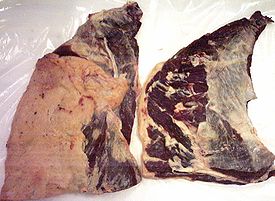 The flank steak, also known as bavette, is a beef
Beef
Beef is the culinary name for meat from bovines, especially domestic cattle. Beef can be harvested from cows, bulls, heifers or steers. It is one of the principal meats used in the cuisine of the Middle East , Australia, Argentina, Brazil, Europe and the United States, and is also important in...
steak
Steak
A steak is a cut of meat . Most are cut perpendicular to the muscle fibers, improving the perceived tenderness of the meat. In North America, steaks are typically served grilled, pan-fried, or broiled. The more tender cuts from the loin and rib are cooked quickly, using dry heat, and served whole...
cut from the abdominal muscles
Abdomen
In vertebrates such as mammals the abdomen constitutes the part of the body between the thorax and pelvis. The region enclosed by the abdomen is termed the abdominal cavity...
of the cow. A relatively long and flat cut of meat, flank steak is used in a variety of dishes including London broil
London Broil
London broil is a North American beef dish made by broiling or grilling marinated flank steak, then cutting it across the grain into thin strips. The origin of the name is obscure; the dish is unknown in London, England.-The cut:...
and fajitas. It is significantly tougher than the other beef cuts; therefore, many recipes use moist cooking methods such as braising
Braising
Braising , is a combination cooking method using both moist and dry heat; typically the food is first seared at a high temperature and then finished in a covered pot with a variable amount of liquid, resulting in a particular flavour...
.

Mexico
Mexico
The United Mexican States , commonly known as Mexico , is a federal constitutional republic in North America. It is bordered on the north by the United States; on the south and west by the Pacific Ocean; on the southeast by Guatemala, Belize, and the Caribbean Sea; and on the east by the Gulf of...
's version of the flank steak has gained fame throughout Latin America
Latin America
Latin America is a region of the Americas where Romance languages  – particularly Spanish and Portuguese, and variably French – are primarily spoken. Latin America has an area of approximately 21,069,500 km² , almost 3.9% of the Earth's surface or 14.1% of its land surface area...
. It originates in the city of Monterrey
Monterrey
Monterrey , is the capital city of the northeastern state of Nuevo León in the country of Mexico. The city is anchor to the third-largest metropolitan area in Mexico and is ranked as the ninth-largest city in the nation. Monterrey serves as a commercial center in the north of the country and is the...
and is known as arrachera in Mexican cuisine
Mexican cuisine
Mexican cuisine, a style of food that originates in Mexico, is known for its varied flavors, colourful decoration and variety of spices and ingredients, most of which are native to the country. The cuisine of Mexico has evolved through thousands of years of blending indigenous cultures, with later...
. It may be tenderized by using commercial tenderizers, or by mechanical tenderizing, using a method to create an even cut. A different version of the arrachera is known as entraña, the difference being that the latter retains a thick layer of the fat surrounding the muscle, making it a juicier and saltier steak.
The French are quite partial to this cut, known as bavette. It is quickly seared in a hot pan and eaten rare to maintain its tenderness. Bavette is frequently served in Parisian bistro
Bistro
A bistro, sometimes spelled bistrot, is, in its original Parisian incarnation, a small restaurant serving moderately priced simple meals in a modest setting. Bistros are defined mostly by the foods they serve. Home cooking with robust earthy dishes, and slow-cooked foods like cassoulet are typical...
s with shallots - "Bavette a l'échalotte". The cut is also popular in Colombia
Colombia
Colombia, officially the Republic of Colombia , is a unitary constitutional republic comprising thirty-two departments. The country is located in northwestern South America, bordered to the east by Venezuela and Brazil; to the south by Ecuador and Peru; to the north by the Caribbean Sea; to the...
, where it is known as sobrebarriga
Sobrebarriga
Sobrebarriga is a cut of beef, also known as flank steak. In Spanish, sobrebarriga literally translates as over the belly. It is particularly known as a Colombian dish....
, literally meaning "over the belly
Abdomen
In vertebrates such as mammals the abdomen constitutes the part of the body between the thorax and pelvis. The region enclosed by the abdomen is termed the abdominal cavity...
".

Flank steak is best when it has a bright red color. Because it comes from a strong, well-exercised part of the cow, it is best prepared when cut across the grain.

Flank steak is frequently used in Asian cuisine
Asian cuisine
Asian cuisine styles can be broken down into several tiny regional styles that have roots in the peoples and cultures of those regions. The major types can be roughly defined as East Asian with its origins in Imperial China and now encompassing modern Japan and the Korean peninsula; Southeast Asian...
, and in Chinese markets it is often sold as "stir-fry beef" because that is how it is usually prepared. Most stir-fried beef dishes in Cantonese
Cantonese cuisine
Cantonese cuisine comes from Guangdong Province in southern China and is one of 8 superdivisions of Chinese cuisine. Its prominence outside China is due to the great numbers of early emigrants from Guangdong. Cantonese chefs are highly sought after throughout the country...
restaurants are prepared with this cut of beef.

McDonald's
McDonald's
McDonald's Corporation is the world's largest chain of hamburger fast food restaurants, serving around 64 million customers daily in 119 countries. Headquartered in the United States, the company began in 1940 as a barbecue restaurant operated by the eponymous Richard and Maurice McDonald; in 1948...
in the United Kingdom uses "100% forequarter and flank" in its burger patties.
The source of this article is wikipedia, the free encyclopedia.  The text of this article is licensed under the GFDL.