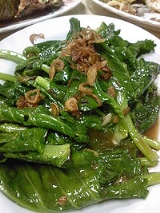 Overview
Cantonese cuisine comes from Guangdong Province in southern China
China
Chinese civilization may refer to:* China for more general discussion of the country.* Chinese culture* Greater China, the transnational community of ethnic Chinese.* History of China* Sinosphere, the area historically affected by Chinese culture...
and is one of 8 superdivisions of Chinese cuisine
Chinese cuisine
Chinese cuisine is any of several styles originating in the regions of China, some of which have become highly popular in other parts of the world – from Asia to the Americas, Australia, Western Europe and Southern Africa...
. Its prominence outside China is due to the great numbers of early emigrants from Guangdong. Cantonese chefs are highly sought after throughout the country. Cantonese food is best known in western world; when people in the West speak of Chinese food, they usually mean Cantonese food.
Canton has long been a trading port and many imported foods and ingredients are used in Cantonese cuisine.