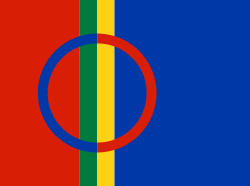 This is a list of flag flying days in Norway.

Dates when the Norwegian state flag
Flag of Norway
The flag of Norway is red with an indigo blue Scandinavian cross outlined in white that extends to the edges of the flag; the vertical part of the cross is shifted to the hoist side in the style of the Dannebrog, the flag of Denmark.- History :...
is flown by all branches of government and state agencies are listed in Article 4 of the regulations concerning the use of the state flag and the merchant flag, as modified by Royal Resolution of 3 December 2004. Civilians are also encouraged to display the national flag on these days. The flag is flown on the birthday of a member of the Norwegian Royal House, on some Christian holidays and on the dates of significant events of Norwegian history.

On the Day of the Sami people
Sami people
The Sami people, also spelled Sámi, or Saami, are the arctic indigenous people inhabiting Sápmi, which today encompasses parts of far northern Sweden, Norway, Finland, the Kola Peninsula of Russia, and the border area between south and middle Sweden and Norway. The Sámi are Europe’s northernmost...
both state institutions and civilians are encouraged but not required to fly the Sami flag
Sami flag
The Sami flag is the flag of the Sámi people, the indigenous nation of the Nordic countries and the Kola Peninsula of the Russian Federation. The flag is also sometimes used to represent the territory of Sápmi, the traditional area of Sámi inhabitance....
in addition to the Norwegian flag.

The Norwegian flag is flown at full staff on the following days: