A fish trap is a trap
Trap (tactic)
A trap is a device intended to catch an intruder or prey. "Trap" may also refer to the tactic of catching or harming an adversary. Conversely it may also mean a hindrance for change, being caught in a trap.-Device:*Animal trapping*Bird trapping...
used for fishing. Fish traps may have the form of a fishing weir
Fishing weir
A fishing weir, or fish weir, is an obstruction placed in tidal waters or wholly or partially across a river, which is designed to hinder the passage of fish. Traditionally they were built from wood or stones. They can be used to trap fish...
or a lobster trap
Lobster trap
Not to be confused with Lobster-tailed potA lobster trap or lobster pot is a portable trap that traps lobsters or crayfish and is used in lobster fishing. A lobster trap can hold several lobsters. Lobster traps are constructed of wire and wood. An opening permits the lobster to enter a tunnel of...
. A typical trap might consist of a frame of thick steel wire in the shape of a heart
Heart
The heart is a myogenic muscular organ found in all animals with a circulatory system , that is responsible for pumping blood throughout the blood vessels by repeated, rhythmic contractions...
, with chicken wire
Chicken wire
Chicken wire, or poultry netting, is a mesh of wire commonly used to fence poultry livestock. It is made of thin, flexible galvanized wire, with hexagonal gaps...
stretched around it. The mesh wraps around the frame and then tapers into the inside of the trap. When a fish swims inside through this opening, it cannot get out, as the chicken wire opening bends back into its original narrowness. In earlier times, traps were constructed of wood and fibre.

Traps are culturally almost universal and seem to have been independently invented many times. There are essentially two types of trap, a permanent or semi-permanent structure placed in a river or tidal area and pot-traps that are baited to attract prey and periodically lifted.

The prehistoric Yaghan
Yaghan
The Yaghan, also called Yagán, Yahgan , Yámana or Yamana, are the indigenous inhabitants of the islands south of Isla Grande de Tierra del Fuego extending their presence into Cape Horn...
people who inhabited the Tierra Del Fuego
Tierra del Fuego
Tierra del Fuego is an archipelago off the southernmost tip of the South American mainland, across the Strait of Magellan. The archipelago consists of a main island Isla Grande de Tierra del Fuego divided between Chile and Argentina with an area of , and a group of smaller islands including Cape...
area constructed stonework in shallow inlets that would effectively confine fish at low tide levels. Some of this extant stonework survives at Bahia Wulaia
Bahia Wulaia
Bahia Wulaia is a bay on the western shore of Isla Navarino along the Murray Channel in extreme southern Chile. The island and adjacent strait are part of the commune of Cabo de Hornos in the Antártica Chilena Province, which is part of the Magallanes and Antartica Chilena Region. There is an...
at the Bahia Wulaia Dome Middens archaeological site.

Indigenous Australians
Indigenous Australians
Indigenous Australians are the original inhabitants of the Australian continent and nearby islands. The Aboriginal Indigenous Australians migrated from the Indian continent around 75,000 to 100,000 years ago....
were, prior to European colonisation, most populous in Australia's better-watered areas such as the Murray-Darling
Murray-Darling Basin
The Murray-Darling basin is a large geographical area in the interior of southeastern Australia, whose name is derived from its two major rivers, the Murray River and the Darling River. It drains one-seventh of the Australian land mass, and is currently by far the most significant agricultural...
river system of the south-east. Here, where water levels fluctuate seasonally, indigenous people constructed ingenious stone fish traps. Most have been completely or partially destroyed. The largest and best-known are those on the Barwon River at Brewarrina, New South Wales
Brewarrina, New South Wales
Brewarrina is a small town in North West New South Wales, Australia on the banks of the Barwon River in Brewarrina Shire. It is 98 km east of Bourke and west of Walgett on the Kamilaroi Highway, and 808 km from Sydney. Brewarrina has had its population decrease from 1,197 persons in...
, which are at least partly preserved. The Brewarrina fish traps caught huge numbers of migratory native fish as the Barwon River rose in flood and then fell. In southern Victoria
Victoria (Australia)
Victoria is the second most populous state in Australia. Geographically the smallest mainland state, Victoria is bordered by New South Wales, South Australia, and Tasmania on Boundary Islet to the north, west and south respectively....
, indigenous people created an elaborate system of canals, some more than 2 km long. The purpose of these canals was to attract and catch eel
Eel
Eels are an order of fish, which consists of four suborders, 20 families, 111 genera and approximately 800 species. Most eels are predators...
s, a fish of short coastal rivers (as opposed to rivers of the Murray-Darling system). The eels were caught by a variety of traps including stone walls constructed across canals with a net placed across an opening in the wall. Traps at different levels in the marsh came into operation as the water level rose and fell. Somewhat similar stone-wall traps were constructed by native American
Indigenous peoples of the Americas
The indigenous peoples of the Americas are the pre-Columbian inhabitants of North and South America, their descendants and other ethnic groups who are identified with those peoples. Indigenous peoples are known in Canada as Aboriginal peoples, and in the United States as Native Americans...
Pit River
Pit River
The Pit River is a major river draining from northeastern California into the state's Central Valley. The Pit, the Klamath and the Columbia are the only three rivers in the U.S...
people in north-eastern California
California
California is a state located on the West Coast of the United States. It is by far the most populous U.S. state, and the third-largest by land area...
.

A technique called dam
Dam
A dam is a barrier that impounds water or underground streams. Dams generally serve the primary purpose of retaining water, while other structures such as floodgates or levees are used to manage or prevent water flow into specific land regions. Hydropower and pumped-storage hydroelectricity are...
fishing is used by the Baka
Baka (Cameroon and Gabon)
The Baka, known in the Congo as Bayaka , are an ethnic group inhabiting the southeastern rainforests of Cameroon, northern Republic of Congo, northern Gabon, and southwestern Central African Republic. They are sometimes called a subgroup of the Twa, but the two peoples are not closely related...
pygmies. This involves the construction of a temporary dam resulting in a drop in the water levels downstream— allowing fish to be easily collected. 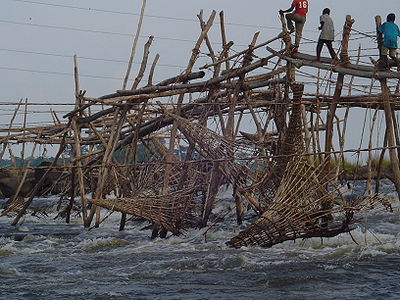 The manner in which fish traps are used depends on local conditions and the behaviour of the local fish. For example, a fish trap might be placed in shallow water near rocks where pikes like to lie. If placed correctly, traps can be very effective. It is usually not necessary to check the trap daily, since the fish remain alive inside the trap, relatively unhurt. Because of this, the trap also allows for the release of undersized fish as per fishing regulations.

The Wagenya
Wagenya
Wagenya is the name of a place in the Democratic Republic of the Congo and of the people living there; situated in the northern part of Congo, by the city of Kisangani....
people, in the Congo
Democratic Republic of the Congo
The Democratic Republic of the Congo is a state located in Central Africa. It is the second largest country in Africa by area and the eleventh largest in the world...
, build a huge system of wooden tripods across the river. These tripods are anchored on the holes naturally carved in the rock by the water current. To these tripods are anchored large baskets, which are lowered in the rapids to "sieve" the waters for fish. The baskets are designed and sized to trap only large fish. The Wagenya lift the baskets twice daily to check for fish, which are retrieved by swimmers.

In the Great Lakes Region
Great Lakes region (North America)
The Great Lakes region of North America, occasionally known as the Third Coast or the Fresh Coast , includes the eight U.S. states of Illinois, Indiana, Michigan, Minnesota, New York, Ohio, Pennsylvania and Wisconsin as well as the Canadian province of Ontario...
of the United States, fishermen submerse a long, visible mesh wall running perpendicular to the shoreline that guides fish (who instinctively swim towards deeper water when coming upon a large obstacle) into a maze that ends in a large mesh "pot", that can be raised up to the boat to haul the fish in. This method of fishing results in fish staying alive until the time they are hauled into the boat, as against being entangled and killed in a gill net. This method also allows for sportfish and other protected species to be released without harm.

In Finland
Finland
Finland , officially the Republic of Finland, is a Nordic country situated in the Fennoscandian region of Northern Europe. It is bordered by Sweden in the west, Norway in the north and Russia in the east, while Estonia lies to its south across the Gulf of Finland.Around 5.4 million people reside...
, the portable fish trap called katiska is made from chicken wire
Chicken wire
Chicken wire, or poultry netting, is a mesh of wire commonly used to fence poultry livestock. It is made of thin, flexible galvanized wire, with hexagonal gaps...
. It is lightweight and enables easy portability of the traps. The trap can either be collapsible or rigid, and is easily placed at any depth, as it needs no anchoring.