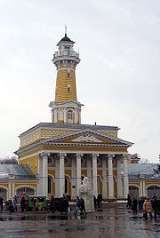 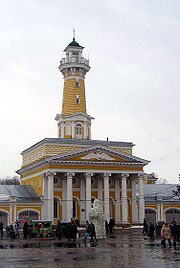 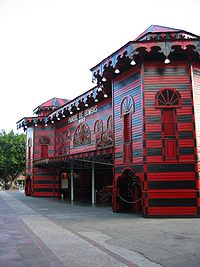 A fire station is a structure or other area set aside for storage of firefighting apparatus (i.e., fire engines
Fire apparatus
A fire apparatus, fire engine, fire truck, or fire appliance is a vehicle designed to assist in fighting fires by transporting firefighters to the scene and providing them with access to the fire, along with water or other equipment...
and related vehicles), personal protective equipment
Personal protective equipment
Personal protective equipment refers to protective clothing, helmets, goggles, or other garment or equipment designed to protect the wearer's body from injury by blunt impacts, electrical hazards, heat, chemicals, and infection, for job-related occupational safety and health purposes, and in...
, fire hose
Fire hose
A fire hose is a high-pressure hose used to carry water or other fire retardant to a fire to extinguish it. Outdoors, it is attached either to a fire engine or a fire hydrant. Indoors, it can be permanently attached to a building's standpipe or plumbing system...
, fire extinguisher
Fire extinguisher
A fire extinguisher or extinguisher, flame entinguisher is an active fire protection device used to extinguish or control small fires, often in emergency situations...
s, and other fire extinguishing equipment. It may also have dormitory living facilities and work areas such as meeting rooms workshop, or laundry. Living areas are sometimes arranged above the garage bays where personnel without specific station duties during the night shift are allowed to sleep unless a dispatch
Dispatch (logistics)
Dispatch is a procedure for assigning employees or vehicles to customers. Industries that dispatch include taxicabs, couriers, emergency services, as well as home and commercial services such as maid services, plumbing, HVAC, pest control and electricians.With vehicle dispatching, clients are...
is called. In that situation, firefighter
Firefighter
Firefighters are rescuers extensively trained primarily to put out hazardous fires that threaten civilian populations and property, to rescue people from car incidents, collapsed and burning buildings and other such situations...
s may have special means to allow entry to the ground floor quickly when a call for help
Distress signal
A distress signal is an internationally recognized means for obtaining help. Distress signals take the form of or are commonly made by using radio signals, displaying a visually detected item or illumination, or making an audible sound, from a distance....
is received such as sliding down a brass pole (called a firepole). This arrangement also allows for a raised area to hang hoses to dry to prevent damage. In a single story station, a tower like structure is sometimes used specially for hose hanging.
An occupied station will usually have a station alarm system for receiving and annunciating an alarm, and indications of where and what caused the alarm. However, sometimes the only "alarm" is a telephone that is rung in case of emergency. In a volunteer fire department
Volunteer fire department
See also the Firefighter article and its respective sections regarding VFDs in other countries.A volunteer fire department is a fire department composed of volunteers who perform fire suppression and other related emergency services for a local jurisdiction.The first organized force of...
where volunteers do not staff the station, the firefighters may be summoned to the fire station by siren
Siren (noisemaker)
A siren is a loud noise making device. Most modern ones are civil defense or air raid sirens, tornado sirens, or the sirens on emergency service vehicles such as ambulances, police cars and fire trucks. There are two general types: pneumatic and electronic....
, radio
Radio
Radio is the transmission of signals through free space by modulation of electromagnetic waves with frequencies below those of visible light. Electromagnetic radiation travels by means of oscillating electromagnetic fields that pass through the air and the vacuum of space...
or pager
Pager
A pager is a simple personal telecommunications device for short messages. A one-way numeric pager can only receive a message consisting of a few digits, typically a phone number that the user is then requested to call...
s, making a station alarm system superfluous.

In a more structured operation, full-time or on-call volunteer or career firefighters staff the station some or all of the time. There may be office space for the officers, a library of reference and other materials, and a "trophy wall" or case where the firefighters display memorabilia.

Activities in a fire station include regular inspection and cleaning of the apparatus and equipment, and continuing education in the fire service. Weekly or bi-weekly routine typically includes various drills in which firefighters practice their skills. Some fire companies also host public activities at the fire station during annual "fire prevention week" or similar, and the facility may also be used for fund-raising by the "firemen's association", "fire buffs", or "fire auxiliary."

The approaches to a fire station are often posted with warning signs, and there may be a traffic signal to stop or warn traffic when apparatus are leaving or returning to the station.

In many western countries, fire brigades were originally created by insurance companies to safeguard the property of their policyholders. Those who bought policies were given a plaque
Fire insurance marks
Fire insurance marks were lead or copper plaques embossed with the sign of the insurance company, and placed on the front of the insured building as a guide to the insurance company's fire brigade. They are common in the older areas of Britain's and America's cities and larger towns...
that would be mounted in a prominent position on the structure to denote its protected status. These plaques can still be seen on some historic buildings, particularly in the United Kingdom
United Kingdom
The United Kingdom of Great Britain and Northern IrelandIn the United Kingdom and Dependencies, other languages have been officially recognised as legitimate autochthonous languages under the European Charter for Regional or Minority Languages...
. Firemen summoned to burning buildings were expected to look for these plaques before fighting the fire. If the fire was in a building covered by a rival insurer, some brigades would deliberately obstruct that company's fire brigade in an attempt to give rise to greater property damage (and subsequent expense to the insurer) .