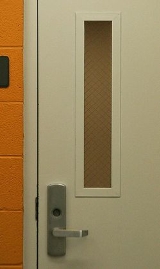 A fire door is a door
Door
A door is a movable structure used to open and close off an entrance, typically consisting of a panel that swings on hinges or that slides or rotates inside of a space....
with a fire-resistance rating
Fire-resistance rating
A fire-resistance rating typically means the duration for which a passive fire protection system can withstand a standard fire resistance test. This can be quantified simply as a measure of time, or it may entail a host of other criteria, involving other evidence of functionality or fitness for...
(sometimes referred to as a fire protection rating for closures) used as part of a passive fire protection
Passive fire protection
Passive fire protection is an integral component of the three components of structural fire protection and fire safety in a building. PFP attempts to contain fires or slow the spread, through use of fire-resistant walls, floors, and doors...
system to reduce the spread of fire
Fire
Fire is the rapid oxidation of a material in the chemical process of combustion, releasing heat, light, and various reaction products. Slower oxidative processes like rusting or digestion are not included by this definition....
or smoke
Smoke
Smoke is a collection of airborne solid and liquid particulates and gases emitted when a material undergoes combustion or pyrolysis, together with the quantity of air that is entrained or otherwise mixed into the mass. It is commonly an unwanted by-product of fires , but may also be used for pest...
between compartments
Compartmentalization (fire protection)
Compartmentalization in structures, such as land-based buildings, traffic tunnels, ships, aerospace vehicles, or submarines, is the fundamental basis and aim of passive fire protection....
and to enable safe egress from a building
Building
In architecture, construction, engineering, real estate development and technology the word building may refer to one of the following:...
or structure or ship. In North America
North America
North America is a continent wholly within the Northern Hemisphere and almost wholly within the Western Hemisphere. It is also considered a northern subcontinent of the Americas...
n building code
Building code
A building code, or building control, is a set of rules that specify the minimum acceptable level of safety for constructed objects such as buildings and nonbuilding structures. The main purpose of building codes are to protect public health, safety and general welfare as they relate to the...
s, it, along with fire damper
Fire damper
Fire dampers are passive fire protection products used in heating, ventilation, and air conditioning ducts to prevent the spread of fire inside the ductwork through fire-resistance rated walls and floors. Fire/Smoke dampers Are similar to Fire Dampers in fire resistance rating, and also prevent...
s, is often referred to as a closure, which can be derated compared against the fire separation that contains it, provided that this barrier is not a firewall
Firewall (construction)
A firewall is a fireproof barrier used to prevent the spread of fire between or through buildings, structures, electrical substation transformers, or within an aircraft or vehicle.- Applications :...
or an occupancy
Occupancy
Occupancy in building construction and building codes is the use or intended use of a building or part thereof for the shelter or support of persons, animals or property. A closely related meaning is the number of units in such a building that are rented or leased, or otherwise in-use...
separation.
Fire doors may be made of a combination of materials, such as:

Both the door
Door
A door is a movable structure used to open and close off an entrance, typically consisting of a panel that swings on hinges or that slides or rotates inside of a space....
leaf (the swinging panel of the door) and the door frame are required to meet the guidelines of the testing agency which provides the product listing.

What side of a fire rated door do you check the 1/8 gap?
More
x