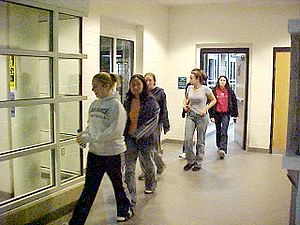 A fire drill is a method of practicing the evacuation of a building for a fire
Fire
Fire is the rapid oxidation of a material in the chemical process of combustion, releasing heat, light, and various reaction products. Slower oxidative processes like rusting or digestion are not included by this definition....
or other emergency
Emergency
An emergency is a situation that poses an immediate risk to health, life, property or environment. Most emergencies require urgent intervention to prevent a worsening of the situation, although in some situations, mitigation may not be possible and agencies may only be able to offer palliative...
. Generally, the emergency system (usually an alarm) is activated and the building is evacuated as though a real fire had occurred. Usually, the time it takes to evacuate is measured to ensure that it occurs within a reasonable length of time.

Many jurisdictions require that fire drills be conducted at certain intervals. This is most often the case in elementary
Elementary school
An elementary school or primary school is an institution where children receive the first stage of compulsory education known as elementary or primary education. Elementary school is the preferred term in some countries, particularly those in North America, where the terms grade school and grammar...
, middle
Middle school
Middle School and Junior High School are levels of schooling between elementary and high schools. Most school systems use one term or the other, not both. The terms are not interchangeable...
, and high
High school
High school is a term used in parts of the English speaking world to describe institutions which provide all or part of secondary education. The term is often incorporated into the name of such institutions....
schools, but sometimes other places as well. Often the frequency of such drills and any special actions that must be taken during such drills are listed in the statute.

In the United States, school fire drill regulations are set by individual states.