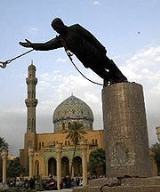 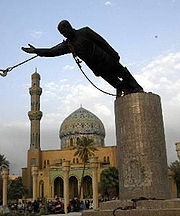 Firdaus Square, or Firdos Square ' onMouseout='HidePop("15492")' href="/topics/Arabic_transliteration">transliterated
Arabic transliteration
Different approaches and methods for the romanization of Arabic exist. They vary in the way that they address the inherent problems of rendering written and spoken Arabic in the Latin alphabet; they also use different symbols for Arabic phonemes that do not exist in English or other European...
: Sahat al-Firdaus), is a public open space in Baghdad
Baghdad
Baghdad is the capital of Iraq, as well as the coterminous Baghdad Governorate. The population of Baghdad in 2011 is approximately 7,216,040...
, Iraq
Iraq
Iraq ; officially the Republic of Iraq is a country in Western Asia spanning most of the northwestern end of the Zagros mountain range, the eastern part of the Syrian Desert and the northern part of the Arabian Desert....
. It is named after the Arabic
Arabic language
Arabic is a name applied to the descendants of the Classical Arabic language of the 6th century AD, used most prominently in the Quran, the Islamic Holy Book...
word Firdows, which literally means "paradise". It is the location of two of the best-known hotels, the Palestine Hotel
Palestine Hotel
The Palestine Hotel , often referred to simply as The Palestine, is an 18-story hotel in Baghdad, Iraq located on Firdos Square, across from the Sheraton Ishtar. It has long been favored by journalists and media personnel...
and the Sheraton Ishtar
Sheraton Ishtar
The Ishtar Sheraton Hotel is a hotel in Baghdad, Iraq located on Firdos Square. It is the tallest building in Baghdad, and the tallest structure in Iraq after the Baghdad Tower....
, which are the two tallest buildings in Baghdad. The square was the site of the statue of Saddam Hussein
Saddam Hussein
Saddam Hussein Abd al-Majid al-Tikriti was the fifth President of Iraq, serving in this capacity from 16 July 1979 until 9 April 2003...
that was torn down by U.S. coalition forces in a widely-televised event
Firdos Square statue destruction
The destruction of the Firdos Square statue was an event in the 2003 Invasion of Iraq and marked the symbolic end of the Battle of Baghdad. It is an instance of iconoclasm.-Meaning:...
during the 2003 invasion of Iraq
2003 invasion of Iraq
The 2003 invasion of Iraq , was the start of the conflict known as the Iraq War, or Operation Iraqi Freedom, in which a combined force of troops from the United States, the United Kingdom, Australia and Poland invaded Iraq and toppled the regime of Saddam Hussein in 21 days of major combat operations...
. A green, abstract sculpture
Sculpture
Sculpture is three-dimensional artwork created by shaping or combining hard materials—typically stone such as marble—or metal, glass, or wood. Softer materials can also be used, such as clay, textiles, plastics, polymers and softer metals...
by Bassem Hamad al-Dawiri
Bassem Hamad al-Dawiri
Bassem Hamad al-Dawiri was an Iraqi sculptor and artist. He helped create a Baghdad artist association, called the "Survivors' Group" following the fall of the Saddam Hussein government in 2003.Al-Dawiri was born in Iraq...
now stands on the site of the former statue.

The statue was pulled down by American forces during the Iraq War in 2003, in front of a crowd of around a hundred Iraqis. The event was widely televised, and some of this footage was criticized for exaggerating the size of the crowd. Robert Fisk
Robert Fisk
Robert Fisk is an English writer and journalist from Maidstone, Kent. As Middle East correspondent of The Independent, he has primarily been based in Beirut for more than 30 years. He has published a number of books and has reported on the United States's war in Afghanistan and the same country's...
described it as "the most staged photo opportunity since Iwo Jima
Iwo Jima
Iwo Jima, officially , is an island of the Japanese Volcano Islands chain, which lie south of the Ogasawara Islands and together with them form the Ogasawara Archipelago. The island is located south of mainland Tokyo and administered as part of Ogasawara, one of eight villages of Tokyo...
".

On April 9, 2005, the second anniversary of the invasion of Baghdad
2003 invasion of Baghdad
The Battle of Baghdad also known as the Fall of Baghdad was a military invasion of Baghdad that took place in early April 2003, as part of the invasion of Iraq....
, the square was the center of a large-scale demonstration from tens of thousands of Iraqis protesting the American occupation. The demonstration was organized by Moqtada Sadr, a Shi'ite cleric, and supported by Sheikh Abd al-Zahra al-Suwaid a follower of the Green Party. Suwaid was quoted as stating to the gathered "The rally must be peaceful. You should demand the withdrawal of the occupation forces and press for quicker trials for Saddam Hussein and his aides before an Iraqi court."