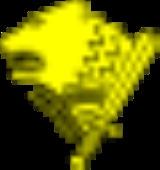 Encyclopedia
The Finnish Border guard
Border guard
The border guard, frontier guard, border patrol, border police, or frontier police of a country is a national security agency that performs border control, i.e., enforces the security of the country's national borders....
(Finnish
Finnish language
Finnish is the language spoken by the majority of the population in Finland Primarily for use by restaurant menus and by ethnic Finns outside Finland. It is one of the two official languages of Finland and an official minority language in Sweden. In Sweden, both standard Finnish and Meänkieli, a...
: Rajavartiolaitos, Swedish
Swedish language
Swedish is a North Germanic language, spoken by approximately 10 million people, predominantly in Sweden and parts of Finland, especially along its coast and on the Åland islands. It is largely mutually intelligible with Norwegian and Danish...
: Gränsbevakningsväsendet) is the national security
National security
National security is the requirement to maintain the survival of the state through the use of economic, diplomacy, power projection and political power. The concept developed mostly in the United States of America after World War II...
agency responsible for enforcing the security of Finland
Finland
Finland , officially the Republic of Finland, is a Nordic country situated in the Fennoscandian region of Northern Europe. It is bordered by Sweden in the west, Norway in the north and Russia in the east, while Estonia lies to its south across the Gulf of Finland.Around 5.4 million people reside...
's borders. It is a military
Military
A military is an organization authorized by its greater society to use lethal force, usually including use of weapons, in defending its country by combating actual or perceived threats. The military may have additional functions of use to its greater society, such as advancing a political agenda e.g...
organization, subordinate to the Ministry of the Interior
Politics of Finland
Politics of Finland takes place in a framework of a parliamentary representative democratic republic and of a multi-party system. The President of Finland is the head of state, leads the foreign policy, and is the Commander-in-chief of the Defense Forces. The Prime Minister of Finland is the head...
in administrative issues and to the President of the Republic in issues pertaining to the president's authority as Commander-in-Chief
Commander-in-Chief
A commander-in-chief is the commander of a nation's military forces or significant element of those forces. In the latter case, the force element may be defined as those forces within a particular region or those forces which are associated by function. As a practical term it refers to the military...
(e.g. officer promotions).

The border guard's personnel consists of 3,600 men and women, including 500 conscripts who are not used for border control during peace time. Upon mobilisation the Border Guard would be wholly or partly incorporated into the Finnish Defence Forces
Finnish Defence Forces
The Finnish Defence Forces are responsible for the defence of Finland. It is a cadre army of 15,000, of which 8,900 are professional soldiers , extended with conscripts and reservists such that the standard readiness strength is 34,700 people in uniform...
and its strength increased with reservists who have served their conscription in the border guard. The mobilized strength of the Border Guard is 11 600 persons.

For the discharge of its duties, the Border Guard has limited police powers in the areas where it operates. It can, for example, seize and arrest persons and conduct searches in apartments and cars pursuant to same legislation as the police, when investigating a crime. However, the power to arrest a person has been delegated only to the commanding officers of a border control detachments and commanders and vice-commanders of larger units. The Border Guard is not supposed to be used for the keeping of public order under normal circumstances but it has quick response teams that can be used to support the police in exceptional situations. This has been done several times in recent history to supplement riot police during high profile international events where there is a considerable danger of violent demonstrations. The Border Guard also has the power to keep public order in its own facilities and in their immediate vicinity. For the execution of its military exercises, any officer with the minimum rank of captain can close an area temporarily.

The Border Guard is responsible for enforcing the 3–5 km border zone
Border zone
Border zones are areas near borders of states that have special restrictions to movement. Governments may forbid unauthorized entry to border zones and restrict property ownership in the area. The zones function as buffer zones specifically monitored by border patrols in order to prevent illegal...
towards Russia and issues the permits to visit the zone.

The Border Guard operates 13 aircraft, including 11 helicopters. The remaining Bell 206s and possibly the oldest AB 412 are to be replaced by AW119s. 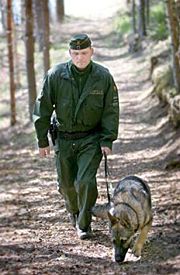 After the Finnish Civil War
Finnish Civil War
The Finnish Civil War was a part of the national, political and social turmoil caused by World War I in Europe. The Civil War concerned control and leadership of The Grand Duchy of Finland as it achieved independence from Russia after the October Revolution in Petrograd...
in 1919, the control of the Finnish borders was given to the frontier troops under the command of the Ministry of Interior. Until 1945, only the Russian border was supervised by the Frontier Guard, the Swedish and Norwegian borders having only customs control. In 1929, a separate Sea Guard was founded to prevent the rampant alcohol smuggling caused by the Finnish prohibition
Prohibition
Prohibition of alcohol, often referred to simply as prohibition, is the practice of prohibiting the manufacture, transportation, import, export, sale, and consumption of alcohol and alcoholic beverages. The term can also apply to the periods in the histories of the countries during which the...
of alcohol (1919–32).

At the start of the Winter War
Winter War
The Winter War was a military conflict between the Soviet Union and Finland. It began with a Soviet offensive on 30 November 1939 – three months after the start of World War II and the Soviet invasion of Poland – and ended on 13 March 1940 with the Moscow Peace Treaty...
there were nine Border Companies (Rajakomppania) on the Karelian Isthmus
Karelian Isthmus
The Karelian Isthmus is the approximately 45–110 km wide stretch of land, situated between the Gulf of Finland and Lake Ladoga in northwestern Russia, to the north of the River Neva . Its northwestern boundary is the relatively narrow area between the Bay of Vyborg and Lake Ladoga...
. North of Lake Ladoga
Lake Ladoga
Lake Ladoga is a freshwater lake located in the Republic of Karelia and Leningrad Oblast in northwestern Russia, not far from Saint Petersburg. It is the largest lake in Europe, and the 14th largest lake by area in the world.-Geography:...
the Frontier Guards were combined into six Detached Battalions (Erillinen pataljoona). Further north in Petsamo the defence was left to the 10th Detached Company (10. Erillinen komppania). After the war marshal Mannerheim
Carl Gustaf Emil Mannerheim
Baron Carl Gustaf Emil Mannerheim was the military leader of the Whites in the Finnish Civil War, Commander-in-Chief of Finland's Defence Forces during World War II, Marshal of Finland, and a Finnish statesman. He was Regent of Finland and the sixth President of Finland...
awarded all frontier guards the title "Border jäger
Finnish Jäger troops
The Jäger Movement were volunteers from Finland trained in Germany as Jägers during World War I. Supported by Germany to enable a Finnish sovereign state, it was one of many means by which Germany intended to weaken Russia and to cause Russia's loss of western provinces and...
" (Rajajääkäri).

During the Continuation War
Continuation War
The Continuation War was the second of two wars fought between Finland and the Soviet Union during World War II.At the time of the war, the Finnish side used the name to make clear its perceived relationship to the preceding Winter War...
, the Frontier Guard companies were combined into 8 Border Jäger battalions (Rajajääkäripataljoona) and later during the Lapland War
Lapland War
The Lapland War were the hostilities between Finland and Nazi Germany between September 1944 and April 1945, fought in Finland's northernmost Lapland Province. While the Finns saw this as a separate conflict much like the Continuation War, German forces considered their actions to be part of the...
into a Border Jäger Brigade (Rajajääkäriprikaati).

After the Second World War, the Border Guards were placed on all Finnish borders. In 1950s, the Sea Guard was attached to the Border Guard. Since then, the Border Guard has received a fine public image. It is famed for the wilderness skills of its guards foot-patrolling the forest-covered Russian border, its good efficiency in catching the few illegal border crossers and for the fact that it is the only state authority in large parts of Lapland. In these matters it resembles the popular image of the Royal Canadian Mounted Police
Royal Canadian Mounted Police
The Royal Canadian Mounted Police , literally ‘Royal Gendarmerie of Canada’; colloquially known as The Mounties, and internally as ‘The Force’) is the national police force of Canada, and one of the most recognized of its kind in the world. It is unique in the world as a national, federal,...
. The Border Guard of Finland is one of the links of the chain of protectors of the external borders of the European Union
European Union
The European Union is an economic and political union of 27 independent member states which are located primarily in Europe. The EU traces its origins from the European Coal and Steel Community and the European Economic Community , formed by six countries in 1958...
and Schengen agreement
Schengen Agreement
The Schengen Agreement is a treaty signed on 14 June 1985 near the town of Schengen in Luxembourg, between five of the ten member states of the European Economic Community. It was supplemented by the Convention implementing the Schengen Agreement 5 years later...
.

Nearly every Border Guard District trains small number of conscripts for long range reconnaissance. Conscripts in Border Guard companies are mostly volunteers and preferably selected from the occupants of border areas, and while trained by Border Guard, they do not perform regular border control duties. Rivalry between Sissi troops from Border Guard and Defence Forces is traditionally high.

Employment in Border Guard is much sought for, especially in North and Eastern Finland, which suffer from chronic unemployment problems. Typically a vacancy in the Border Guard receives at least 50 applications.