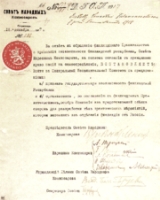 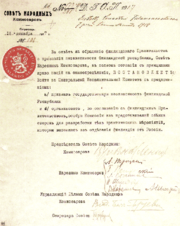 The Finnish declaration of independence was adopted by the Parliament of Finland
Parliament of Finland
The Eduskunta , is the parliament of Finland. The unicameral parliament has 200 members and meets in the Parliament House in Helsinki. The latest election to the parliament took place on April 17, 2011.- Constitution :...
on 6 December 1917. It declared Finland
Finland
Finland , officially the Republic of Finland, is a Nordic country situated in the Fennoscandian region of Northern Europe. It is bordered by Sweden in the west, Norway in the north and Russia in the east, while Estonia lies to its south across the Gulf of Finland.Around 5.4 million people reside...
an independent
Independence
Independence is a condition of a nation, country, or state in which its residents and population, or some portion thereof, exercise self-government, and usually sovereignty, over its territory....
and sovereign
Sovereignty
Sovereignty is the quality of having supreme, independent authority over a geographic area, such as a territory. It can be found in a power to rule and make law that rests on a political fact for which no purely legal explanation can be provided...
nation state rather than an autonomous Russian Grand duchy
Grand duchy
A grand duchy, sometimes referred to as a grand dukedom, is a territory whose head of state is a monarch, either a grand duke or grand duchess.Today Luxembourg is the only remaining grand duchy...
.

The February Revolution
February Revolution
The February Revolution of 1917 was the first of two revolutions in Russia in 1917. Centered around the then capital Petrograd in March . Its immediate result was the abdication of Tsar Nicholas II, the end of the Romanov dynasty, and the end of the Russian Empire...
of 1917, and even more so the October Revolution
October Revolution
The October Revolution , also known as the Great October Socialist Revolution , Red October, the October Uprising or the Bolshevik Revolution, was a political revolution and a part of the Russian Revolution of 1917...
, had also ignited hopes in the Grand Duchy of Finland
Grand Duchy of Finland
The Grand Duchy of Finland was the predecessor state of modern Finland. It existed 1809–1917 as part of the Russian Empire and was ruled by the Russian czar as Grand Prince.- History :...
. After the abdication
Abdication
Abdication occurs when a monarch, such as a king or emperor, renounces his office.-Terminology:The word abdication comes derives from the Latin abdicatio. meaning to disown or renounce...
of Grand Duke Nicholas II
Nicholas II of Russia
Nicholas II was the last Emperor of Russia, Grand Prince of Finland, and titular King of Poland. His official short title was Nicholas II, Emperor and Autocrat of All the Russias and he is known as Saint Nicholas the Passion-Bearer by the Russian Orthodox Church.Nicholas II ruled from 1894 until...
on 15 March 1917, the personal union
Personal union
A personal union is the combination by which two or more different states have the same monarch while their boundaries, their laws and their interests remain distinct. It should not be confused with a federation which is internationally considered a single state...
between Russia and Finland lost its legal base – at least according to the view in Helsinki
Helsinki
Helsinki is the capital and largest city in Finland. It is in the region of Uusimaa, located in southern Finland, on the shore of the Gulf of Finland, an arm of the Baltic Sea. The population of the city of Helsinki is , making it by far the most populous municipality in Finland. Helsinki is...
.

On 5 November, the Parliament had consequently declared itself to be "the possessor of supreme State power" in Finland, based on Finland's Constitution, and more precisely on §38 in the old Instrument of Government of 1772, which had been enacted by the Estates
Riksdag of the Estates
The Riksdag of the Estates , was the name used for the Estates of the Swedish realm when they were assembled. Until its dissolution in 1866, the institution was the highest authority in Sweden next to the King...
after Gustav III
Gustav III of Sweden
Gustav III was King of Sweden from 1771 until his death. He was the eldest son of King Adolph Frederick and Queen Louise Ulrica of Sweden, she a sister of Frederick the Great of Prussia....
's bloodless coup.

Over a period of several months, the Finnish Civil War
Finnish Civil War
The Finnish Civil War was a part of the national, political and social turmoil caused by World War I in Europe. The Civil War concerned control and leadership of The Grand Duchy of Finland as it achieved independence from Russia after the October Revolution in Petrograd...
waged on, eventually ending in decisive victory for the White Government and the Germans, forcing the Red Russian government to accept Finnish independence, as the Russians moved to defeat Ukrainian and Turkish uprising in Southwestern and Central Russia.

On 15 November 1917, the Bolshevik
Bolshevik
The Bolsheviks, originally also Bolshevists , derived from bol'shinstvo, "majority") were a faction of the Marxist Russian Social Democratic Labour Party which split apart from the Menshevik faction at the Second Party Congress in 1903....
s declared a general right of self-determination
Self-determination
Self-determination is the principle in international law that nations have the right to freely choose their sovereignty and international political status with no external compulsion or external interference...
, including the right of complete secession
Secession
Secession is the act of withdrawing from an organization, union, or especially a political entity. Threats of secession also can be a strategy for achieving more limited goals.-Secession theory:...
, "for the Peoples of Russia"
Declaration of Rights of Peoples of Russia
The Declaration of the Rights of the Peoples of Russia was a document promulgated by the Bolshevik government of Russia on November 15 , 1917 .The document proclaimed:...
. On the same day the Finnish Parliament issued a declaration by which it assumed, pro tempore
Pro tempore
Pro tempore , abbreviated pro tem or p.t., is a Latin phrase which best translates to "for the time being" in English. This phrase is often used to describe a person who acts as a locum tenens in the absence of a superior, such as the President pro tempore of the United States Senate.Legislative...
, all powers of the Sovereign in Finland.

The old Instrument of Government was however no longer deemed suitable. Leading circles had long held monarchism and hereditary nobility
Nobility
Nobility is a social class which possesses more acknowledged privileges or eminence than members of most other classes in a society, membership therein typically being hereditary. The privileges associated with nobility may constitute substantial advantages over or relative to non-nobles, or may be...
to be antiquated, and advocated a republican constitution for Finland.

On 18 December (31 December N. S. ) the Soviet Russian government issued a Decree
Soviet Decrees
Decrees were legislative acts of the highest Soviet institutions, primarily of the Council of People's Commissars and of the Supreme Soviet or VTsIK , issued between 1917 and 1924...
, recognizing Finland's independence, and on December 22 (January 4, 1918 N. S.) it was approved by the highest Soviet executive body – VTsIK.


The Declaration and 15 November

The people of Finland have by this step taken their fate in their own hands; a step both justified and demanded by present conditions. The people of Finland feel deeply that they cannot fulfil their national and international duty without complete sovereignty. The century-old desire for freedom awaits fulfilment now; Finland's people step forward as a free nation among the other nations in the world.

(...) The people of Finland dare to confidently await how other nations in the world recognize that with their full independence and freedom, the people of Finland can do their best in fulfilment of those purposes that will win them a place amongst civilized peoples.


Text of Finland’s Declaration of Independence

To The Finnish People.

The Finnish Parliament has on 15th day of the last November, in support of Section 38 of the Constitution, declared to be the Supreme holder of the State Authority as well as set up a Government to the country, that has taken to its primary task the realization and safeguarding Finland’s independence as a state. The people of Finland have by this step taken their fate in their own hands: a step both justified and demanded by present conditions. The people of Finland feel deeply that they cannot fulfil their national duty and their universal human obligations without a complete sovereignty. The century-old desire for freedom awaits fulfilment now; The People of Finland has to step forward as an independent nation among the other nations in the world.

Achieving this goal requires mainly some measures by the Parliament. Finland’s current form of government, which is currently incompatible with the conditions, requires a complete renewal and therefore has the Government now submitted a proposition for a new Constitution to the Parliament’s council, a proposition that is based on the principle that Finland is to be a sovereign republic. Considering that, the main features of the new polity has to be carried into effect immediately, the Government has at the same time delivered a bill of acts in this matter, which mean to satisfy the most urgent renewal needs before the establishment of the new Constitution.

The same goal also calls for measures from the part of the Government. The Government will approach foreign powers to seek an international recognition of our country’s independence as a state. At the present moment this is particularly all the more necessary, when the grave situation caused by the country’s complete isolation, famine and unemployment compels the Government to establish actual relations to the foreign powers, which prompt assistance in satisfying the necessities of life and in importing the essential goods for the industry, are our only rescue from the imminent famine and industrial stagnation.

The Russian people have, after subverting the Tsarist Regime, in a number of occasions expressed its intention to favour the Finnish people the right to determine its own fate, which is based on its centuries-old cultural development. And widely over all the horrors of the war is heard a voice, that one of the goals of the present war is to be, that no nation shall be forced against its will to be dependent on another (nation). The Finnish people believe that the free Russian people and its constitutive National Assembly don’t want to prevent Finland’s aspiration to enter the multitude of the free and independent nations. At the same time the People of Finland dare to hope that the other nations of the world recognizes, that with their full independence and freedom the People of Finland can do their best in fulfilment of those purposes that will win them an independent position amongst the people of the civilized world.

At the same time as the Government has wanted to let all the Finnish citizens to know these words, the Government turns to the citizens, as well as the private and public authorities, calling everyone on their own behalf with rapt attention to follow the (law and) order by filling their patriotic duty, to strain all their strength for achieving the nations common goal in this point of time, which has such an importance and decisiveness, that there have never before been in the life of the Finnish people. In Helsinki, 4th of December 1917.

Hardship burdened the common people, which already had resulted in alarming polarization, and soon would ignite the Civil War
Finnish Civil War
The Finnish Civil War was a part of the national, political and social turmoil caused by World War I in Europe. The Civil War concerned control and leadership of The Grand Duchy of Finland as it achieved independence from Russia after the October Revolution in Petrograd...
. The declaration actually addresses this problem:

The Government will approach foreign powers to seek the recognition of our political independence. All the complications, famine and unemployment ensuing from the present external isolation make it urgent for the Government to tie direct contacts with foreign powers without delay. Urgent, concrete assistance in the form of necessities for living and industry is our only rescue from imminent famine and industrial standstill. 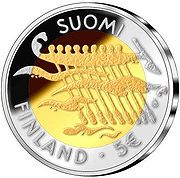