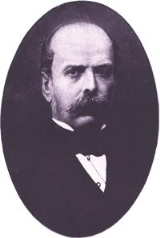 Overview
Filippo Pacini was an Italian
Italy
Italy , officially the Italian Republic languages]] under the European Charter for Regional or Minority Languages. In each of these, Italy's official name is as follows:;;;;;;;;), is a unitary parliamentary republic in South-Central Europe. To the north it borders France, Switzerland, Austria and...
anatomist, posthumously famous for isolating the cholera
Cholera
Cholera is an infection of the small intestine that is caused by the bacterium Vibrio cholerae. The main symptoms are profuse watery diarrhea and vomiting. Transmission occurs primarily by drinking or eating water or food that has been contaminated by the diarrhea of an infected person or the feces...
bacillus Vibrio cholerae
Vibrio cholerae
Vibrio cholerae is a Gram-negative, comma-shaped bacterium. Some strains of V. cholerae cause the disease cholera. V. cholerae is facultatively anaerobic and has a flagella at one cell pole. V...
in 1854, well before Robert Koch
Robert Koch
Heinrich Hermann Robert Koch was a German physician. He became famous for isolating Bacillus anthracis , the Tuberculosis bacillus and the Vibrio cholerae and for his development of Koch's postulates....
's more widely accepted discoveries thirty years later.

Pacini was born in Pistoia
Pistoia
Pistoia is a city and comune in the Tuscany region of Italy, the capital of a province of the same name, located about 30 km west and north of Florence and is crossed by the Ombrone Pistoiese, a tributary of the River Arno.-History:...
, Tuscany
Tuscany
Tuscany is a region in Italy. It has an area of about 23,000 square kilometres and a population of about 3.75 million inhabitants. The regional capital is Florence ....
to a humble family, but was given a religious education in hopes that he would become a bishop. However, in 1830 he was given a scholarship to the most venerable medical school in Pistoia.

Lana here is doing a presentation about Senhore Pacini and she was wondering whether one could explain the significance of his findings briefly Muc...
More
x