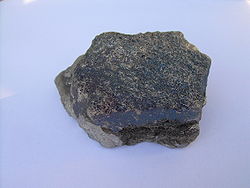 Ferrochrome is an alloy of chromium
Chromium
Chromium is a chemical element which has the symbol Cr and atomic number 24. It is the first element in Group 6. It is a steely-gray, lustrous, hard metal that takes a high polish and has a high melting point. It is also odorless, tasteless, and malleable...
and iron
Iron
Iron is a chemical element with the symbol Fe and atomic number 26. It is a metal in the first transition series. It is the most common element forming the planet Earth as a whole, forming much of Earth's outer and inner core. It is the fourth most common element in the Earth's crust...
containing between 50% and 70% chromium.
The ferrochrome is produced by electric arc melting of chromite
Chromite
Chromite is an iron chromium oxide: FeCr2O4. It is an oxide mineral belonging to the spinel group. Magnesium can substitute for iron in variable amounts as it forms a solid solution with magnesiochromite ; substitution of aluminium occurs leading to hercynite .-Occurrence:Chromite is found in...
, an iron magnesium chromium oxide and the most important chromium ore. Most of the world's ferrochrome is produced in South Africa
South Africa
The Republic of South Africa is a country in southern Africa. Located at the southern tip of Africa, it is divided into nine provinces, with of coastline on the Atlantic and Indian oceans...
, Kazakhstan
Kazakhstan
Kazakhstan , officially the Republic of Kazakhstan, is a transcontinental country in Central Asia and Eastern Europe. Ranked as the ninth largest country in the world, it is also the world's largest landlocked country; its territory of is greater than Western Europe...
and India
India
India , officially the Republic of India , is a country in South Asia. It is the seventh-largest country by geographical area, the second-most populous country with over 1.2 billion people, and the most populous democracy in the world...
, which have large domestic chromite resources. Increasing amounts are coming from Russia and China. The production of steel is the largest consumer of ferrochrome, especially the production of stainless steel
Stainless steel
In metallurgy, stainless steel, also known as inox steel or inox from French "inoxydable", is defined as a steel alloy with a minimum of 10.5 or 11% chromium content by mass....
with chromium content of 10 to 20% is the main application of ferrochrome.

Stainless steel depends on chromium for its appearance and its resistance to corrosion. The average chrome content in stainless steel is approximately 18%. It is also used when it is desired to add chromium to carbon steel. FeCr from Southern Africa, known as 'charge chrome' and produced from a Cr containing ore with a low chrome content, is most commonly used in stainless steel production. Alternatively, high carbon FeCr produced from high grade ore found in Kazakhstan (among other places) is more commonly used in specialist applications such as engineering steels where a high Cr to Fe ratio and minimum levels of other elements such as sulfur
Sulfur
Sulfur or sulphur is the chemical element with atomic number 16. In the periodic table it is represented by the symbol S. It is an abundant, multivalent non-metal. Under normal conditions, sulfur atoms form cyclic octatomic molecules with chemical formula S8. Elemental sulfur is a bright yellow...
, phosphorus
Phosphorus
Phosphorus is the chemical element that has the symbol P and atomic number 15. A multivalent nonmetal of the nitrogen group, phosphorus as a mineral is almost always present in its maximally oxidized state, as inorganic phosphate rocks...
and titanium
Titanium
Titanium is a chemical element with the symbol Ti and atomic number 22. It has a low density and is a strong, lustrous, corrosion-resistant transition metal with a silver color....
are important and production of finished metals takes place in small electric arc furnaces compared to large scale blast furnaces.

Ferrochrome production is essentially a carbothermic reduction
Carbothermic reaction
Carbothermic reactions use carbon as reducing agent, usually for metal oxides. These chemical reactions are usually conducted at several hundreds of degree Celsius. Such processes are applied for production of the elemental forms of many elements. Carbothermic reactions are not however useful for...
operation taking place at high temperatures. Cr Ore (an oxide of chromium and iron) is reduced by coal and coke to form the iron-chromium alloy. The heat for this reaction can come from several forms, but typically from the electric arc
Electric arc
An electric arc is an electrical breakdown of a gas which produces an ongoing plasma discharge, resulting from a current flowing through normally nonconductive media such as air. A synonym is arc discharge. An arc discharge is characterized by a lower voltage than a glow discharge, and relies on...
formed between the tips of the electrodes in the bottom of the furnace and the furnace hearth. This arc creates temperatures of about 2800 °C (5,072 °F). In the process of smelting, huge amounts of electricity are consumed making production in countries with high power charges very costly.

Tapping of the material from the furnace takes place intermittently. When enough smelted ferrochrome has accumulated in the hearth of the furnace, the tap hole is drilled open and a stream of molten metal and slag rushes down a trough into a chill or ladle. The ferrochrome solidifies in large casting
Casting
In metalworking, casting involves pouring liquid metal into a mold, which contains a hollow cavity of the desired shape, and then allowing it to cool and solidify. The solidified part is also known as a casting, which is ejected or broken out of the mold to complete the process...
s, which are crushed for sale or further processed.

Ferrochrome is often classified by the amount of carbon and chrome it contains. The vast majority of FeCr produced is charge chrome from Southern Africa. With high carbon being the second largest segment followed by the smaller sectors of low carbon and intermediate carbon material.

Prices of ferrochrome are often quoted in terms of United States cents (¢) per pound (lb) of chrome contained, although producing companies will generally report production and sales in terms of metric tonnes FeCr sold. In order to calculate the value of a metric tonne of FeCr from a price quoted in UScents, the percentage of chrome within the ferrochrome must be known. In a simple example if 1 metric tonne of FeCr with 55% chrome contained is sold for 100¢ US (per lb of Cr contained) then the value would be: 55%(1 metric ton FeCr) = 550 kg Cr = 1212.54 lb Cr (55%). Multiply 1212.54 lb times 100¢/lb = US$1212.54, then round appropriately.