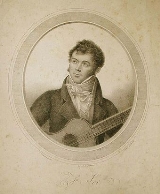 Encyclopedia
Josep Ferran Sorts i Muntades (baptised
Baptism
In Christianity, baptism is for the majority the rite of admission , almost invariably with the use of water, into the Christian Church generally and also membership of a particular church tradition...
14 February 1778 – died 10 July 1839, Paris) was a Spanish classical guitarist
Classical guitar
The classical guitar is a 6-stringed plucked string instrument from the family of instruments called chordophones...
and composer. While he is best known for his guitar compositions, he also composed music for a wide range of genres, including opera, orchestra, string quartet, piano, voice and ballet. His ballet score Cendrillon (Cinderella) received over one hundred performances. Sor’s works for guitar range from pieces for advanced players, such as Variations on a Theme of Mozart, to beginner pieces.

Sor gave concerts throughout Europe, including in England, Paris, Berlin and Warsaw
Warsaw
Warsaw is the capital and largest city of Poland. It is located on the Vistula River, roughly from the Baltic Sea and from the Carpathian Mountains. Its population in 2010 was estimated at 1,716,855 residents with a greater metropolitan area of 2,631,902 residents, making Warsaw the 10th most...
. Before the early 19th century, the guitar was little-known in England. Sor seems to have created a market for himself there and then met the demand. Sor’s contemporaries considered him to be the best guitarist in the world, and his works for guitar have been widely played and reprinted since his death.

Born in Barcelona to a fairly well-off family, Sor was descended from a long line of career soldiers, and intended to continue that legacy, but was distracted from this when his father introduced him to Italian opera. He fell in love with music and abandoned his military career goals. Along with opera, Sor's father also introduced him to the guitar, which, at the time, was little more than an instrument played in taverns, thought to be inferior to orchestral instruments.

At a young age, Sor’s parents were wary of giving his musical abilities too much special attention, because his father was afraid that it would distract from his Latin studies. Therefore, the very young Sor (less than 11 years old) began to write songs to words in Latin to impress his parents. He even invented his own system for notating music, as he had not yet received formal training.

When he reached the age of 11 or 12, the leader of the Barcelona Cathedral took attention to him as a young talent. In a very unfortunate stroke of fate, however, not long after Sor was enrolled in the school his father died, leaving his mother without the funds to continue Sor’s education at the Cathedral. However, at around the same time, the new abbot of Montserrat, Joseph Arredondo, heard of his talent as well, and provided funds for him to attend the “Escolanía” (Choir School) at the famous monastery in Montserrat. Sor reveals in writings, mainly from the last ten years of his life, that he was greatly attached to this place, and had fond, nostalgic memories of his childhood there. Unfortunately, his mother began to see that Sor was becoming greatly distracted from his “chosen” path in the military or administration, and following the advice of friends took him out of the monastery and placed him in military school for four years. It was not a terrible turn of events, as he had much free time to play and compose music in the army as well.

In 1808, when Napoleon Bonaparte invaded Spain, Sor began to write nationalistic music for the guitar, often accompanied by patriotic lyrics. Sor was even part of traveling military bands that would play protest music on the streets. He was also promoted to captain in Córdoba and may have fought battles against the French at this time. After the defeat of the Spanish army, however, Sor accepted an administrative post in the occupying government. Here he was to be officially labeled an afrancesado
Afrancesado
Afrancesado was the term used to denote Spanish and Portuguese partisans of Enlightenment ideas, Liberalism, or the French Revolution, who were supporters of the French occupation of Iberia and of the First French Empire.-Origins:...
along with the other Spaniards who abandoned their defense of Spain to embrace the French Revolutionary ideas. After the Spanish repelled the French in 1813, Sor and the other afrancesados left Spain for fear of retribution. He went to Paris, and never returned to his home country again.

Having completely abandoned his family’s ideal of a military or administrative post, Sor could finally give music a serious try in France. He gained renown at first as a virtuosic guitarist and composer for the instrument. When he attempted composing for operas, however, he was rejected by the French as a composer. His Op. 7 was a large and strange piece, strangely notated in three clefs, and no guitarist at the time could play it. Since France was no longer supportive of his music, Sor decided to try his talents elsewhere.

In 1815, he went to London, England, to attempt to build a stronger music career there. Again, he started to gain considerable fame as a guitarist, and even gave guitar and voice lessons. Since ballet in London was a more popular genre than opera, Sor decided to try his hand at this new area of music. He began to have considerable success this time, especially with his ballet Cendrillon, the most successful of his works in its own day.

By 1823, once he had acquired a level of fame in London, Sor again wandered away, this time with the ballerina Fèlicitè Hullen to Moscow in her quest to become a prima ballerina. Not much is known about his time in Russia, however, though much has been exaggerated about his romantic and professional life there. After three years in Moscow, he traveled around Europe giving concerts, getting into music circles everywhere he went.

In 1827, due partly to his advancing age, he settled down and decided to live out the rest of his life in Paris. It was during this retirement that he composed the majority of his guitar works. He had to comply with the demands of the public, though, and most guitarists wanted simple, nice-sounding pieces to practice that didn't require any special technical ability. It was in these last ten or so years of his life that his writings reveal his bitterness towards his career for the instrument. For example, Op, 43 is entitled Mes Ennuis (“My Annoyances”), and six of his ballets are dedicated to “whoever wants them.” These and other caustic remarks did not help his sales in the least. The foreword to Op.45 goes even further than sarcasm: “Let’s see if that’s that. Six short and easy pieces in stages which aim to lead to what has generally been agreed are difficulties. Composed and dedicated to the person with the least patience, by Fernando Sor. Opus 45.”

His last work was a mass in honor of his daughter, who died in 1837. Her death sent the already sickly Sor into serious depression, and he died in 1839, of tongue and throat cancer. 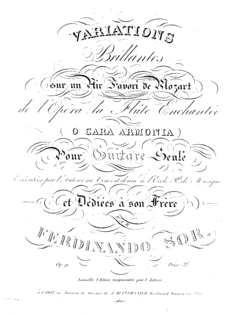 One of Sor's most popular compositions is his "Introduction and Variations on a Theme by Mozart", Op. 9. It is based on a melody "Das klinget so herrlich, das klinget so schön!" from The Magic Flute
The Magic Flute
The Magic Flute is an opera in two acts composed in 1791 by Wolfgang Amadeus Mozart to a German libretto by Emanuel Schikaneder. The work is in the form of a Singspiel, a popular form that included both singing and spoken dialogue....
, which Mozart composed in 1791.

Sor was a prolific and, in his time, quite popular composer—and there was a great demand for him to compose material that was approachable by less accomplished players. The resulting body of instructional studies he produced is not only noteworthy for its value to students of the guitar, but for its inherent musicality. Much of this work is organized in several opuses (in increasing order of difficulty): Opus 60 (25 lessons), Opus 44 (24 lessons), Opus 35 (24 exercises), Opus 31 (24 lessons), Opus 6 (12 studies) and Opus 29 (12 studies).

Sor undoubtably played guitars by Pierre René Lacôte, mentioning: "M. Lacote, a French maker, the only person who, besides his talents, has proved to me that he possesses the quality of not being inflexible to reasoning".
A guitar of Lacote that was signed by Sor is displayed at the Metropolitan Museum of Art
Metropolitan Museum of Art
The Metropolitan Museum of Art is a renowned art museum in New York City. Its permanent collection contains more than two million works, divided into nineteen curatorial departments. The main building, located on the eastern edge of Central Park along Manhattan's Museum Mile, is one of the...
: 1. In his method
Méthode pour la Guitare
The Méthode pour la Guitare is a method for the classical guitar originally written in French by guitarist and composer Fernando Sor.The method was written with the early romantic guitar in mind The Méthode pour la Guitare is a method for the classical guitar originally written in French by...
, Sor mentions: "[...] if I wanted an instrument, I would procure it from M. Joseph Martinez of Malaga, or from M. Lacote [...]
The guitars to which I have always given the preference are those of Alonzo of Madrid, Pagès and Benediz of Cadiz, Joseph and Manuel Martinez of Malaga, or Rada, successor and scholar of the latter, and those of M. Lacote of Paris. I do not say that others do not exist; but never having tried them, I cannot decide on that which I have no knowledge." In his method, he also mentions that "J. Panormo" of London and "Mr. Schroeder of Petersburgh", made some guitars under his direction; but it is curious that he mentions them only in regard to his own guitar design ideas, which are today partly critically viewed. Guitars made according to Sor's design have not yet been located.