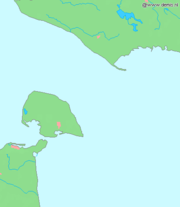 Fehmarn Belt is a strait
Strait
A strait or straits is a narrow, typically navigable channel of water that connects two larger, navigable bodies of water. It most commonly refers to a channel of water that lies between two land masses, but it may also refer to a navigable channel through a body of water that is otherwise not...
connecting the Bay of Kiel
Bay of Kiel
The Bay of Kiel is a bay in the southwestern Baltic Sea, off the shores of Schleswig-Holstein in Germany and the islands of Denmark. It is connected with the Bay of Mecklenburg in the east, the Little Belt in the northwest, and the Great Belt in the North....
and the Bay of Mecklenburg
Bay of Mecklenburg
The Bay of Mecklenburg , also known as the Mecklenburg Bay or Mecklenburg Bight, is a long narrow basin making up the southwestern finger-like arm of the Baltic Sea, between the shores of Germany to the south and the Danish islands of Lolland, Falster, and Møn to the north, the shores of Jutland to...
in the western part of the Baltic Sea
Baltic Sea
The Baltic Sea is a brackish mediterranean sea located in Northern Europe, from 53°N to 66°N latitude and from 20°E to 26°E longitude. It is bounded by the Scandinavian Peninsula, the mainland of Europe, and the Danish islands. It drains into the Kattegat by way of the Øresund, the Great Belt and...
between the German
Germany
Germany , officially the Federal Republic of Germany , is a federal parliamentary republic in Europe. The country consists of 16 states while the capital and largest city is Berlin. Germany covers an area of 357,021 km2 and has a largely temperate seasonal climate...
island of Fehmarn
Fehmarn
Fehmarn is an island and - since 2003 - a town on this island in the Baltic Sea, off the eastern coast of Schleswig-Holstein, Germany, and ca. 18 kilometers south of the Danish island of Lolland...
and the Danish
Denmark
Denmark is a Scandinavian country in Northern Europe. The countries of Denmark and Greenland, as well as the Faroe Islands, constitute the Kingdom of Denmark . It is the southernmost of the Nordic countries, southwest of Sweden and south of Norway, and bordered to the south by Germany. Denmark...
island of Lolland
Lolland
Lolland is the fourth largest island of Denmark, with an area of 1,243 square kilometers . Located in the Baltic sea, it is part of Region Sjælland...
. Ferries
Ferry
A ferry is a form of transportation, usually a boat, but sometimes a ship, used to carry primarily passengers, and sometimes vehicles and cargo as well, across a body of water. Most ferries operate on regular, frequent, return services...
operated by Scandlines
Scandlines
Scandlines is a major German-Danish ferry operator.It consists of a parent company, Scandlines AG, and under this parent company a German subsidiary named Scandlines Deutschland GmbH and a Danish subsidiary named Scandlines Danmark A/S...
connect Puttgarden
Puttgarden
Puttgarden is a ferry harbour and a village on the German island of Fehmarn. It lies on an important route between Germany and Denmark known as the Vogelfluglinie which crosses the 18 km strait, the Fehmarnbelt, to Rødby on the island of Lolland....
and Rødby
Rødby
Rødby is a town and a former municipality on the island of Lolland in Denmark. The former Rødby municipality covered an area of 120 km², and had a total population of 6,590...
on the two islands.

The strait features a 18-kilometre (10 nmi) wide area with depths of 20–30 metres. Currents in the strait are weak and mostly dependent on wind.

The Danish and German governments agreed on 29 June 2007 to build a fixed link to replace the ferry route. It is to save 1 hour on crossing the strait, and provide more crossing capacity.

In 2011, the Danish parliament voted overwhelmingly (with 7 of 8 parties supporting) for the €5.1 billion project that is intended to open in 2020. The tunnel is to have three separate drives, two containing two motorway lanes each, and one with a double-track railway line.
The source of this article is wikipedia, the free encyclopedia.  The text of this article is licensed under the GFDL.