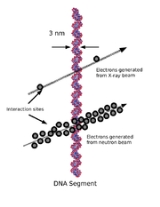 Encyclopedia
Fast neutron therapy utilizes high energy neutron
Neutron
The neutron is a subatomic hadron particle which has the symbol or , no net electric charge and a mass slightly larger than that of a proton. With the exception of hydrogen, nuclei of atoms consist of protons and neutrons, which are therefore collectively referred to as nucleons. The number of...
s typically greater than 20 MeV
MEV
MeV and meV are multiples and submultiples of the electron volt unit referring to 1,000,000 eV and 0.001 eV, respectively.Mev or MEV may refer to:In entertainment:* Musica Elettronica Viva, an Italian musical group...
to treat cancer
Cancer
Cancer , known medically as a malignant neoplasm, is a large group of different diseases, all involving unregulated cell growth. In cancer, cells divide and grow uncontrollably, forming malignant tumors, and invade nearby parts of the body. The cancer may also spread to more distant parts of the...
. Most fast neutron therapy beams are produced from proton beam
Proton beam
Proton beams, a type of ion beams, are the result of proton particle acceleration by means of a cyclotron or a synchrotron and can be used e.g. in Proton Beam Therapy for cancer treatment or for proton beam writing in lithography....
s impinging upon beryllium
Beryllium
Beryllium is the chemical element with the symbol Be and atomic number 4. It is a divalent element which occurs naturally only in combination with other elements in minerals. Notable gemstones which contain beryllium include beryl and chrysoberyl...
targets.

Radiation therapy
Radiation therapy
Radiation therapy , radiation oncology, or radiotherapy , sometimes abbreviated to XRT or DXT, is the medical use of ionizing radiation, generally as part of cancer treatment to control malignant cells.Radiation therapy is commonly applied to the cancerous tumor because of its ability to control...
of cancers is based upon the biological response of cells to ionizing radiation. Tumor cells typically lack effective repair mechanisms, so if radiation is delivered in small sessions, a process known as fractionation, normal tissue will have time to repair itself. This repair of normal tissue means that there is a therapeutic ratio between cancer cells and normal cells.

In addition, different types of ionizing radiation will produce different effects upon cells. A comparison of neutrons with X-rays illustrates the differences. X-rays, also called photons and gamma-rays, are the most common form of radiation used to treat cancer. Both neutrons and X-rays are uncharged; for this reason they are referred to as indirectly ionizing radiation. The biological effect of neutrons or X-rays is due almost completely to the secondary electrons
Secondary electrons
Secondary electrons are electrons generated as ionization products. They are called 'secondary' because they are generated by other radiation . This radiation can be in the form of ions, electrons, or photons with sufficiently high energy, i.e. exceeding the ionization potential...
that they produce when they interact with a patient's tissue. 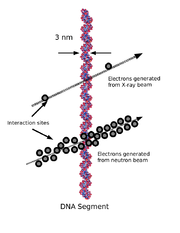 When therapeutic energy X-rays (1 to 25 MeV) interact with cells in human tissue, they do so mainly by Compton interactions
Compton scattering
In physics, Compton scattering is a type of scattering that X-rays and gamma rays undergo in matter. The inelastic scattering of photons in matter results in a decrease in energy of an X-ray or gamma ray photon, called the Compton effect...
, and produce relatively high energy secondary electrons. These high energy electrons deposit their energy at about 1 KeV/µm. By comparison, the charged particles produced at a site of a neutron interaction may deliver their energy at a rate of 30-80 KeV/µm. The amount of energy deposited as the particles traverse a section of tissue is referred to as the Linear Energy Transfer
Linear energy transfer
Linear energy transfer is a measure of the energy transferred to material as an ionizing particle travels through it. Typically, this measure is used to quantify the effects of ionizing radiation on biological specimens or electronic devices....
(LET). X-rays produce low LET radiation, and neutrons produce high LET radiation.

Because the electrons produced from X-rays have high energy and low LET, when they interact with a cell typically only a few ionizations will occur. It is likely then that the low LET radiation will cause only single strand breaks of the DNA helix. Single strand breaks of DNA molecules can be readily repaired, and so the effect on the target cell is not necessarily lethal. By contrast, the high LET charged particles produced from neutron irradiation cause many ionizations as they traverse a cell, and so double-strand breaks of the DNA molecule are possible. DNA repair
DNA repair
DNA repair refers to a collection of processes by which a cell identifies and corrects damage to the DNA molecules that encode its genome. In human cells, both normal metabolic activities and environmental factors such as UV light and radiation can cause DNA damage, resulting in as many as 1...
of double-strand breaks are much more difficult for a cell to repair, and more likely to lead to cell death.

DNA repair mechanisms are quite efficient, and during a cell's lifetime many thousands of single strand DNA breaks will be repaired. A sufficient dose of ionizing radiation, however, delivers so many DNA breaks that it overwhelms the capability of the cellular mechanisms to cope.

Because of the high LET, the relative radiation damage (relative biological effect or RBE) of fast neutrons is 4 times that of X-rays,

meaning 1 rad of fast neutrons is equal to 4 rads of X-rays. The RBE of neutrons is also energy dependent, so neutron beams produced with different energy spectra at different facilities will have different RBE values.

The presence of oxygen
Oxygen
Oxygen is the element with atomic number 8 and represented by the symbol O. Its name derives from the Greek roots ὀξύς and -γενής , because at the time of naming, it was mistakenly thought that all acids required oxygen in their composition...
in a cell acts as a radiosensitizer
Radiosensitizer
A radiosensitizer is a drug that makes tumor cells more sensitive to radiation therapy.One of the major limitations of radiotherapy is that the cells of solid tumors become deficient in oxygen. Solid tumors can outgrow their blood supply, causing a low-oxygen state known as hypoxia...
, making the effects of the radiation more damaging. Tumor cells typically have a lower oxygen content than normal tissue. This medical condition is known as tumor hypoxia
Tumor hypoxia
Tumor hypoxia is the situation where tumor cells have been deprived of oxygen. As a tumor grows, it rapidly outgrows its blood supply, leaving portions of the tumor with regions where the oxygen concentration is significantly lower than in healthy tissues...
and therefore the oxygen effect acts to decrease the sensitivity of tumor tissue. Generally it is believed that neutron irradiation overcomes the effect of tumor hypoxia, although there are counterarguments

The efficacy of neutron beams for use on prostate cancer has been shown through randomized trials. Fast neutron therapy has been applied successfully against salivary gland tumors. See also the NCI Salivary Cancer Page.
Adenoid Cystic Carcinomas have also been treated.
Various other head and neck tumors have been examined.

Several centers around the world have used fast neutrons for treating cancer. Due to lack of funding and support, at present only three are active in the USA.
The University of Washington and the Gershenson Radiation Oncology Center operate fast neutron therapy beams and both are equipped with a Multi-Leaf Collimator (MLC) to shape the neutron beam.

The Radiation Oncology Department operates a proton cyclotron
Cyclotron
In technology, a cyclotron is a type of particle accelerator. In physics, the cyclotron frequency or gyrofrequency is the frequency of a charged particle moving perpendicularly to the direction of a uniform magnetic field, i.e. a magnetic field of constant magnitude and direction...
that produces fast neutrons from directing 50.5MeV protons onto a beryllium target.
The UW Cyclotron is equipped with a gantry mounted delivery system an MLC to produce shaped fields. The UW Neutron system is referred to as the Clinical Neutron Therapy System (CNTS).

The CNTS is typical of most neutron therapy systems. A large, well shielded building is required to cut down on radiation exposure to the general public and to house the necessary equipment.

A beamline transports the proton beam from the cyclotron to a gantry system. The gantry system contains magnets for deflecting and focusing the proton beam onto the beryllium target. The end of the gantry system is referred to as the head, and contains dosimetry
Dosimetry
Radiation dosimetry is the measurement and calculation of the absorbed dose in matter and tissue resulting from the exposure to indirect and direct ionizing radiation...
systems to measure the dose, along with the MLC and other beam shaping devices. The advantage of having a beam transport and gantry are that the cyclotron can remain stationary, and the radiation source can be rotated around the patient. Along with varying the orientation of the treatment couch which the patient is positioned on, variation of the gantry position allows radiation to be directed from virtually any angle, allowing sparing of normal tissue and maximum radiation dose to the tumor.

During treatment, only the patient remains inside the treatment room (called a vault) and the therapists will remotely control the treatment, viewing the patient via video cameras. Each delivery of a set neutron beam geometry is referred to as a treatment field or beam. The treatment delivery is planned to deliver the radiation as effectively as possible, and usually results in fields that conform to the shape of the gross target, with any extension to cover microscopic disease.

The neutron therapy facility at the Gershenson Radiation Oncology Center at Karmanos Cancer Center/Wayne State University (KCC/WSU) in Detroit bears some similarities to the CNTS at the University of Washington, but also has many unique characteristics.
While the CNTS accelerates protons, the KCC facility produces its neutron beam by accelerating 48.5 MeV deuterons onto a beryllium target. This method produces a neutron beam with depth dose characteristics roughly similar to those of a 4MV photon beam. The deuterons are accelerated using a gantry mounted superconducting cyclotron (GMSCC), eliminating the need for extra beam steering magnets and allowing the neutron source to rotate a full 360° around the patient couch.

The KCC facility is also equipped with an MLC beam shaping device, the only other neutron therapy center in the USA besides the CNTS. The MLC at the KCC facility has been supplemented with treatment planning software that allows for the implementation of Intensity Modulated Neutron Radiotherapy (IMNRT), a recent advance in neutron beam therapy which allows for more radiation dose to the targeted tumor site than 3-D neutron therapy.

KCC/WSU has more experience than anyone in the world using neutron therapy for prostate cancer, having treated nearly 1,000 patients during the past 10 years.

The Fermilab neutron therapy center first treated patients in 1976, and since that time has treated over 3,000 patients. In 2004, it was revived after becoming managed by Northern Illinois University.