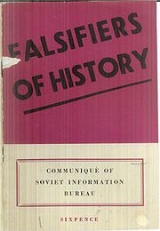 Encyclopedia
Falsifiers of History ("Falsifiers") is a book published by the Soviet Information Bureau
Soviet Information Bureau
Soviet Information Bureau , commonly known as Sovinformburo ) was a leading Soviet news agency in 1941 - 1961. It was established on June 24, 1941, shortly after the opening of the Eastern Front of World War II by a directive of Sovnarkom and the Central Committee of the Communist Party of the...
, edited and partially re-written by Joseph Stalin
Joseph Stalin
Joseph Vissarionovich Stalin was the Premier of the Soviet Union from 6 May 1941 to 5 March 1953. He was among the Bolshevik revolutionaries who brought about the October Revolution and had held the position of first General Secretary of the Communist Party of the Soviet Union's Central Committee...
, in response to documents made public in January 1948 regarding German–Soviet relations before and after the Molotov–Ribbentrop Pact.

In 1948, the U.S. State Department
United States Department of State
The United States Department of State , is the United States federal executive department responsible for international relations of the United States, equivalent to the foreign ministries of other countries...
published a collection of documents titled Nazi–Soviet Relations, 1939–1941: Documents from the Archives of The German Foreign Office, which contained documents recovered from the Foreign Office of Nazi Germany
Nazi Germany
Nazi Germany , also known as the Third Reich , but officially called German Reich from 1933 to 1943 and Greater German Reich from 26 June 1943 onward, is the name commonly used to refer to the state of Germany from 1933 to 1945, when it was a totalitarian dictatorship ruled by...
. The collection included documents from, and about conversations with, Soviet
Soviet Union
The Soviet Union , officially the Union of Soviet Socialist Republics , was a constitutionally socialist state that existed in Eurasia between 1922 and 1991....
officials during negotiations regarding the Molotov–Ribbentrop Pact
Molotov–Ribbentrop Pact negotiations
The Molotov–Ribbentrop Pact was an August 23, 1939 agreement between the Soviet Union and Nazi Germany colloquially named after Soviet foreign minister Vyacheslav Molotov and German foreign minister Joachim von Ribbentrop. The treaty renounced warfare between the two countries...
, a 1939 agreement between the Soviet Union and Germany, along with the related 1939 German–Soviet Commercial Agreement. It also included publication of the "Secret Additional Protocol" of that Pact, which divided eastern Europe into "spheres of influence" between Germany and the Soviet Union, executed weeks before each country's subsequent invasion of Poland. The collection further contained "Secret Supplementary Protocols" to agreements between the countries, discussions regarding the 1940 German–Soviet Commercial Agreement
German–Soviet Commercial Agreement (1940)
The 1940 German-Soviet Commercial Agreement was an economic arrangement between the Soviet Union and Nazi Germany signed on February 11, 1940 by which the Soviet Union agreed in period from February 11, 1940 to February 11, 1941, in addition to the deliveries...
, discussions of the Soviet Union potentially becoming an Axis Power
German–Soviet Axis talks
In October and November 1940, German–Soviet Axis talks occurred concerning the Soviet Union's potential entry as a fourth Axis Power. The negotiations included a two day Berlin conference between Soviet Foreign Minister Vyacheslav Molotov, Adolf Hitler and German Foreign Minister Joachim von...
and other German–Soviet negotiations and discussions.

Falsifiers was published in response to the documents made public in Nazi–Soviet Relations. Joseph Stalin
Joseph Stalin
Joseph Vissarionovich Stalin was the Premier of the Soviet Union from 6 May 1941 to 5 March 1953. He was among the Bolshevik revolutionaries who brought about the October Revolution and had held the position of first General Secretary of the Communist Party of the Soviet Union's Central Committee...
became personally involved in editing the work after receiving a translation of the Nazi–Soviet Relations document collection. On February 3, 1948, Stalin was presented with a typescript titled Reply to Slanderers. Stalin changed the title to Falsifiers of History (Historical Reports). Stalin personally edited the book, including striking and re-writing whole sections by handwritten modification.

Falsifiers originally appeared as a series of articles in Pravda
Pravda
Pravda was a leading newspaper of the Soviet Union and an official organ of the Central Committee of the Communist Party between 1912 and 1991....
in February 1948. It was subsequently published in numerous languages and distributed worldwide. Separately, the Soviet Union later published a collection of documents it captured from German archives titled Documents and Materials Relating to the Eve of the Second World War.

Falsifiers pointedly ignored Soviet relations with Germany, making no attempt to directly counter or deal with the documents published in Nazi–Soviet Relations. Rather, the main theme of the booklet is Western culpability for the outbreak of war in 1939. It argues that "Western powers" aided Nazi rearmament and aggression, including that American bankers and industrialists provided capital for the growth of German war industries, while deliberately encouraging Hitler to expand eastward. It depicted the Soviet Union as striving to negotiate a collective security against Hitler, while being thwarted by double-dealing Anglo–French appeasers who, despite appearances, had no intention of a Soviet alliance and were secretly negotiating with Berlin.

Falsifiers casts the Munich agreement
Munich Agreement
The Munich Pact was an agreement permitting the Nazi German annexation of Czechoslovakia's Sudetenland. The Sudetenland were areas along Czech borders, mainly inhabited by ethnic Germans. The agreement was negotiated at a conference held in Munich, Germany, among the major powers of Europe without...
, not just as Anglo–French short-sightedness or cowardice, but as a "secret" agreement that was a "a highly important phase in their policy aimed at goading the Hitlerite aggressors against the Soviet Union." Falsifiers also included the claim that, during the Pact's operation, Stalin rejected Hitler's offer to divide the world, without mentioning the Soviet counteroffer to Germany's offer to the Soviets to join the Axis
German–Soviet Axis talks
In October and November 1940, German–Soviet Axis talks occurred concerning the Soviet Union's potential entry as a fourth Axis Power. The negotiations included a two day Berlin conference between Soviet Foreign Minister Vyacheslav Molotov, Adolf Hitler and German Foreign Minister Joachim von...
. The parties never reached agreement on Axis entry. Stalin's account in Falsifiers was repeated in Soviet historical texts until the Soviet Union's dissolution
Dissolution of the Soviet Union
The dissolution of the Soviet Union was the disintegration of the federal political structures and central government of the Union of Soviet Socialist Republics , resulting in the independence of all fifteen republics of the Soviet Union between March 11, 1990 and December 25, 1991...
. Regarding Soviet–German relations after the Molotov–Ribbentrop Pact, Falsifiers main theme frames Soviet actions as a legitimate attempt to build up an "Eastern front" to defend against inevitable Nazi aggression.

Falisifiers characterization of Western policy as anti-Communist, anti-Soviet, and pro-Nazi had been a prominent theme of Soviet propaganda before the Second World War, and such rhetoric more vigorously reemerged during the Cold War.

Soviet publications before the revelation of documents in Nazi–Soviet Relations had avoided discussing the Soviet–German pact. Accordingly, Falsifiers is novel because it is a first frank Soviet discussion of the German–Soviet pact in a publication. In addition, because Falsifiers was personally and extensively edited by Stalin, at the very least, it provides unique insight into the view of events that he was keen to publicize.

The book provides insight into Stalin's thinking and calculations in the autumn of 1940. In analyzing the text of Falsifiers surrounding Soviet–German talks regarding the potential entry as the Soviet Union as an Axis Power, historian Geoffrey Roberts argues that there is no reason that Stalin would not have signed a four-power pact if Germany accepted his November offer.

Some accusations made by Stalin in this book are however today supported by western historians, in particular the role played by France and England in the failure of a tripartite alliance with USSR before 1940.

The arrangement of chapters and section titles is as follows:

Documents Captured in Germany
A Distorted Picture of Events


Chapter 1: How Preparation for German Aggression Was Commenced


Chapter 2: Not a Struggle Against German Aggression, But A Policy Of Isolating the U.S.S.R.


Chapter 3: Isolation of the Soviet Union: The Soviet–German Non-Aggression Pact

Negotiations Between Britain and France And The Soviet Union
A Position of Inequality For The USSR
No Obligations Whatever Towards the USSR
The Soviet Proposal
Spurring Hitler To Attack the U.S.S.R
Military Negotiation Also Futile
Britain's Back-Stage Negotiation With Germany
Surrender of Poland To Hitler
U.S.S.R.'s Non-Aggression Pact With Germany
The Best Possible Course


Chapter 4: Creation of the "Eastern Front". Germany's Attack on the U.S.S.R., The Anti-Hitler Coalition And The Question of Inter-Allied Obligations

Creation Of The Eastern Front
Finnish Government Declines Soviet Union's Friendly Proposal
Safeguarding Security of Leningrad, Murmansk
Britain and France Supply Finland With Arms
A Plan For Military Operations Against the U.S.S.R.
A Turn In the Development Of The War
Fiasco of Policy of Appeasement
Germany Attacks the U.S.S.R.
The Anti-Hitler Coalition
What Actually Happened in Berlin!
Sounding The Position Of The Hitler Government
Negotiations Between U.S.A. and Germany in 1943
Postponing the Opening of the Second Front
U.S.S.R.'s Assistance To Its Ally
J. V. Stalin's Message to Winston Churchill On Preparation of Offensive
A Blow of Unparalleled Force