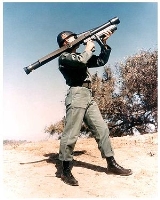 Encyclopedia
The General Dynamics
General Dynamics
General Dynamics Corporation is a U.S. defense conglomerate formed by mergers and divestitures, and as of 2008 it is the fifth largest defense contractor in the world. Its headquarters are in West Falls Church , unincorporated Fairfax County, Virginia, in the Falls Church area.The company has...
FIM-43 Redeye was a man-portable surface-to-air missile
Surface-to-air missile
A surface-to-air missile or ground-to-air missile is a missile designed to be launched from the ground to destroy aircraft or other missiles...
system. It used infrared homing to track its target. Production was terminated in September 1969 after about 85,000 rounds had been built - in anticipation of the Redeye II, which later became the FIM-92 Stinger
FIM-92 Stinger
The FIM-92 Stinger is a personal portable infrared homing surface-to-air missile , which can be adapted to fire from ground vehicles and helicopters , developed in the United States and entered into service in 1981. Used by the militaries of the U.S...
. The Redeye was withdrawn gradually between 1982 and 1995 as the Stinger was deployed.

In July 1959 the development project began, in March 1960, the first test rounds were fired. Launches from a launch tube followed in May 1961, with a shoulder launch occurring in 1961. Technical problems prevented the missile entering full production: the missile did not live up to its specifications - being slower, less maneuverable and less accurate. During the testing, substantial use was made of the Atlantic Research MQR-16 Gunrunner
MQR-16 Gunrunner
The MQR-16A Gunrunner was an unguided rocket developed by Atlantic Research during the 1960s. Designed with low cost as a priority, the MQR-16A was intended to act as a target drone for use in the development of man-portable surface-to-air missiles, and as a training target for the missile operators...
expendable target missile.

Limited production began as XM41 Redeye Block I. The missile was designated XMIM-43A in June 1963. Block I systems were then evaluated between 1965 and 1966. 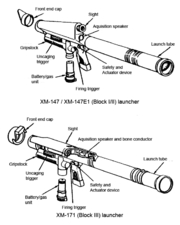 Block II systems designated XM41E1 began development in 1964, the missile being designated XMIM-43B. The missiles were delivered in April 1966, and included a new gas-cooled detector cell, a slightly redesigned launcher and an improved warhead.

In 1965 to 1966 General Dynamics developed the final Redeye Block III configuration, designated at first XM41E2 with XFIM-43C missiles. The missiles retained the seeker from the Block II missile, but included a new rocket motor, warhead and fuze. The launcher now had an XM-62 open sight and upgraded electronics. The new missile could turn at up to 3g. The missile achieved a kill probability against F9F tactical drones travelling at 430 knots at an altitude of 100 meters of 0.51. From this it was calculated that the kill probability versus a Mikoyan-Gurevich MiG-21
Mikoyan-Gurevich MiG-21
The Mikoyan-Gurevich MiG-21 is a supersonic jet fighter aircraft, designed by the Mikoyan-Gurevich Design Bureau in the Soviet Union. It was popularly nicknamed "balalaika", from the aircraft's planform-view resemblance to the Russian stringed musical instrument or ołówek by Polish pilots due to...
at similar altitude would be 0.403, and 0.53 against helicopters (specifically the Mi-6
Mil Mi-6
|-Facts:*Test pilot N.B. Leshin has set the world record of speed. This event was awarded by the American Helicopter Society.*Small numbers are still in service, most in Siberia plus a small number with the People's Republic of China...
and US H-13 and H-21). Kill probability against larger propeller driven aircraft like the AN-12 was estimated at 0.43. Production of the Block III systems began in May 1967. In 1968 Block III was declared operational.

50 Redeye systems were delivered to the Mujahideen by the US during the Soviet war in Afghanistan
Soviet war in Afghanistan
The Soviet war in Afghanistan was a nine-year conflict involving the Soviet Union, supporting the Marxist-Leninist government of the Democratic Republic of Afghanistan against the Afghan Mujahideen and foreign "Arab–Afghan" volunteers...
in 1984, where they were used to shoot down a number of aircraft including several Su-25 jets as well as Mi-24 and Mi-8
Mil Mi-8
The Mil Mi-8 is a medium twin-turbine transport helicopter that can also act as a gunship. The Mi-8 is the world's most-produced helicopter, and is used by over 50 countries. Russia is the largest operator of the Mi-8/Mi-17 helicopter....
helicopters. By November 1985 it had largely been replaced by the dramatically more successful FIM-92 Stinger missiles.

The Redeye was known as Hamlet in Danish
Denmark
Denmark is a Scandinavian country in Northern Europe. The countries of Denmark and Greenland, as well as the Faroe Islands, constitute the Kingdom of Denmark . It is the southernmost of the Nordic countries, southwest of Sweden and south of Norway, and bordered to the south by Germany. Denmark...
service and as RBS 69 in Swedish service.

The missile's seeker is only capable of tracking the hot exhausts of aircraft, which limits the engagements to tail-chase only. The missile's blast fragmentation warhead is triggered by an impact fuze
Fuse (explosives)
In an explosive, pyrotechnic device or military munition, a fuse is the part of the device that initiates function. In common usage, the word fuse is used indiscriminately...
requiring a direct hit. As a first generation missile it is susceptible to a variety of countermeasure
Countermeasure
A countermeasure is a measure or action taken to counter or offset another one. As a general concept it implies precision, and is any technological or tactical solution or system designed to prevent an undesirable outcome in the process...
s including flares
Flare (pyrotechnic)
A flare, also sometimes called a fusee, is a type of pyrotechnic that produces a brilliant light or intense heat without an explosion. Flares are used for signalling, illumination, or defensive countermeasures in civilian and military applications...
and hot brick jammers. In addition, its inability to turn at a rate greater than 3 G means that it can be outmaneuvered if detected.