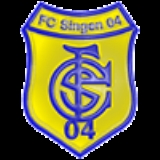 Encyclopedia
The FC Singen 04 is a German association football club
Football in Germany
Association football is the most popular sport in Germany. The German Football Association is the sport's national governing body, with 6.6 million members organized in over 26,000 football clubs. There is a league system, with the 1. and 2. Bundesliga on top, and the winner of the first...
from the city of Singen
Singen
Singen is an industrial city in the very south of Baden-Württemberg in southern Germany and just north of the German-Swiss border.-Location:...
, Baden-Württemberg. Established 4 August 1904. the club merged with Fußball-Club Radolfzell in 1908 to form FC Radolfzell-SIngen. That union was ended on 10 March 1910 and in 1917 04 was joined by Sportclub Singen.

FCS 04 won its first title in 1923, taking the championship in the Bezirksliga Ost, and in 1930 it won the Schwarzwaldliga, but could not find its way to the highest level of play in the Bezirksliga Württemberg-Baden
Bezirksliga Württemberg-Baden
The Bezirksliga Württemberg-Baden was the highest association football league in the German states of Württemberg and Baden and the Prussian Province of Hohenzollern from 1923 to 1933. The league was disbanded with the rise of the Nazis to power in 1933....
. In 1933 German football was reorganized under the Third Reich into 16 top flight Gauligen and in 1939 FSC attempted to qualify for the Gauliga Baden
Gauliga Baden
The Gauliga Baden was the highest football league in the German state of Baden from 1933 to 1945. Shortly after the formation of the league, the Nazis reorganised the administrative regions in Germany, and the Gau Baden replaced the state Baden....
but were beaten by VfR Achern
VfR Achern
VfR Achern is a German football club from the city of Achern, Baden-Württemberg near the Hornisgrinde mountain. The club was established on 17 October 1907 as Fußball-Club Achern and adopted the name Verein für Rasenspiele Achern in 1910.-History:...
(2:3, 5:3). The team also took part for the first time in national cup play in the Tschammerpokal tournament predecessor to today's DFB-Pokal
DFB-Pokal
The DFB-Pokal or DFB Cup is a German knockout football cup competition held annually. 64 teams participate in the competition, including all clubs from the Bundesliga and the 2nd Bundesliga. It is considered the second most important national title in German football after the Bundesliga...
(German Cup). From 1942–45, during World War II, the club played as part of the combined wartime side Kreigspielgemeinschaft Singen/Gottmadingen alongside SpVgg Gottmadingen and Reichsbahn SV Singen.

Following the war occupying Allied authorities
Allied Occupation Zones in Germany
The Allied powers who defeated Nazi Germany in World War II divided the country west of the Oder-Neisse line into four occupation zones for administrative purposes during 1945–49. In the closing weeks of fighting in Europe, US forces had pushed beyond the previously agreed boundaries for the...
ordered the dissolution of most organizations in Germany, including sports and football clubs. New clubs soon emerged and FCS was reorganized as Sportverein Singen. In May 1946, the former memberships of several other Singen clubs, including Stadtturnverein Singen, Freie Turnerschaft Singen, and Roter Sport Singen, joined SV to play as Sportgemeinde Eintracht Singen. Both TSS and RSS were former worker's clubs that were banned by the regime in 1933 as politically undesirable.

Eintracht became part of the Oberliga Südbaden-Ost (I) for the 1945–46 season and the following year played in the Landesliga Südbaden-Ost. These circuits were not part of general German domestic competition, but were instead administered as part of a separate competition organized within the French zone of occupation. In 1947, the team returned to top flight competition in the French-controlled Oberliga Südwest-Süd and in 1948 captured the South Baden Cup
South Baden Cup
The South Baden Cup is one of the 21 regional cup competitions of German football. The winner of the competition gains entry to the first round of the German Cup.-History:...
. The following year the team reassumed its traditional identity as FCS 04.

A second place in this league in 1997 meant promotion to the Oberliga and for three seasons, the club belonged to this league, a ninth place in its first season being the highlight. In the 1999–2000 edition of the German Cup, Singen managed to beat 2nd Bundesliga side Rot-Weiß Oberhausen
Rot-Weiß Oberhausen
Rot-Weiß Oberhausen is a German association football club in Oberhausen, North Rhine-Westphalia. The club was formed as Oberhausener SV in December 1904 out of the merger of Emschertaler SV and the football enthusiasts of Oberhausener TV 1873...
3–2 in the first round before going out 1–3 to SpVgg Greuther Fürth
SpVgg Greuther Fürth
SpVgg Greuther Fürth is a German association football club based in Fürth, Bavaria. The club was formed when the senior football side of newcomer Turn- und Sportverein Vestenbergsgreuth joined traditional club Spielvereinigung Fürth on 1 July 1996...
in the second round.

From there, FCS 04 descended again and, after relegation from the Oberliga, went straight through to the Landesliga (VI) in 2001. Briefly returning to the Verbandsliga in 2002–03, the club since has been playing at Landesliga level.

The club, with Singen being close to the Swiss
Switzerland
Switzerland name of one of the Swiss cantons. ; ; ; or ), in its full name the Swiss Confederation , is a federal republic consisting of 26 cantons, with Bern as the seat of the federal authorities. The country is situated in Western Europe,Or Central Europe depending on the definition....
border, enjoys close relations with its neighbouring country. In August 2008, it played a friendly against FC Aarau
FC Aarau
FC Aarau is a Swiss football club, based in Aarau. They play in the Swiss Challenge League.-History:FC Aarau was formed on 26 May 1902 by workers from a local brewery. The early days of the club were a success and they won the Swiss championship in 1911/12 and then again in 1913/14...
, then leader of the Swiss Super League
Swiss Super League
The Swiss Super League or Axpo Super League is the top tier of the Swiss Football League. The Swiss Super League is currently ranked 16th according to UEFA's ranking of league coefficients, which is based upon Swiss team performances in European competitions.-Names:-Participating clubs:The teams...
.

On league level, it continued to play in the now tier-seven Landesliga Südbaden Staffel 3 in 2008–09, where team took out the championship and earned promotion. Since then, the club has been playing in the Verbandsliga.

The club's fans have a long standing friendship with the fans of FC Rastatt 04
FC Rastatt 04
FC Rastatt is a German association football club from the city of Rastatt, Baden-Württemberg. It was established as Fußball-Klub Rastatt on 9 October 1904 at the Gasthaus zur Linde. A 1919 union with Fußball-Club Phoenix created Rastatt Fußballverein 04, which merged with Frankonia 1912 Rastatt on...
, another club from the south of Baden.