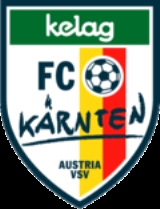 Encyclopedia
FC Kärnten was an Austrian association football
Football in Austria
Football is a popular sport in Austria, second only to alpine skiing. The Austrian Football Association, the ÖFB , was founded in 1904 and has been a member of FIFA since then.-League system:...
club based in Klagenfurt
Klagenfurt
-Name:Carinthia's eminent linguists Primus Lessiak and Eberhard Kranzmayer assumed that the city's name, which literally translates as "ford of lament" or "ford of complaints", had something to do with the superstitious thought that fateful fairies or demons tend to live around treacherous waters...
, Carinthia
Carinthia (state)
Carinthia is the southernmost Austrian state or Land. Situated within the Eastern Alps it is chiefly noted for its mountains and lakes.The main language is German. Its regional dialects belong to the Southern Austro-Bavarian group...
. It was founded in 1920 under the name of KSK Klagenfurt. They last played home games at the Sportzentrum Fischl
Sportzentrum Fischl
The Sportzentrum Fischl is a soccer stadium in Klagenfurt.It has a capacity of 3,000 people.Currently the Red-Zac team FC Kärnten plays its home games in the stadium....
.

Though Austria Klagenfurt again gained the promotion to the Regional League Central in 1996, it seemed that the Carinthian Clubs would have to work together in order to send a team to the Bundesliga. This led to cooperation between SK Austria and Villacher SV, who also played in the Regional League, and were based in the nearby town of Villach
Villach
Villach is the second largest city in the Carinthia state in the southern Austria, at the Drava River and represents an important traffic junction for Austria and the whole Alpe-Adria region. , the population is 58,480.-History:...
. In 1997, the clubs changed their name to FC Austria/VSV and were promoted to the First League
Austrian Football First League
The Austrian Football First League is the second highest professional division in Austrian football. It contains 10 teams and is run in the same fashion as the Austrian Bundesliga...
. In 1999, the clubs formally merged under the name FC Kärnten.

After the hiring of manager Walter Schachner
Walter Schachner
Walter "Schoko" Schachner is a football manager and former Austrian national player .As he always brought chocolate to the games when he was a boy, he got the nickname schoko...
in 2001, the team won the Austrian Cup
Austrian Cup
The Austrian Cup, in German: ÖFB-Cup is an annual football competition held by the Austrian Football Association, the ÖFB.It has been held since 1919, with the exception of the time of the Anschluss between 1939 and 1945 and the period between 1950 and 1958 when the competition was deemed of...
, the Supercup
Austrian Supercup
The Austrian Supercup was a football competition held annually from 1986 until 2004 between the winners of the Austrian Bundesliga and the Austrian Cup.-Winners of Austrian Supercup:*1986: SK Rapid Wien...
and became champions of the First League, resulting in promotion to the Bundesliga the following season. The club, under the honorary presidency of Governor Jörg Haider
Jörg Haider
Jörg Haider was an Austrian politician. He was Governor of Carinthia on two occasions, the long-time leader of the Austrian Freedom Party and later Chairman of the Alliance for the Future of Austria , a breakaway party from the FPÖ.Haider was controversial within Austria and abroad for comments...
, once again reached the finals of the Austrian Cup and the Supercup in 2003, which they both lost to FK Austria Wien
FK Austria Wien
Fußballklub Austria Wien is an Austrian association football club from the capital city of Vienna. They are considered the most successful club in Austria, having won the highest Austrian Bundesliga 23 times, the Austrian Cup 27 times and the Austrian Supercup 6 times. They also reached the UEFA...
. FC Kärnten played in the Bundesliga for three years until relegation in 2004.

Their decline continued, exacerbated by the resignation of Jörg Haider in 2006 and the foundation of rivak club SK Austria Kärnten in June 2007, who assumed the Bundesliga licence of the defunct ASKÖ Pasching
ASKÖ Pasching
FC Superfund Pasching is an Austrian association football club, from Pasching, Upper Austria.-History:After the fusion from ASKÖ Pasching to SK Austria Kärnten, the club was founded on 16 May 2007 as FC Pasching.-Current squad:...
. The team had to cede their stadium, the present-day Hypo-Arena, to Austria Kärnten and retire to the small Fischl ground. At the end of the 2007–08 season, FC Kärnten slipped in to the Regional League, prompting several players to leave the club. In November 2008, the club went into administration, and the club ceased operations on 21 January 2009. The team's tradition is continued by the SV Austria Klagenfurt
SV Austria Klagenfurt
SV Austria Klagenfurt is an Austrian association football club, based in the Carinthian capital Klagenfurt, currently playing in the Austrian Regional League Central.-History:...
football club founded in 2007.