Captain Sir Eyre Massey Shaw KCB
Order of the Bath
The Most Honourable Order of the Bath is a British order of chivalry founded by George I on 18 May 1725. The name derives from the elaborate mediæval ceremony for creating a knight, which involved bathing as one of its elements. The knights so created were known as Knights of the Bath...
(1830–1908) was the Superintendent of the Metropolitan Fire Brigade (now renamed the London Fire Brigade
London Fire Brigade
The London Fire Brigade is the statutory fire and rescue service for London.Founded in 1865, it is the largest of the fire services in the United Kingdom and the fourth-largest in the world with nearly 7,000 staff, including 5,800 operational firefighters based in 112 fire...
), and its predecessor, the London Fire Engine Establishment, from 1861 to 1891. He introduced modern firefighting methods to the Brigade, and increased the number of stations.

Shaw was born in Ballymore, County Cork
Ballymore, County Cork
Ballymore is a small village on the Great Island in Cork Harbour, approximately from the town of Cobh and from Cork near the south coast of Ireland....
, Ireland
Ireland
Ireland is an island to the northwest of continental Europe. It is the third-largest island in Europe and the twentieth-largest island on Earth...
and was educated first at a school in Queenstown and then at Trinity College, Dublin
Trinity College, Dublin
Trinity College, Dublin , formally known as the College of the Holy and Undivided Trinity of Queen Elizabeth near Dublin, was founded in 1592 by letters patent from Queen Elizabeth I as the "mother of a university", Extracts from Letters Patent of Elizabeth I, 1592: "...we...found and...
. Shaw considered joining the Church but decided on a career in the Army and gained a commission in the North Cork Rifles, a militia
Militia
The term militia is commonly used today to refer to a military force composed of ordinary citizens to provide defense, emergency law enforcement, or paramilitary service, in times of emergency without being paid a regular salary or committed to a fixed term of service. It is a polyseme with...
regiment
Regiment
A regiment is a major tactical military unit, composed of variable numbers of batteries, squadrons or battalions, commanded by a colonel or lieutenant colonel...
of the British Army
British Army
The British Army is the land warfare branch of Her Majesty's Armed Forces in the United Kingdom. It came into being with the unification of the Kingdom of England and Scotland into the Kingdom of Great Britain in 1707. The new British Army incorporated Regiments that had already existed in England...
(later the 9th Battalion, King's Royal Rifle Corps
King's Royal Rifle Corps
The King's Royal Rifle Corps was a British Army infantry regiment, originally raised in colonial North America as the Royal Americans, and recruited from American colonists. Later ranked as the 60th Regiment of Foot, the regiment served for more than 200 years throughout the British Empire...
) from 1854 to 1860, reaching the rank of captain
Captain (British Army and Royal Marines)
Captain is a junior officer rank of the British Army and Royal Marines. It ranks above Lieutenant and below Major and has a NATO ranking code of OF-2. The rank is equivalent to a Lieutenant in the Royal Navy and to a Flight Lieutenant in the Royal Air Force...
. He resigned from the Army on being appointed Chief Constable of Belfast in charge of both the police and the fire brigade. In 1861, following the death of the then-head, James Braidwood
James Braidwood (fire fighter)
James Braidwood founded the world's first municipal fire service in Edinburgh in 1824, and was the first director of the London Fire Engine Establishment...
, in the line of duty while fighting a massive fire in Tooley Street
Tooley Street
Tooley Street is a road in South London connecting London Bridge to St Saviour's Dock; it runs past Tower Bridge on the Southwark side of the River Thames, and forms part of the A200 road. - St Olave :...
, Shaw was engaged as head of the London Fire Engine Establishment. In 1865, Parliament passed the Metropolitan Fire Brigade Act, placing responsibility for fire protection in the Metropolitan Fire Brigade, to be supervised by the Metropolitan Board of Works
Metropolitan Board of Works
The Metropolitan Board of Works was the principal instrument of London-wide government from 1855 until the establishment of the London County Council in 1889. Its principal responsibility was to provide infrastructure to cope with London's rapid growth, which it successfully accomplished. The MBW...
. Shaw headed the new brigade.

Shaw was an influential thinker on firefighting, publishing at least one book on the subject. He is noted for his adoption of the famous brass helmets. Among his other accomplishments, Shaw expanded the use of steam fire engines. He introduced the use of telegraph for communication between stations. He greatly expanded the number of fire stations.

Shaw was a well-known socialite (which led to his immortalization in operetta
Operetta
Operetta is a genre of light opera, light in terms both of music and subject matter. It is also closely related, in English-language works, to forms of musical theatre.-Origins:...
, see below) and a personal friend of the Prince of Wales
Prince of Wales
Prince of Wales is a title traditionally granted to the heir apparent to the reigning monarch of the United Kingdom of Great Britain and Northern Ireland and the 15 other independent Commonwealth realms...
(later Edward VII). A firefighting outfit was always kept ready at Charing Cross
Charing Cross
Charing Cross denotes the junction of Strand, Whitehall and Cockspur Street, just south of Trafalgar Square in central London, England. It is named after the now demolished Eleanor cross that stood there, in what was once the hamlet of Charing. The site of the cross is now occupied by an equestrian...
Fire Station in case the Royal heir chose to firefight. 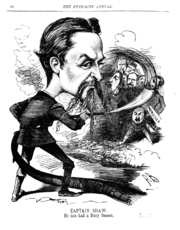 Shaw is best remembered today as the "Captain Shaw" to whom the Fairy Queen in Gilbert and Sullivan
Gilbert and Sullivan
Gilbert and Sullivan refers to the Victorian-era theatrical partnership of the librettist W. S. Gilbert and the composer Arthur Sullivan . The two men collaborated on fourteen comic operas between 1871 and 1896, of which H.M.S...
's Iolanthe
Iolanthe
Iolanthe; or, The Peer and the Peri is a comic opera with music by Arthur Sullivan and libretto by W. S. Gilbert. It is one of the Savoy operas and is the seventh collaboration of the fourteen between Gilbert and Sullivan....
addresses herself, wondering if his "brigade with cold cascade" could quench her great love. Shaw was present in the stalls at the first night of Iolanthe in 1882, and Alice Barnett
Alice Barnett
Alice Barnett was an English singer and actress, best known for her performances in contralto roles of the Gilbert and Sullivan operas with the D'Oyly Carte Opera Company....
, playing the Fairy Queen, addressed herself directly to him. One can only guess at his reaction, but legend has it that he stood up and took a bow. 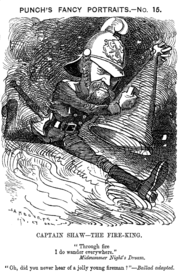 In addition, a historic fireboat, named the Massey Shaw
Massey Shaw
The Massey Shaw is a former London Fire Brigade fireboat. The historic vessel was saved from dereliction by a group of enthusiasts who are currently engaged in its restoration....
, still exists, and was recently renovated. Built in 1935, it made several trips to Dunkirk during the evacuation of British troops from France
France
The French Republic , The French Republic , The French Republic , (commonly known as France , is a unitary semi-presidential republic in Western Europe with several overseas territories and islands located on other continents and in the Indian, Pacific, and Atlantic oceans. Metropolitan France...
in 1940. His former home, Winchester House in Southwark
Southwark
Southwark is a district of south London, England, and the administrative headquarters of the London Borough of Southwark. Situated east of Charing Cross, it forms one of the oldest parts of London and fronts the River Thames to the north...
, is part of the London Fire Brigade Museum
London Fire Brigade Museum
The London Fire Brigade Museum covers the history of firefighting since 1666 . The museum houses old fire appliances and other equipment. It is also possible to see fire brigade recruits training....
, an English Heritage
English Heritage
English Heritage . is an executive non-departmental public body of the British Government sponsored by the Department for Culture, Media and Sport...
Blue plaque
Blue plaque
A blue plaque is a permanent sign installed in a public place to commemorate a link between that location and a famous person or event, serving as a historical marker....
adorns the building and states that Shaw lived there.