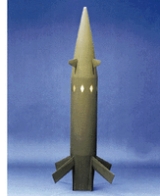 The Extended Range Guided Munition was a precision guided rocket
Rocket
A rocket is a missile, spacecraft, aircraft or other vehicle which obtains thrust from a rocket engine. In all rockets, the exhaust is formed entirely from propellants carried within the rocket before use. Rocket engines work by action and reaction...
-assisted 5-inch (12.7 cm) artillery shell development by Raytheon
Raytheon
Raytheon Company is a major American defense contractor and industrial corporation with core manufacturing concentrations in weapons and military and commercial electronics. It was previously involved in corporate and special-mission aircraft until early 2007...
for the U.S. Navy. The program was cancelled in March 2008 after twelve years of development and over 600 million dollars in funding. The developmental round was designated EX 171. ERGM consisted of three major subsections; propulsion (rocket motor), warhead, and Guidance, Navigation and Control section. ERGM is fired from the 5 inch 62 Caliber Mark 45 gun Mod 4 at which point the fins deploy,rocket motor would ignite and lift the munition to at least 80,000 feet (24 km) when the canard
Canard (aeronautics)
In aeronautics, canard is an airframe configuration of fixed-wing aircraft in which the forward surface is smaller than the rearward, the former being known as the "canard", while the latter is the main wing...
s would deploy and guide the ERGM to the target based on GPS guidance. It was to be used on Arleigh Burke class destroyer
Arleigh Burke class destroyer
The Arleigh Burke class of guided missile destroyers is the United States Navy's first class of destroyer built around the Aegis combat system and the SPY-1D multi-function phased array radar. The class is named for Admiral Arleigh "31-Knot" Burke, the most famous American destroyer officer of...
s (hulls DDG-81 through 112).

Despite the long development time the ERGM never worked as reliably as the older but significantly less expensive laser guided M712 Copperhead
M712 Copperhead
The M712 Copperhead is a caliber cannon-launched, fin-stabilized, terminally laser guided, explosive projectile intended to engage hard point targets such as tanks, self-propelled howitzers or other high-value targets. It may be fired from different artillery pieces, such as the M114, M109 and...
. During development, the ERGM failed several tests in which the tail fins failed to deploy at launch, rocket motors did not ignite or the electronic components did not survive the stress of being shot from a deck gun. Rising cost was another likely factor in cancellation. The unit cost of the shell more than tripled, from $45,000 in 1997 to $191,000 by 2006, reducing the projected buy from 8,500 to about 3,150(in contrast the Copperhead average unit production price was about $30,000). BTERM is another U.S. Navy developmental round that includes GPS guidance in an artillery shell; it too was terminated in 2008 after 4+ years of development by ATK. XM982 Excalibur
XM982 Excalibur
The M982 Excalibur is a 155 mm extended range guided artillery shell developed by Raytheon Missile Systems and BAE Systems Bofors...
is a U.S. Army round in development. A similar shell as part of the Vulcano line of projectiles is on the horizon from the Oto Melara
Oto Melara
Oto Melara is an Italian defence company with factories in Brescia and La Spezia. It was founded in 1905 as a joint venture of Vickers and Terni. During World War I, Vickers Terni produced many weapons with calibre 40 mm and upwards. In 1929 the company was renamed Odero Terni Orlando with the...
division of Finmeccanica
Finmeccanica
Finmeccanica S.p.A. is an Italian conglomerate. Finmeccanica is the second largest industrial group and the largest of the hi-tech industrial groups based in Italy. It works in the fields of defence, aerospace, security, automation, transport and energy...
of Italy. The reported range of these projectiles is 120 km for the 155mm calibre and 80 km for 127mm calibre, which is already being installed on some German Navy vessels.