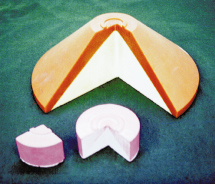 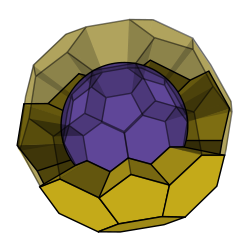 An explosive lens—as used, for example, in nuclear weapon
Nuclear weapon
A nuclear weapon is an explosive device that derives its destructive force from nuclear reactions, either fission or a combination of fission and fusion. Both reactions release vast quantities of energy from relatively small amounts of matter. The first fission bomb test released the same amount...
s—is a highly specialized explosive charge, a special type of a shaped charge
Shaped charge
A shaped charge is an explosive charge shaped to focus the effect of the explosive's energy. Various types are used to cut and form metal, to initiate nuclear weapons, to penetrate armor, and in the oil and gas industry...
. In general, it is a device composed of several explosive charges that are shaped in such a way as to change the shape of the detonation wave passing through it, conceptually similar to the effect of an optical lens on light. The explosive charges that make it up have different rates of detonation, just as an optical lens is composed of media having different effects on the velocities of light passing though them. To convert spherically expanding wavefront
Wavefront
In physics, a wavefront is the locus of points having the same phase. Since infrared, optical, x-ray and gamma-ray frequencies are so high, the temporal component of electromagnetic waves is usually ignored at these wavelengths, and it is only the phase of the spatial oscillation that is described...
into spherically converging by single boundary between fast and slow explosives, the boundary shape must be a hyperboloid; to convert spherically diverging front into the flat one - paraboloid
Paraboloid
In mathematics, a paraboloid is a quadric surface of special kind. There are two kinds of paraboloids: elliptic and hyperbolic. The elliptic paraboloid is shaped like an oval cup and can have a maximum or minimum point....
, and so on. Several boundaries can be used to reduce aberration
Aberration
An aberration is something that deviates from the normal way.Aberration may refer to:In optics and physics:*Optical aberration, an imperfection in image formation by an optical system...
s (deviations from intended shape) of the final wavefront.


Use in nuclear weapons

In a nuclear weapon, an array of explosive lenses is used to change the several approximately spherical diverging detonation waves into a single spherical converging one. The converging wave is then used to collapse the various shells (tamper, reflector, pusher, etc.) and finally compresses the core (pit
Pit (nuclear weapon)
The pit is the core of an implosion weapon – the fissile material and any neutron reflector or tamper bonded to it. Some weapons tested during the 1950s used pits made with U-235 alone, or in composite with plutonium, but all-plutonium pits are the smallest in diameter and have been the standard...
) of fissionable material to a prompt critical
Prompt critical
In nuclear engineering, an assembly is prompt critical if for each nuclear fission event, one or more of the immediate or prompt neutrons released causes an additional fission event. This causes a rapid, exponential increase in the number of fission events...
state. They are usually machined from a plastic bonded explosive and an inert insert, called a wave-shaper, which is often a dense foam
Foam
-Definition:A foam is a substance that is formed by trapping gas in a liquid or solid in a divided form, i.e. by forming gas regions inside liquid regions, leading to different kinds of dispersed media...
or plastic
Plastic
A plastic material is any of a wide range of synthetic or semi-synthetic organic solids used in the manufacture of industrial products. Plastics are typically polymers of high molecular mass, and may contain other substances to improve performance and/or reduce production costs...
, though many other materials can be used. Other, mainly older explosive lenses do not include a wave shaper, but employ two explosive types that have significantly different velocities of detonation
Explosive velocity
Explosive velocity, also known as detonation velocity or velocity of detonation , is the velocity at which the shock wave front travels through a detonated explosive. The data listed for a specific substance is usually a rough prediction based upon gas behavior theory , as in practice it is...
(VoD), which are in the range from 5 to 9 km/s. The use of the low- and high-speed explosives again results in a spherical converging detonation wave to compress the physics package. The original Gadget device used in the Trinity test
Trinity test
Trinity was the code name of the first test of a nuclear weapon. This test was conducted by the United States Army on July 16, 1945, in the Jornada del Muerto desert about 35 miles southeast of Socorro, New Mexico, at the new White Sands Proving Ground, which incorporated the Alamogordo Bombing...
and Fat Man
Fat Man
"Fat Man" is the codename for the atomic bomb that was detonated over Nagasaki, Japan, by the United States on August 9, 1945. It was the second of the only two nuclear weapons to be used in warfare to date , and its detonation caused the third man-made nuclear explosion. The name also refers more...
dropped on Nagasaki used Baratol
Baratol (explosive)
Baratol is an explosive made of a mixture of TNT and barium nitrate, with a small quantity of wax used as a binder. TNT typically makes up 25-33% of the mixture...
as the low-VoD explosive and Composition B
Composition B
Composition B, colloquially "comp B", is an explosive consisting of castable mixtures of RDX and TNT. It is used as the main explosive filling in artillery projectiles, rockets, land mines, hand grenades, sticky bombs and various other munitions...
as the fast, but other combinations can be used.

The illustration to the left represents a cross section through a segment of a polygonal wedge. The wedges are fitted together to form a spherical
Sphere
A sphere is a perfectly round geometrical object in three-dimensional space, such as the shape of a round ball. Like a circle in two dimensions, a perfect sphere is completely symmetrical around its center, with all points on the surface lying the same distance r from the center point...
device. The exploding-bridgewire detonator
Exploding-bridgewire detonator
The exploding-bridgewire detonator is a type of detonator used to initiate the detonation reaction in explosive materials, similar to a blasting cap in that it is fired using an electric current...
at the left triggers a semi-spherical detonation wave
Shock wave
A shock wave is a type of propagating disturbance. Like an ordinary wave, it carries energy and can propagate through a medium or in some cases in the absence of a material medium, through a field such as the electromagnetic field...
through the high-speed outer explosive. (It is semispherical because the exploding bridgewire acts as a point-detonator.) As the wave is transferred to the precisely shaped inner explosive, a new spherical wave — centered on the object — is formed. The successful functioning of this device hinges on the simultaneous initiation of the wave in each segment, uniformity and precision in the speed of the wave, and correctness and accuracy in the shape of the interface between the two explosives.