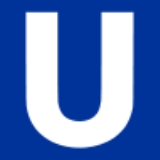 Encyclopedia
The Frankfurt U-Bahn, together with the Frankfurt S-Bahn
Rhine-Main S-Bahn
The Rhine-Main S-Bahn system is an integrated rapid transit and commuter transport system for the Frankfurt/Rhine-Main region, which includes the cities Frankfurt am Main, Wiesbaden, Mainz, Offenbach am Main, Hanau and Darmstadt...
and the Frankfurt Straßenbahn, is the backbone of the public transport
Public transport
Public transport is a shared passenger transportation service which is available for use by the general public, as distinct from modes such as taxicab, car pooling or hired buses which are not shared by strangers without private arrangement.Public transport modes include buses, trolleybuses, trams...
system of Frankfurt
Frankfurt
Frankfurt am Main , commonly known simply as Frankfurt, is the largest city in the German state of Hesse and the fifth-largest city in Germany, with a 2010 population of 688,249. The urban area had an estimated population of 2,300,000 in 2010...
, Germany
Germany
Germany , officially the Federal Republic of Germany , is a federal parliamentary republic in Europe. The country consists of 16 states while the capital and largest city is Berlin. Germany covers an area of 357,021 km2 and has a largely temperate seasonal climate...
. Its name derives from the German term for underground
Rapid transit
A rapid transit, underground, subway, elevated railway, metro or metropolitan railway system is an electric passenger railway in an urban area with a high capacity and frequency, and grade separation from other traffic. Rapid transit systems are typically located either in underground tunnels or on...
, Untergrundbahn. The U-Bahn opened in 1968 and now consists of 87 stations on nine lines, which have a total length of 65 km (40.4 mi). About 59% of the total track length is underground. About 300,000 people use it every day. 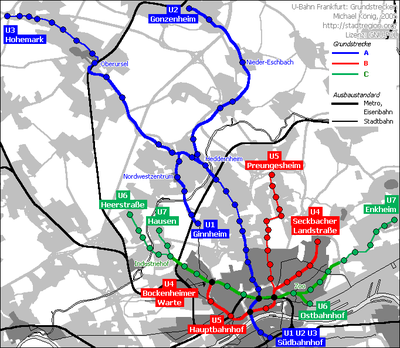 There are currently 9 lines: