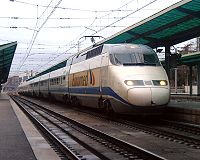 Euromed is a high speed rail service which uses series 101 EMU
Electric multiple unit
An electric multiple unit or EMU is a multiple unit train consisting of self-propelled carriages, using electricity as the motive power. An EMU requires no separate locomotive, as electric traction motors are incorporated within one or a number of the carriages...
rolling stock with bogies adapted for use on the 1,668mm Iberian gauge
Iberian gauge
Iberian gauge is the name given to the track gauge most extensively used by the railways of Spain and Portugal: namely ....
track. Traction current, supplied by overhead lines
Overhead lines
Overhead lines or overhead wires are used to transmit electrical energy to trams, trolleybuses or trains at a distance from the energy supply point...
, can be either 3,000 volts, direct current
Direct current
Direct current is the unidirectional flow of electric charge. Direct current is produced by such sources as batteries, thermocouples, solar cells, and commutator-type electric machines of the dynamo type. Direct current may flow in a conductor such as a wire, but can also flow through...
or 25,000 volts, 50 Hz, alternating current
Alternating current
In alternating current the movement of electric charge periodically reverses direction. In direct current , the flow of electric charge is only in one direction....
. In normal commercial service these trains travel at 200 km/h and have a top speed of 220 km/h although during testing 250 km/h was reached. The fleet of six units was built by the French multinational Alstom
Alstom
Alstom is a large multinational conglomerate which holds interests in the power generation and transport markets. According to the company website, in the years 2010-2011 Alstom had annual sales of over €20.9 billion, and employed more than 85,000 people in 70 countries. Alstom's headquarters are...
.

Euromed entered commercial service on June 16, 1997, operated by RENFE
RENFE
Renfe Operadora is the state-owned company which operates freight and passenger trains on the 1668-mm "Iberian gauge" and 1435-mm "European gauge" networks of the Spanish national railway infrastructure company ADIF .- History :The name RENFE is derived from that of the former Spanish National...
, along the Mediterranean corridor, between the cities of Barcelona
Barcelona
Barcelona is the second largest city in Spain after Madrid, and the capital of Catalonia, with a population of 1,621,537 within its administrative limits on a land area of...
, Tarragona
Tarragona
Tarragona is a city located in the south of Catalonia on the north-east of Spain, by the Mediterranean. It is the capital of the Spanish province of the same name and the capital of the Catalan comarca Tarragonès. In the medieval and modern times it was the capital of the Vegueria of Tarragona...
, Castellon de la Plana
Castellón de la Plana
Castellón de la Plana or Castelló de la Plana is the capital city of the province of Castelló, in the Valencian Community, Spain, in the east of the Iberian Peninsula, on the Costa del Azahar by the Mediterranean Sea...
, Valencia and Alicante
Alicante
Alicante or Alacant is a city in Spain, the capital of the province of Alicante and of the comarca of Alacantí, in the south of the Valencian Community. It is also a historic Mediterranean port. The population of the city of Alicante proper was 334,418, estimated , ranking as the second-largest...
(523 km).

On March 30, 2002 in Tarragona
Tarragona
Tarragona is a city located in the south of Catalonia on the north-east of Spain, by the Mediterranean. It is the capital of the Spanish province of the same name and the capital of the Catalan comarca Tarragonès. In the medieval and modern times it was the capital of the Vegueria of Tarragona...
a Euromed train traveling across points at 155 km/h collided with a local train which had just left Torredembarra
Torredembarra
Torredembarra is a small town in the comarca of the Tarragonès, in the province of Tarragona, Catalonia, Spain.- External links :***...
station. The impact caused both trains to derail and resulted in two fatalities and 90 injured.