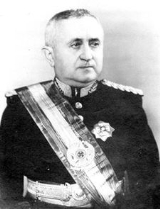 Encyclopedia
Eurico Gaspar Dutra was a Brazil
Brazil
Brazil , officially the Federative Republic of Brazil , is the largest country in South America. It is the world's fifth largest country, both by geographical area and by population with over 192 million people...
ian marshal
Marshal (Brazil)
Marshal is the highest rank in both the Brazilian Army and the Brazilian Air Force, although the latter is titled Marechal-do-Ar . These ranks are equivalent to that of Admiral in the Navy...
, politician and president of Brazil from 1946–1951.

He was born in Cuiabá
Cuiabá
Under the Koppen climate classification, Cuiaba features a tropical wet and dry climate. Cuiabá is famous for its searing heat, although temperatures in winter can arrive sporadically at 10 degrees, indeed atypical, caused by cold fronts coming from the south, and that may only last one or two...
, Mato Grosso
Mato Grosso
Mato Grosso is one of the states of Brazil, the third largest in area, located in the western part of the country.Neighboring states are Rondônia, Amazonas, Pará, Tocantins, Goiás and Mato Grosso do Sul. It also borders Bolivia to the southwest...
, and like many other Brazilians, was from Azorean
Azores
The Archipelago of the Azores is composed of nine volcanic islands situated in the middle of the North Atlantic Ocean, and is located about west from Lisbon and about east from the east coast of North America. The islands, and their economic exclusion zone, form the Autonomous Region of the...
-Portuguese origin. In 1936, he was appointed as Minister of War, a post he held until the end of WWII.

Gaspar Dutra was one of the generals in charge of the soldiers on the Brazilian Expeditionary Force
Brazilian Expeditionary Force
The Brazilian Expeditionary Force or BEF was a force about 25,700 men and women arranged by the Army and Air Force to fight alongside the Allied forces in the Mediterranean Theatre of World War II...
that entered World War II
World War II
World War II, or the Second World War , was a global conflict lasting from 1939 to 1945, involving most of the world's nations—including all of the great powers—eventually forming two opposing military alliances: the Allies and the Axis...
, and he succeeded José Linhares
José Linhares
José Linhares, .Brazilian Chief of Justice and lifetime senator. Assumed the presidency of Brazil in 1945–1946, between the deposition of Getúlio Vargas and the oath of Eurico Gaspar Dutra. During his provisional administration, measures were taken to re-establish a democratic system of...
in the presidency.

He left it in 1951 and until then, he was considered as a presidential candidate.

Gaspar Dutra died in Rio de Janeiro
Rio de Janeiro
Rio de Janeiro , commonly referred to simply as Rio, is the capital city of the State of Rio de Janeiro, the second largest city of Brazil, and the third largest metropolitan area and agglomeration in South America, boasting approximately 6.3 million people within the city proper, making it the 6th...
, Brazil
Brazil
Brazil , officially the Federative Republic of Brazil , is the largest country in South America. It is the world's fifth largest country, both by geographical area and by population with over 192 million people...
's former capital.
The source of this article is wikipedia, the free encyclopedia.  The text of this article is licensed under the GFDL.