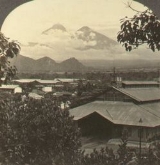 In 2003 the city had a population of about 68,000 people. It is on the border of the central highlands and the Pacific coastal plain.

The city is among the more industrialized areas of the country. One of the most important agricultural products of the region is sugar cane. Other products are tobacco
Tobacco
Tobacco is an agricultural product processed from the leaves of plants in the genus Nicotiana. It can be consumed, used as a pesticide and, in the form of nicotine tartrate, used in some medicines...
, seafood
Seafood
Seafood is any form of marine life regarded as food by humans. Seafoods include fish, molluscs , crustaceans , echinoderms . Edible sea plants, such as some seaweeds and microalgae, are also seafood, and are widely eaten around the world, especially in Asia...
, and cattle
Cattle
Cattle are the most common type of large domesticated ungulates. They are a prominent modern member of the subfamily Bovinae, are the most widespread species of the genus Bos, and are most commonly classified collectively as Bos primigenius...
.
Escuintla is bathed by the waters of the Pacific, and produces about 43 percent of gross domestic product of Guatemala, is statistically the department, province or region in Mesoamerica with lower unemployment and extreme poverty, this contrasts with the economic and social reality of Guatemala