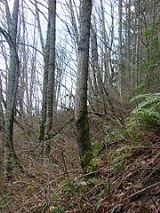 Encyclopedia
Downhill creep, or commonly just creep, is the slow downward progression of rock
Rock (geology)
In geology, rock or stone is a naturally occurring solid aggregate of minerals and/or mineraloids.The Earth's outer solid layer, the lithosphere, is made of rock. In general rocks are of three types, namely, igneous, sedimentary, and metamorphic...
and soil
Soil
Soil is a natural body consisting of layers of mineral constituents of variable thicknesses, which differ from the parent materials in their morphological, physical, chemical, and mineralogical characteristics...
down a low grade slope; it can also refer to slow deformation of such materials as a result of prolonged pressure and stress. Creep may appear to an observer to be continuous, but it really is the sum of numerous minute, discrete movements of slope material caused by the force of gravity. Friction being the primary force to resist gravity is produced when one body of material slides past another offering a mechanical resistance between the two which acts on holding objects (or slopes) in place. As slope on a hill increases, the gravitational force that is perpendicular to the slope decreases and results in less friction between the material that could cause the slope to slide.

The rate of soil creep down a slope depends on the steepness (gradient) of the slope, water absorption and content, type of sediment and material, and lastly vegetation. The rate of creep will take into account all of these factors to decide whether or not the hillside will progress downward. Creep is what is responsible for the rounded shape of hillsides.

Water is a very important factor when discussing soil deformation and movement. For instance, a sandcastle will only stand up when it is made with damp sand. The water offers cohesion to the sand which binds the sand particles together. However, pouring water over the sandcastle destroys it. This is because the presence of too much water fills the pores between the grains with water creating a slip plane between the particles and offering no cohesion causing them to slip and slide away. This holds true for hillsides and creep as well. The presence of water may help the hillside stay put and give it cohesion, but in a very wet environment or during or after a large amount of precipitation the pores between the grains can become saturated with water and cause the ground to slide along the slip plane it creates.

Creep can also be caused by the expansion of materials such as clay
Clay
Clay is a general term including many combinations of one or more clay minerals with traces of metal oxides and organic matter. Geologic clay deposits are mostly composed of phyllosilicate minerals containing variable amounts of water trapped in the mineral structure.- Formation :Clay minerals...
when they are exposed to water. Clay expands when wet, then contracts after drying. The expansion portion pushes downhill, then the contraction results in consolidation at the new offset.

Vegetation plays a role with slope stability and creep. When a hillside contains many trees, ferns, and shrubs their roots create an interlocking network that can strengthen unconsolidated material. They also aid in absorbing the excess water in the soil to help keep the slope stable. However, they do add to the weight of the slope giving gravity that much more of a driving force to act on in pushing the slope downward. In general, though, slopes without vegetation have a greater chance of movement.

is the diffusion constant, and

is the critical gradient for sliding of dry soil.