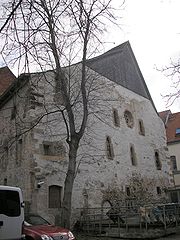 The Erfurt Synagogue in Erfurt
Erfurt
Erfurt is the capital city of Thuringia and the main city nearest to the geographical centre of Germany, located 100 km SW of Leipzig, 150 km N of Nuremberg and 180 km SE of Hannover. Erfurt Airport can be reached by plane via Munich. It lies in the southern part of the Thuringian...
, Germany
Germany
Germany , officially the Federal Republic of Germany , is a federal parliamentary republic in Europe. The country consists of 16 states while the capital and largest city is Berlin. Germany covers an area of 357,021 km2 and has a largely temperate seasonal climate...
, was built c. 1100. It is thought to be the oldest synagogue  building still standing in Europe. It is planned to permanently house the Erfurt Treasure
Erfurt Treasure
The Erfurt Treasure is a hoard of coins, goldsmith's work and jewelry that belonged to Jews, who secreted them hastily in 1349 at the time of the Black Death pogroms...
and is currently undergoing renovation.


History of the building

The oldest parts of the building date from the 11th century and the medieval building is preserved to a remarkable degree, including the roof. The building was used for purposes other than worship for many years.


Other Synagogues in Erfurt

The Erfurt Small Synagogue was built in 1840 and was used through 1884. It was restored in 1998 and is an event venue. The building featured a Classically-influenced façade
Facade
A facade or façade is generally one exterior side of a building, usually, but not always, the front. The word comes from the French language, literally meaning "frontage" or "face"....
and interior.

In 1884 the community constructed a magnificent Moorish Revival
Moorish Revival
Moorish Revival or Neo-Moorish is one of the exotic revival architectural styles that were adopted by architects of Europe and the Americas in the wake of the Romanticist fascination with all things oriental...
synagogue. It was destroyed on Kristallnacht
Kristallnacht
Kristallnacht, also referred to as the Night of Broken Glass, and also Reichskristallnacht, Pogromnacht, and Novemberpogrome, was a pogrom or series of attacks against Jews throughout Nazi Germany and parts of Austria on 9–10 November 1938.Jewish homes were ransacked, as were shops, towns and...
.