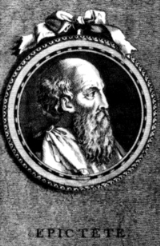 "But to be hanged—is that not unendurable?" Even so, when a man feels that it is reasonable, he goes off and hangs himself.

When you close your doors, and make darkness within, remember never to say that you are alone, for you are not alone; nay, God is within, and your genius is within. And what need have they of light to see what you are doing?

No thing great is created suddenly, any more than a bunch of grapes or a fig. If you tell me that you desire a fig, I answer you that there must be time. Let it first blossom, then bear fruit, then ripen.

Practice yourself, for heaven's sake, in little things; and thence proceed to greater.

It is difficulties that show what men are.

The good or ill of man lies within his own will.

In theory there is nothing to hinder our following what we are taught; but in life there are many things to draw us aside.

Only the educated are free.