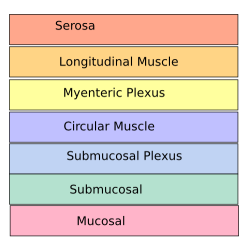 It is derived from neural crest
Neural crest
Neural crest cells are a transient, multipotent, migratory cell population unique to vertebrates that gives rise to a diverse cell lineage including melanocytes, craniofacial cartilage and bone, smooth muscle, peripheral and enteric neurons and glia....
.

The ENS is capable of autonomous functions such as the coordination of reflex
Reflex
A reflex action, also known as a reflex, is an involuntary and nearly instantaneous movement in response to a stimulus. A true reflex is a behavior which is mediated via the reflex arc; this does not apply to casual uses of the term 'reflex'.-See also:...
es; although it receives considerable innervation from the autonomic nervous system
Autonomic nervous system
The autonomic nervous system is the part of the peripheral nervous system that acts as a control system functioning largely below the level of consciousness, and controls visceral functions. The ANS affects heart rate, digestion, respiration rate, salivation, perspiration, diameter of the pupils,...
, it can and does operate independently of the brain and the spinal cord. Its study is the focus of neurogastroenterology
Neurogastroenterology
Neurogastroenterology is a research area in the field of Gastroenterology which regards interactions of the central nervous system and the gut - the so-called brain-gut axis. Important research focuses upon upward and downward neural connections and upon endocrine influences on gut function....
.

ENS function can be damaged by ischemia
Ischemia
In medicine, ischemia is a restriction in blood supply, generally due to factors in the blood vessels, with resultant damage or dysfunction of tissue. It may also be spelled ischaemia or ischæmia...
. Transplantation, which had been described as a theoretical possibility in earlier versions of this article, is now (2011) a clinical reality in the United States and is performed at a number of approved centers.

The ENS consists of some one hundred million neuron
Neuron
A neuron is an electrically excitable cell that processes and transmits information by electrical and chemical signaling. Chemical signaling occurs via synapses, specialized connections with other cells. Neurons connect to each other to form networks. Neurons are the core components of the nervous...
s, one thousandth of the number of neurons in the brain
Brain
The brain is the center of the nervous system in all vertebrate and most invertebrate animals—only a few primitive invertebrates such as sponges, jellyfish, sea squirts and starfishes do not have one. It is located in the head, usually close to primary sensory apparatus such as vision, hearing,...
, and considerably more than the number of neurons in the spinal cord
Spinal cord
The spinal cord is a long, thin, tubular bundle of nervous tissue and support cells that extends from the brain . The brain and spinal cord together make up the central nervous system...
. The enteric nervous system is embedded in the lining of the gastrointestinal system.

The neurons of the ENS are collected into two types of ganglia: myenteric (Auerbach's) and submucosal (Meissner's) plexuses. Myenteric plexuses are located between the inner and outer layers of the muscularis externa
Muscularis externa
The muscular coat is a region of muscle in many organs in the vertebrate body, adjacent to the submucosa membrane...
, while submucosal plexuses are located in the submucosa
Submucosa
In the gastrointestinal tract, the submucosa is the layer of dense irregular connective tissue or loose connective tissue that supports the mucosa, as well as joins the mucosa to the bulk of underlying smooth muscle .-Contents:Blood vessels, lymphatic vessels, and nerves will run through...
.

In vertebrates the enteric nervous system includes efferent neurons, afferent neurons, and interneurons, all of which make the enteric nervous system capable of carrying reflexes and acting as an integrating center in the absence of CNS input. There are more nerve cells in the enteric nervous system than in the entire spinal cord. The sensory neurons report on mechanical and chemical conditions. Through intestinal muscles, the motor neurons control peristalsis
Peristalsis
Peristalsis is a radially symmetrical contraction and relaxation of muscles which propagates in a wave down the muscular tube, in an anterograde fashion. In humans, peristalsis is found in the contraction of smooth muscles to propel contents through the digestive tract. Earthworms use a similar...
and churning of intestinal contents. Other neurons control the secretion of enzymes. The enteric nervous system also makes use of more than 30 neurotransmitters, most of which are identical to the ones found in CNS, such as acetylcholine
Acetylcholine
The chemical compound acetylcholine is a neurotransmitter in both the peripheral nervous system and central nervous system in many organisms including humans...
, dopamine
Dopamine
Dopamine is a catecholamine neurotransmitter present in a wide variety of animals, including both vertebrates and invertebrates. In the brain, this substituted phenethylamine functions as a neurotransmitter, activating the five known types of dopamine receptors—D1, D2, D3, D4, and D5—and their...
, and serotonin
Serotonin
Serotonin or 5-hydroxytryptamine is a monoamine neurotransmitter. Biochemically derived from tryptophan, serotonin is primarily found in the gastrointestinal tract, platelets, and in the central nervous system of animals including humans...
. More than 90% of the body's serotonin lies in the gut; as well as about 50% of the body's dopamine, which is currently being studied to further our understanding of its utility in the brain.

The enteric nervous system has the capacity to alter its response depending on such factors as bulk and nutrient composition. In addition, ENS contains support cells which are similar to astroglia of the brain and a diffusion barrier around the capillaries surrounding ganglia which is similar to the blood-brain barrier
Blood-brain barrier
The blood–brain barrier is a separation of circulating blood and the brain extracellular fluid in the central nervous system . It occurs along all capillaries and consists of tight junctions around the capillaries that do not exist in normal circulation. Endothelial cells restrict the diffusion...
of cerebral blood vessels.
The source of this article is wikipedia, the free encyclopedia.  The text of this article is licensed under the GFDL.