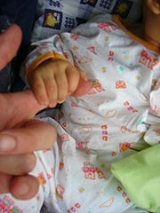 Encyclopedia
A reflex action, also known as a reflex, is an involuntary and nearly instantaneous movement in response to a stimulus
Stimulus (physiology)
In physiology, a stimulus is a detectable change in the internal or external environment. The ability of an organism or organ to respond to external stimuli is called sensitivity....
. A true reflex is a behavior which is mediated via the reflex arc
Reflex arc
A reflex arc is a neural pathway that controls an action reflex. In higher animals, most sensory neurons do not pass directly into the brain, but synapse in the spinal cord...
; this does not apply to casual uses of the term 'reflex'.