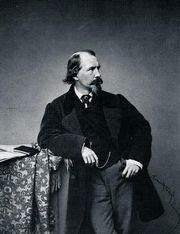 Emanuel von Geibel German
Germany
Germany , officially the Federal Republic of Germany , is a federal parliamentary republic in Europe. The country consists of 16 states while the capital and largest city is Berlin. Germany covers an area of 357,021 km2 and has a largely temperate seasonal climate...
poet
Poet
A poet is a person who writes poetry. A poet's work can be literal, meaning that his work is derived from a specific event, or metaphorical, meaning that his work can take on many meanings and forms. Poets have existed since antiquity, in nearly all languages, and have produced works that vary...
and playwright
Playwright
A playwright, also called a dramatist, is a person who writes plays.The term is not a variant spelling of "playwrite", but something quite distinct: the word wright is an archaic English term for a craftsman or builder...
, was born at Lübeck
Lübeck
The Hanseatic City of Lübeck is the second-largest city in Schleswig-Holstein, in northern Germany, and one of the major ports of Germany. It was for several centuries the "capital" of the Hanseatic League and, because of its Brick Gothic architectural heritage, is listed by UNESCO as a World...
, the son of a pastor in the city.

He was originally intended for his father's profession and studied at Bonn
Bonn
Bonn is the 19th largest city in Germany. Located in the Cologne/Bonn Region, about 25 kilometres south of Cologne on the river Rhine in the State of North Rhine-Westphalia, it was the capital of West Germany from 1949 to 1990 and the official seat of government of united Germany from 1990 to 1999....
and Berlin
Berlin
Berlin is the capital city of Germany and is one of the 16 states of Germany. With a population of 3.45 million people, Berlin is Germany's largest city. It is the second most populous city proper and the seventh most populous urban area in the European Union...
, but his real interests lay not in theology
Theology
Theology is the systematic and rational study of religion and its influences and of the nature of religious truths, or the learned profession acquired by completing specialized training in religious studies, usually at a university or school of divinity or seminary.-Definition:Augustine of Hippo...
but in classical and romance philology
Philology
Philology is the study of language in written historical sources; it is a combination of literary studies, history and linguistics.Classical philology is the philology of Greek and Classical Latin...
. In 1838 he accepted a tutorship at Athens
Athens
Athens , is the capital and largest city of Greece. Athens dominates the Attica region and is one of the world's oldest cities, as its recorded history spans around 3,400 years. Classical Athens was a powerful city-state...
, where he remained until 1840. In the same year he published, in conjunction with his friend Ernst Curtius
Ernst Curtius
You may be looking for Ernst Robert Curtius .Ernst Curtius was a German archaeologist and historian.-Biography:...
, a volume of translations from the Greek. His first poems in a volume entitled Zeitstimmen was published in 1841. In 1842 he entered the service of Frederick William IV, the king of Prussia
Prussia
Prussia was a German kingdom and historic state originating out of the Duchy of Prussia and the Margraviate of Brandenburg. For centuries, the House of Hohenzollern ruled Prussia, successfully expanding its size by way of an unusually well-organized and effective army. Prussia shaped the history...
, with an annual stipend of 300 thaler
Thaler
The Thaler was a silver coin used throughout Europe for almost four hundred years. Its name lives on in various currencies as the dollar or tolar. Etymologically, "Thaler" is an abbreviation of "Joachimsthaler", a coin type from the city of Joachimsthal in Bohemia, where some of the first such...
s; under whom he produced König Roderich (1843), a tragedy, König Sigurds Brautfahrt (1846), an epic, and Juniuslieder (1848), lyrics in a more spirited and manlier style than his early poems.

In 1851 he was invited to Munich
Munich
Munich The city's motto is "" . Before 2006, it was "Weltstadt mit Herz" . Its native name, , is derived from the Old High German Munichen, meaning "by the monks' place". The city's name derives from the monks of the Benedictine order who founded the city; hence the monk depicted on the city's coat...
by Maximilian II of Bavaria
Maximilian II of Bavaria
Maximilian II of Bavaria was king of Bavaria from 1848 until 1864. He was son of Ludwig I of Bavaria and Therese of Saxe-Hildburghausen.-Crown Prince:...
as honorary professor at the university, and he relinquished his Prussian stipend. While in Munich he was at the center of the literary circle called Die Krokodile
Die Krokodile
Die Krokodile was a small poets' society in Munich which existed from 1856 to the 1870s.- Background and beginnings :King Ludwig I had constructed the Glyptothek and the Pinakothek to house art collections. Part of his intention was to attract intellectual luminaries to Munich, with little result...
(Crocodile Society), which was concerned with traditional forms. In 1852 he married Amanda Trummer and the next year they had a daughter, Ada Marie Caroline. A volume of Neue Gedichte, published at Munich in 1857, and principally consisting of poems on classical subjects, denoted a further considerable advance in his objectivity. The series was worthily closed by the Spätherbstblätter, published in 1877. He had left Munich in 1869 and returned to Lübeck, where he remained until his death.

His works further include two tragedies, Brunhild (1858, 5th ed. 1890), and Sophonisbe (1869), and translations of French and Spanish popular poetry. Beginning as a member of the group of political poets who heralded the revolution of 1848, Geibel was also the chief poet to welcome the establishment of the Empire in 1871
German Empire
The German Empire refers to Germany during the "Second Reich" period from the unification of Germany and proclamation of Wilhelm I as German Emperor on 18 January 1871, to 1918, when it became a federal republic after defeat in World War I and the abdication of the Emperor, Wilhelm II.The German...
. His strength lay not, however, in his political songs but in his purely lyric poetry, such as the fine cycle Ada and his popular love-songs. He may be regarded as the leading representative of German lyric poetry between 1848 and 1870.
The source of this article is wikipedia, the free encyclopedia.  The text of this article is licensed under the GFDL.