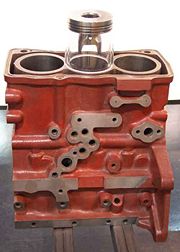 The Elsbett engine is a design of diesel engine
Diesel engine
A diesel engine is an internal combustion engine that uses the heat of compression to initiate ignition to burn the fuel, which is injected into the combustion chamber...
designed to run on vegetable oil. It's also known as Elko engine and was invented by Ludwig Elsbett
Ludwig Elsbett
Ludwig Elsbett was the inventor of the Elsbett Engine.Elsbett was one of nine children of the farmer Viktor Elsbett and his wife Maria. He grew up in agriculture, and was originally trained as a fitter for agricultural machinery...
.

The design limits the loss of energy as heat by a variety of technologies; using lube oil as coolant too, no water cooling of the engine block is required, though an oil cooler is needed. It had a 25% fuel efficiency advantage over contemporary designs in the 1980s. Several revolutionary improvements were achieved in this design, such as a new piston design and combustion process.

The technology was adopted by some companies in the former Soviet Union and a major project by Grupo Garavello, which went bankrupt by their other business activities, was undertaken in Brazil
Brazil
Brazil , officially the Federative Republic of Brazil , is the largest country in South America. It is the world's fifth largest country, both by geographical area and by population with over 192 million people...
. Although work continues on the dedicated multi-fuel Elsbett engine, the company now also sells conversion kits for existing diesel engines to run on vegetable oil.

Elsbett AG is based in Thalmaessing, Bavaria
Bavaria
Bavaria, formally the Free State of Bavaria is a state of Germany, located in the southeast of Germany. With an area of , it is the largest state by area, forming almost 20% of the total land area of Germany...
, Germany
Germany
Germany , officially the Federal Republic of Germany , is a federal parliamentary republic in Europe. The country consists of 16 states while the capital and largest city is Berlin. Germany covers an area of 357,021 km2 and has a largely temperate seasonal climate...
.