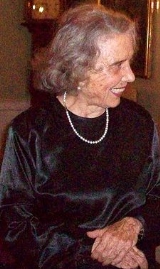 Encyclopedia
Elena Poniatowska is a Mexican
Mexico
The United Mexican States , commonly known as Mexico , is a federal constitutional republic in North America. It is bordered on the north by the United States; on the south and west by the Pacific Ocean; on the southeast by Guatemala, Belize, and the Caribbean Sea; and on the east by the Gulf of...
journalist and author. Her generation of writers include Carlos Fuentes‎, José Emilio Pacheco
José Emilio Pacheco
José Emilio Pacheco Berny is a Mexican essayist, novelist and short story writer. He is regarded as one of the major Mexican poets of the second half of the 20th century....
and Carlos Monsiváis
Carlos Monsiváis
Carlos Monsiváis Aceves was a Mexican writer, critic, political activist, and journalist. of French decent He also wrote political opinion columns in leading newspapers and was considered to be an opinion leader within the country's progressive sectors. His generation of writers includes Elena...
.

Poniatowska fled from France with her mother during the Second World War. The family settled in Mexico City
Mexico City
Mexico City is the Federal District , capital of Mexico and seat of the federal powers of the Mexican Union. It is a federal entity within Mexico which is not part of any one of the 31 Mexican states but belongs to the federation as a whole...
, where the young Elena and her sister Kitzia learned Spanish from an Indian servant. In 1943, Elena was sent to study to the United States. She returned to Mexico in 1953 and started her career as a journalist working for the newspaper Excélsior
Excélsior
Excélsior is a daily newspaper, founded by Rafael Alducin and published in Mexico City since 1917.During the 1950s and 1960s, the newspaper's editorial stance was of a relatively liberal bent, under the editorship of Julio Scherer...
.

She is best known for her 1971 work La noche de Tlatelolco (published in English as Massacre in Mexico), in which she relates her interviews with survivors and families of those who died in the 1968 Tlatelolco massacre
Tlatelolco massacre
The Tlatelolco massacre, also known as The Night of Tlatelolco , was a government massacre of student and civilian protesters and bystanders that took place during the afternoon and night of October 2, 1968, in the Plaza de las Tres Culturas in the Tlatelolco section of Mexico City...
in Mexico City. Since then she has published several works of fiction, testimonial literature, as well as book compilations of her interviews with writers, artists, and politicians. In recent years her prominence as a public intellectual and political figure in Mexico has increased.

Since 2005, Poniatowska has been an active supporter of Andrés Manuel López Obrador
Andrés Manuel López Obrador
Andrés Manuel López Obrador , also known as AMLO or El Peje, is a Mexican politician who held the position of Head of Government of the Federal District from 2000 to 2005, before resigning in July 2005 to contend the 2006 presidential election, representing the unsuccessful Coalition for the Good...
. In April 2006 she appeared in a series of television commercials denouncing the attempts of the other two major parties, particularly the National Action Party
National Action Party (Mexico)
The National Action Party , is one of the three main political parties in Mexico. The party's political platform is generally considered Centre-Right in the Mexican political spectrum. Since 2000, the President of Mexico has been a member of this party; both houses have PAN pluralities, but the...
, to link López Obrador to leftist
Left-wing politics
In politics, Left, left-wing and leftist generally refer to support for social change to create a more egalitarian society...
President Hugo Chávez
Hugo Chávez
Hugo Rafael Chávez Frías is the 56th and current President of Venezuela, having held that position since 1999. He was formerly the leader of the Fifth Republic Movement political party from its foundation in 1997 until 2007, when he became the leader of the United Socialist Party of Venezuela...
of Venezuela
Venezuela
Venezuela , officially called the Bolivarian Republic of Venezuela , is a tropical country on the northern coast of South America. It borders Colombia to the west, Guyana to the east, and Brazil to the south...
.

Her aunt was Mexican aristocrat and poet Guadalupe 'Pita' Amor
Pita Amor
Guadalupe Teresa Amor Schmidtlein , who wrote as Pita Amor, was a Mexican poet. She was born in Mexico City, the youngest child of a family with seven children, of mixed French, German and Spanish ancestry, a member of the Mexican aristocracy...
. Her sister lives abroad.