Encyclopedia
Electrode potential, E, in electrochemistry
Electrochemistry
Electrochemistry is a branch of chemistry that studies chemical reactions which take place in a solution at the interface of an electron conductor and an ionic conductor , and which involve electron transfer between the electrode and the electrolyte or species in solution.If a chemical reaction is...
, according to an IUPAC definition, is the electromotive force
Electromotive force
In physics, electromotive force, emf , or electromotance refers to voltage generated by a battery or by the magnetic force according to Faraday's Law, which states that a time varying magnetic field will induce an electric current.It is important to note that the electromotive "force" is not a...
of a cell
Galvanic cell
A Galvanic cell, or Voltaic cell, named after Luigi Galvani, or Alessandro Volta respectively, is an electrochemical cell that derives electrical energy from spontaneous redox reaction taking place within the cell...
built of two electrode
Electrode
An electrode is an electrical conductor used to make contact with a nonmetallic part of a circuit...
s:

From the above, for the cell with the standard hydrogen electrode (potential of 0 by convention), one obtains:

The left-right convention is consistent with the international agreement that redox potentials be given for reactions written in the form of reduction half-reactions.

Electrode potential is measured in volt
Volt
The volt is the SI derived unit for electric potential, electric potential difference, and electromotive force. The volt is named in honor of the Italian physicist Alessandro Volta , who invented the voltaic pile, possibly the first chemical battery.- Definition :A single volt is defined as the...
s (V). 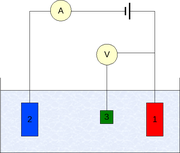 The measurement is generally conducted using a three-electrode setup (see the drawing):

In case of non-zero net current, it is essential to minimize the ohmic
Ohm's law
Ohm's law states that the current through a conductor between two points is directly proportional to the potential difference across the two points...
IR-drop in the electrolyte, e.g., by positioning the reference electrode near the surface of the working electrode (e.g., see Luggin capillary
Luggin capillary
A Luggin capillary is a small tube that is used in electrochemistry. The capillary defines a clear sensing point for the reference electrode near the working electrode. This is in contrast to the poorly-defined, large reference electrode.-External links:*...
), or by using an electrolyte of sufficiently high conductivity
Conductivity (electrolytic)
The conductivity of an electrolyte solution is a measure of its ability to conduct electricity. The SI unit of conductivity is siemens per meter ....
. The potential measurements are performed with the positive terminal of the electrometer
Electrometer
An electrometer is an electrical instrument for measuring electric charge or electrical potential difference. There are many different types, ranging from historical hand-made mechanical instruments to high-precision electronic devices...
connected to working electrode and the negative terminal to the reference electrode.


Potential difference of a cell assembled of two electrodes

Potential of a cell assembled of two electrodes can be determined from the two individual electrode potentials using: