Encyclopedia
Elaine of Astolat ˈæstɵlæt or Ascolat
Astolat
Astolat is a legendary city of Great Britain named in Arthurian legends. It is the home of Elaine, "the fair maiden of Astolat", and of her father Sir Bernard and her brothers Lavaine and Tirre. The city is called Shallott in many cultural references, derived from Alfred Lord Tennyson's poem "The...
is a figure in Arthurian legend who dies of her unrequited love for Lancelot
Lancelot
Sir Lancelot du Lac is one of the Knights of the Round Table in the Arthurian legend. He is the most trusted of King Arthur's knights and plays a part in many of Arthur's victories...
. Also referred to as Elaine the White and Elaine the Fair, she is the daughter of Bernard of Astolat. Versions of her story appear in Thomas Malory's
Thomas Malory
Sir Thomas Malory was an English writer, the author or compiler of Le Morte d'Arthur. The antiquary John Leland as well as John Bale believed him to be Welsh, but most modern scholars, beginning with G. L...
Le Morte d'Arthur
Le Morte d'Arthur
Le Morte d'Arthur is a compilation by Sir Thomas Malory of Romance tales about the legendary King Arthur, Guinevere, Lancelot, and the Knights of the Round Table...
and Alfred Tennyson's Idylls of the King
Idylls of the King
Idylls of the King, published between 1856 and 1885, is a cycle of twelve narrative poems by the English poet Alfred, Lord Tennyson which retells the legend of King Arthur, his knights, his love for Guinevere and her tragic betrayal of him, and the rise and fall of Arthur's kingdom...
. Elaine's story is also the inspiration for Tennyson's poem "The Lady of Shalott
The Lady of Shalott
"The Lady of Shalott" is a Victorian ballad by the English poet Alfred, Lord Tennyson . Like his other early poems – "Sir Lancelot and Queen Guinevere" and "Galahad" – the poem recasts Arthurian subject matter loosely based on medieval sources.-Overview:Tennyson wrote two versions of the poem, one...
". 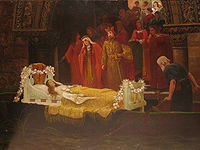 A version of the story appeared in the early 13th century Mort Artu
Lancelot-Grail
The Lancelot–Grail, also known as the Prose Lancelot, the Vulgate Cycle, or the Pseudo-Map Cycle, is a major source of Arthurian legend written in French. It is a series of five prose volumes that tell the story of the quest for the Holy Grail and the romance of Lancelot and Guinevere...
, in which the Demoiselle d’Escalot dies of unrequited love for Lancelot and drifts down a river to Camelot in a boat. Another version is told in the 13th century Italian novella La Donna di Scallota, which served as the source material for Tennyson's The Lady of Shalott.

Le Morte d'Arthur, Elaine's story begins when her father Bernard of Astolat organizes a jousting
Jousting
Jousting is a martial game or hastilude between two knights mounted on horses and using lances, often as part of a tournament.Jousting emerged in the High Middle Ages based on the military use of the lance by heavy cavalry. The first camels tournament was staged in 1066, but jousting itself did not...
tournament, attended by King Arthur
King Arthur
King Arthur is a legendary British leader of the late 5th and early 6th centuries, who, according to Medieval histories and romances, led the defence of Britain against Saxon invaders in the early 6th century. The details of Arthur's story are mainly composed of folklore and literary invention, and...
and his knights. While Lancelot
Lancelot
Sir Lancelot du Lac is one of the Knights of the Round Table in the Arthurian legend. He is the most trusted of King Arthur's knights and plays a part in many of Arthur's victories...
was not originally planning to attend, he is convinced otherwise and visits Bernard and his two sons before the tournament.

While Lancelot is in her family's household, Elaine becomes enamoured of him and begs him to wear her token at the coming tournament. Explaining that Guinevere
Guinevere
Guinevere was the legendary queen consort of King Arthur. In tales and folklore, she was said to have had a love affair with Arthur's chief knight Sir Lancelot...
would be at the tournament, he consents to wear the token but says that he will have to fight in disguise so as not to be recognised. He then asks Bernard if he can leave his recognizable shield with him and borrow another. Bernard agrees and lends him the plain-white shield of Torre, Elaine's brother.

Lancelot goes on to win the jousting tournament, still in disguise, fighting against King Arthur's party and beating forty of them in the tournament. He does, however, receive an injury to his side from Bors
Bors
Bors circa 540s-580s, is the name of two knights in the Arthurian legend, one the father and one the son. Bors the Elder is the King of Gaunnes or Gaul during the early period of King Arthur's reign, and is the brother of King Ban of Benoic. Gaunnes is the Fredemundian dynastic kingdom of Neustria...
' lance, and is carried off the field by Lavaine to the hermit Sir Baudwin's cave (Baudwin being a former knight of the Round Table himself). Elaine then urges her father to let her bring the wounded Lancelot to her chambers, where she nurses him. When Lancelot is well, he makes ready to leave, and offers to pay Elaine for her services; insulted, Elaine brings him his shield, which she had been guarding, and a wary Lancelot leaves the castle, never to return but now aware of her feelings for him.

Ten days later, Elaine dies of heartbreak. Per her instructions, her body is placed in a small boat, clutching a lily in one hand, and her final letter in the other. She then floats down the Thames to Camelot
Camelot
Camelot is a castle and court associated with the legendary King Arthur. Absent in the early Arthurian material, Camelot first appeared in 12th-century French romances and eventually came to be described as the fantastic capital of Arthur's realm and a symbol of the Arthurian world...
, where she is discovered by King Arthur's court. Lancelot is summoned and hears the contents of the letter, after which he explains what had happened. Lancelot proceeds to pay for a rich funeral and Elaine's mass-penny
Mass-penny
Mass-penny is a Mass offering by the faithful. This is usually done at the altar rail as an offertory to contribute to the purchase of the wine, bread and candles used in the Mass. The term is Anglo-Saxon in origin and was in use for more than three hundred years up to the fifteenth century....
, which was requested by her.

Elaine has captured the minds of many artists, becoming one of the most recognizable tertiary characters from the Arthurian legends. A brief list of those who have depicted her story in art would include: