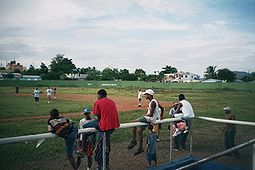 The following is a sortable table of the municipalities with population figures as of an estimate on the 2010 census. Urban
Urban area
An urban area is characterized by higher population density and vast human features in comparison to areas surrounding it. Urban areas may be cities, towns or conurbations, but the term is not commonly extended to rural settlements such as villages and hamlets.Urban areas are created and further...
population are those living in the seats (cabeceras literally heads) of municipalities or of municipal districts. Rural
Rural
Rural areas or the country or countryside are areas that are not urbanized, though when large areas are described, country towns and smaller cities will be included. They have a low population density, and typically much of the land is devoted to agriculture...
population are those living in the district
District
Districts are a type of administrative division, in some countries managed by a local government. They vary greatly in size, spanning entire regions or counties, several municipalities, or subdivisions of municipalities.-Austria:...
s (Secciones literally sections) and neighborhoods (Parajes literally places) outside of them.
For comparison with the municipalities and municipal districts of other provinces see the list of municipalities and municipal districts of the Dominican Republic.

Oficina Nacional de Estadística, Statistics Portal of the Dominican Republic Oficina Nacional de Estadística, Maps with administrative division of the provinces of the Dominican Republic, downloadable in PDF
Portable Document Format
Portable Document Format is an open standard for document exchange. This file format, created by Adobe Systems in 1993, is used for representing documents in a manner independent of application software, hardware, and operating systems....
format
The source of this article is wikipedia, the free encyclopedia.  The text of this article is licensed under the GFDL.