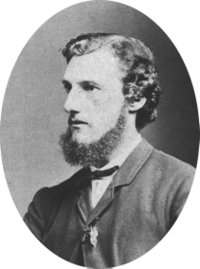 Edward Pierson Ramsay was an Australia
Australia
Australia , officially the Commonwealth of Australia, is a country in the Southern Hemisphere comprising the mainland of the Australian continent, the island of Tasmania, and numerous smaller islands in the Indian and Pacific Oceans. It is the world's sixth-largest country by total area...
n zoologist who specialised in ornithology
Ornithology
Ornithology is a branch of zoology that concerns the study of birds. Several aspects of ornithology differ from related disciplines, due partly to the high visibility and the aesthetic appeal of birds...
.

Pierson was born in Dobroyd Estate, Long Cove, Sydney
Sydney
Sydney is the most populous city in Australia and the state capital of New South Wales. Sydney is located on Australia's south-east coast of the Tasman Sea. As of June 2010, the greater metropolitan area had an approximate population of 4.6 million people...
and educated at St Mark's Collegiate School, The King's School, Parramatta
The King's School, Sydney
The King's School is an independent Anglican, day and boarding school for boys in North Parramatta in the western suburbs of Sydney, Australia. Founded in 1831, it is Australia's oldest school and forms one of the nine "Great Public Schools" of New South Wales. Situated within a site, Gowan Brae,...
. He studied medicine
Medicine
Medicine is the science and art of healing. It encompasses a variety of health care practices evolved to maintain and restore health by the prevention and treatment of illness....
from 1863 to 1865 at the University of Sydney
University of Sydney
The University of Sydney is a public university located in Sydney, New South Wales. The main campus spreads across the suburbs of Camperdown and Darlington on the southwestern outskirts of the Sydney CBD. Founded in 1850, it is the oldest university in Australia and Oceania...
but did not graduate.

In 1868 Ramsay joined with his brothers in a sugar-growing plantation in Queensland
Queensland
Queensland is a state of Australia, occupying the north-eastern section of the mainland continent. It is bordered by the Northern Territory, South Australia and New South Wales to the west, south-west and south respectively. To the east, Queensland is bordered by the Coral Sea and Pacific Ocean...
which, however, was not successful. Ramsay was one of the foundation members of the Linnean Society of New South Wales
Linnean Society of New South Wales
The Linnean Society of New South Wales promotes the Cultivation and Study of the Science of Natural History in all its Branches and was founded in Sydney, New South Wales in 1874 and incorporated in 1884. It succeeded the Entomological Society of New South Wales, founded in 1862 and folded in...
when it was formed in 1874, and a member of its council from the beginning until 1892. He became the first Australian-born Curator of the Australian Museum
Australian Museum
The Australian Museum is the oldest museum in Australia, with an international reputation in the fields of natural history and anthropology. It features collections of vertebrate and invertebrate zoology, as well as mineralogy, palaeontology, and anthropology...
and built up a large variety of native weapons, dresses, utensils and ornaments illustrating the ethnology of Polynesia
Polynesia
Polynesia is a subregion of Oceania, made up of over 1,000 islands scattered over the central and southern Pacific Ocean. The indigenous people who inhabit the islands of Polynesia are termed Polynesians and they share many similar traits including language, culture and beliefs...
and Australia
Australia
Australia , officially the Commonwealth of Australia, is a country in the Southern Hemisphere comprising the mainland of the Australian continent, the island of Tasmania, and numerous smaller islands in the Indian and Pacific Oceans. It is the world's sixth-largest country by total area...
. From 1876 until 1894, when he had to resign due to his declining health, he published a Catalogue of the Australian Birds in the Australian Museum at Sydney in four parts.

In 1883 Ramsay traveled to London
London
London is the capital city of :England and the :United Kingdom, the largest metropolitan area in the United Kingdom, and the largest urban zone in the European Union by most measures. Located on the River Thames, London has been a major settlement for two millennia, its history going back to its...
to attend the International Fisheries Exhibition. At that time he met Military Surgeon Francis Day
Francis Day
Francis Day CIE was Inspector-General of Fisheries in India and Burma and an ichthyologist.He was born on 2 March 1829 Maresfield, Sussex, UK third son of William and Ann Day. He became the medical officer in the Madras Presidency, East India Company services in 1852.Francis Day was created a...
who had collected fishes over several decades in India, Burma, Malaysia and other areas in southern Asia. Ramsay negotiated purchase a portion of Day's collection, including about 150 of Day's type specimens.

After his resignation as Curator, Ramsay served the Australian Museum as "consulting ornithologist" until 1909. He died on 16 December 1916 in Sydney.