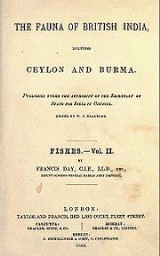 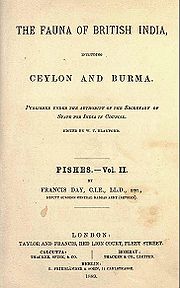 Francis Day CIE
Order of the Indian Empire
The Most Eminent Order of the Indian Empire is an order of chivalry founded by Queen Victoria in 1878. The Order includes members of three classes:#Knight Grand Commander #Knight Commander #Companion...
(1829–1889) was Inspector-General of Fisheries in India
India
India , officially the Republic of India , is a country in South Asia. It is the seventh-largest country by geographical area, the second-most populous country with over 1.2 billion people, and the most populous democracy in the world...
(from circa 1871) and Burma and an ichthyologist.

Day wrote a monograph
Monograph
A monograph is a work of writing upon a single subject, usually by a single author.It is often a scholarly essay or learned treatise, and may be released in the manner of a book or journal article. It is by definition a single document that forms a complete text in itself...
on fishes between 1875–1878 "The Fishes of India" with a supplement in 1888 and two volumes on "Fishes" in The Fauna of British India, Including Ceylon and Burma series in which he described over 1400 species. He also wrote British and Irish Salmonadae, which he illustrated with 9 plates, the colouring of which was done by Miss Florence Woolward. Francis Day was granted an honorary LLD by the University of Edinburgh.

Although considered an expert on the fishes of India, Albert Günther found many of Day's observations questionable.

He died at his residence, Kenilworth House, Cheltenham on 10 July 1889 of cancer of the stomach and was buried at Cheltenham cemetery.