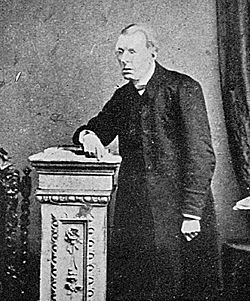 The Reverend Edward Hincks (August 19, 1792 – December 3, 1866) was an Irish
Ireland
Ireland is an island to the northwest of continental Europe. It is the third-largest island in Europe and the twentieth-largest island on Earth...
clergyman, best remembered as an Assyriologist and one of the decipherers of Mesopotamian cuneiform
Cuneiform
Cuneiform can refer to:*Cuneiform script, an ancient writing system originating in Mesopotamia in the 4th millennium BC*Cuneiform , three bones in the human foot*Cuneiform Records, a music record label...
.

Edward Hincks was born in Cork
County Cork
County Cork is a county in Ireland. It is located in the South-West Region and is also part of the province of Munster. It is named after the city of Cork . Cork County Council is the local authority for the county...
on 19 August 1792. He was the eldest son of Thomas Dix Hincks
Thomas Dix Hincks
Thomas Dix Hincks was an Irish orientalist and naturalist.Hincks was educated at Trinity College, Dublin. He was ordained a Presbysterian minister and worked at the Old Presbyterian Church on Princes Street in Cork. After teaching in the Cork Institution, which he founded, he taught in Fermoy,...
a distinguished Protestant minister, orientalist and naturalist. He was also the brother of Francis Hincks
Francis Hincks
Sir Francis Hincks, KCMG, PC was a Canadian politician.Born in Cork, Ireland, he was the son of Thomas Dix Hincks an orientalist, naturalist and Presbyterian minister and the brother of Edward Hincks orientalist, naturalist and clergyman.He moved to York in 1832 and set up an importing business...
a Canadian politician. Hincks was educated at home by his father and later at Trinity College, Dublin
Trinity College, Dublin
Trinity College, Dublin , formally known as the College of the Holy and Undivided Trinity of Queen Elizabeth near Dublin, was founded in 1592 by letters patent from Queen Elizabeth I as the "mother of a university", Extracts from Letters Patent of Elizabeth I, 1592: "...we...found and...
, graduating in 1811 at the age of 19. In 1825, after taking orders in the Church of Ireland
Church of Ireland
The Church of Ireland is an autonomous province of the Anglican Communion. The church operates in all parts of Ireland and is the second largest religious body on the island after the Roman Catholic Church...
, he was appointed rector of Killyleagh in County Down
County Down
-Cities:*Belfast *Newry -Large towns:*Dundonald*Newtownards*Bangor-Medium towns:...
, an office he was to hold for the remaining forty-one years of his life.

The undemanding nature of his clerical duties left him with more than enough time to pursue his interest in ancient languages. His first love was for the hieroglyphic writing of ancient Egypt
Egypt
Egypt , officially the Arab Republic of Egypt, Arabic: , is a country mainly in North Africa, with the Sinai Peninsula forming a land bridge in Southwest Asia. Egypt is thus a transcontinental country, and a major power in Africa, the Mediterranean Basin, the Middle East and the Muslim world...
. By 1823 the Frenchman Jean-Francois Champollion
Jean-François Champollion
Jean-François Champollion was a French classical scholar, philologist and orientalist, decipherer of the Egyptian hieroglyphs....
had succeeded in deciphering this enigmatic script, but Hincks made a number of discoveries of his own which established him as an authority of ancient philology.

In the 1830s he turned his attention to Old Persian cuneiform
Cuneiform script
Cuneiform script )) is one of the earliest known forms of written expression. Emerging in Sumer around the 30th century BC, with predecessors reaching into the late 4th millennium , cuneiform writing began as a system of pictographs...
, a form of writing that the emperors of Persia had used for monumental inscriptions in their own language. Working independently of the leading Orientalist of the day Sir Henry Creswicke Rawlinson, Hincks deduced the essentially syllabic nature of this script and correctly deduced the values of the Persian vowels.

Hincks’ greatest achievement was the decipherment of the ancient language and writing of Babylon
Babylon
Babylon was an Akkadian city-state of ancient Mesopotamia, the remains of which are found in present-day Al Hillah, Babil Province, Iraq, about 85 kilometers south of Baghdad...
and Assyria
Assyria
Assyria was a Semitic Akkadian kingdom, extant as a nation state from the mid–23rd century BC to 608 BC centred on the Upper Tigris river, in northern Mesopotamia , that came to rule regional empires a number of times through history. It was named for its original capital, the ancient city of Assur...
: Akkadian
Akkadian language
Akkadian is an extinct Semitic language that was spoken in ancient Mesopotamia. The earliest attested Semitic language, it used the cuneiform writing system derived ultimately from ancient Sumerian, an unrelated language isolate...
cuneiform. But his attention might never have been drawn to the relatively new topic of Assyriology had it not been for a lucky find during 1842.

During that year the archaeologist Paul Émile Botta uncovered the remains of the ancient city of Niniveh, the capital of the Assyrian Empire. Among the treasures unearthed by Botta and his successors, including Austen Henry Layard
Austen Henry Layard
Sir Austen Henry Layard GCB, PC was a British traveller, archaeologist, cuneiformist, art historian, draughtsman, collector, author, politician and diplomat, best known as the excavator of Nimrud.-Family:...
,with whom Hincks exchanged many letters, was the famous library of Assurbanipal, a royal archive containing tens of thousands of baked clay tablets. These tablets were inscribed in a strange illegible form of writing known as cuneiform. Three men were to play a decisive role in the decipherment of this script: Hincks, Rawlinson and a young German-born scholar called Jules Oppert.

Hincks deduced correctly that cuneiform writing had been invented by one of the earliest civilizations of Mesopotamia (a people later identified by Oppert as the Sumerians), who then bequeathed it to later states such as Babylon, Assyria and Elam
Elam
Elam was an ancient civilization located in what is now southwest Iran. Elam was centered in the far west and the southwest of modern-day Iran, stretching from the lowlands of Khuzestan and Ilam Province, as well as a small part of southern Iraq...
.

By 1850 Hincks had come to a number of important conclusions regarding the nature of Assyro-Babylonian cuneiform. He believed that the script was essentially syllabic, comprising open syllables (e.g. "ab" or "ki") as well as more complex closed syllables (e.g. "mur"). He also discovered that cuneiform characters were "polyphonic," by which he meant that a single sign could have several different readings depending on the context in which it occurred.

By now Hincks had recognized a large number of determinative
Determinative
A determinative, also known as a taxogram or semagram, is an ideogram used to mark semantic categories of words in logographic scripts which helps to disambiguate interpretation. They have no direct counterpart in spoken language, though they may derive historically from glyphs for real words, and...
s and had correctly established their readings. But not everyone was convinced by the claims being made by the Irishman and his distinguished colleagues. Some philologists even suggested that they were simply inventing multiple readings of the signs to suit their own translations.

In 1857 the versatile English Orientalist William Henry Fox Talbot suggested that an undeciphered cuneiform text be given to several different Assyriologists to translate. If, working independently of one another, they came up with reasonably similar translations; it would surely dispel the doubts surrounding their claims.

As it happened, Talbot and the "holy trinity of cuneiform", - Hincks, Rawlinson and Oppert, were in London in 1857. Edwin Norris
Edwin Norris
Edwin Norris was a British philologist, linguist and intrepid orientalist who wrote or compiled numerous works on the languages of Asia and Africa; his best-known works are his uncompleted Assyrian Dictionary and his translation and annotation of the three plays of the Cornish Ordinalia.He was...
, secretary of the Royal Asiatic Society
Royal Asiatic Society
The Royal Asiatic Society of Great Britain and Ireland was established, according to its Royal Charter of 11 August 1824, to further "the investigation of subjects connected with and for the encouragement of science, literature and the arts in relation to Asia." From its incorporation the Society...
, gave each of them a copy of a recently discovered inscription from the reign of the Assyrian emperor Tiglath-Pileser I
Tiglath-Pileser I
Tiglath-Pileser I was a king of Assyria during the Middle Assyrian period . According to Georges Roux, Tiglath-Pileser was "one of the two or three great Assyrian monarchs since the days of Shamshi-Adad I"...
. A jury of experts was empanelled to examine the resulting translations and assess their accuracy.

In all essential points the translations produced by the four scholars were found to be in close agreement with one another. There were of course some slight discrepancies. The inexperienced Talbot had made a number of mistakes, and Oppert’s translation contained a few doubtful passages due to his unfamiliarity with the English language. But Hincks’ and Rawlinson’s versions were virtually identical. The jury declared itself satisfied, and the decipherment of cuneiform was adjudged a fait accompli.

The Reverend Edward Hincks devoted the remaining years of his life to the study of cuneiform and made further significant contributions to its decipherment. He died at his rectory in Killyleagh on 3 December 1866 at the age of 74. He was survived by a wife and four daughters.