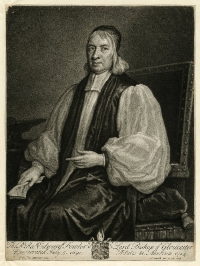 Fower was suspected of Pelagian
Pelagianism
Pelagianism is a theological theory named after Pelagius , although he denied, at least at some point in his life, many of the doctrines associated with his name. It is the belief that original sin did not taint human nature and that mortal will is still capable of choosing good or evil without...
tendencies, and his earliest book was a Free Discourse in defence of The Practices of Certain Moderate Divines called Latitudinarians (1670). This supported Samuel Parker and his Discourse of Ecclesiastical Polity of 1669. It also took aim at Thomas Hobbes
Thomas Hobbes
Thomas Hobbes of Malmesbury , in some older texts Thomas Hobbs of Malmsbury, was an English philosopher, best known today for his work on political philosophy...
, by means of positions set out by Daniel Scargill, an apostate Hobbist.

The Design of Christianity, published in the following year, in which he laid stress on the moral design of revelation, was criticized by Richard Baxter
Richard Baxter
Richard Baxter was an English Puritan church leader, poet, hymn-writer, theologian, and controversialist. Dean Stanley called him "the chief of English Protestant Schoolmen". After some false starts, he made his reputation by his ministry at Kidderminster, and at around the same time began a long...
in his How far Holiness is the Design of Christianity (1671) and by John Bunyan
John Bunyan
John Bunyan was an English Christian writer and preacher, famous for writing The Pilgrim's Progress. Though he was a Reformed Baptist, in the Church of England he is remembered with a Lesser Festival on 30 August, and on the liturgical calendar of the Episcopal Church on 29 August.-Life:In 1628,...
in his Defence of the Doctrine of Justification by Faith (1672). Bunyan described the Design as "a mixture of Popery, Socinianism and Quakerism," an accusation to which Fowler replied in a scurrilous pamphlet entitled Dirt Wip'd Off. He also published, in 1693, Twenty-Eight Propositions, by which the Doctrine of the Trinity is endeavoured to be explained, challenging with some success the Socinian
Socinianism
Socinianism is a system of Christian doctrine named for Fausto Sozzini , which was developed among the Polish Brethren in the Minor Reformed Church of Poland during the 15th and 16th centuries and embraced also by the Unitarian Church of Transylvania during the same period...
position.

He was successively rector of Norhill, Bedfordshire
Bedfordshire
Bedfordshire is a ceremonial county of historic origin in England that forms part of the East of England region.It borders Cambridgeshire to the north-east, Northamptonshire to the north, Buckinghamshire to the west and Hertfordshire to the south-east....
(1656) and of All Hallows, Bread Street, London (1673), and in 1676 was elected a canon of Gloucester; his friend, Henry More
Henry More
Henry More FRS was an English philosopher of the Cambridge Platonist school.-Biography:Henry was born at Grantham and was schooled at The King's School, Grantham and at Eton College...
, one of the Cambridge Platonists
Cambridge Platonists
The Cambridge Platonists were a group of philosophers at Cambridge University in the middle of the 17th century .- Programme :...
, resigned in his favour. In 1681 he became vicar of St Giles, Cripplegate, but after four years was suspended for being a Whig
British Whig Party
The Whigs were a party in the Parliament of England, Parliament of Great Britain, and Parliament of the United Kingdom, who contested power with the rival Tories from the 1680s to the 1850s. The Whigs' origin lay in constitutional monarchism and opposition to absolute rule...
. When the Declaration of Indulgence
Declaration of Indulgence
The Declaration of Indulgence was two proclamations made by James II of England and VII of Scotland in 1687. The Indulgence was first issued for Scotland on 12 February, and then for England on 4 April 1687...
was published in 1687 he successfully influenced the London clergy against reading it.