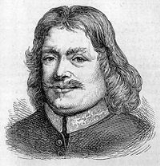 Overview
John Bunyan was an English Christian writer and preacher, famous for writing The Pilgrim's Progress
The Pilgrim's Progress
The Pilgrim's Progress from This World to That Which Is to Come is a Christian allegory written by John Bunyan and published in February, 1678. It is regarded as one of the most significant works of religious English literature, has been translated into more than 200 languages, and has never been...
. Though he was a Reformed Baptist
Reformed Baptist
Reformed Baptists are Baptists that hold to a Calvinist soteriology. They can trace their history through the early modern Particular Baptists of England. The first Reformed Baptist church was formed in the 1630s...
, in the Church of England
Church of England
The Church of England is the officially established Christian church in England and the Mother Church of the worldwide Anglican Communion. The church considers itself within the tradition of Western Christianity and dates its formal establishment principally to the mission to England by St...
he is remembered with a Lesser Festival
Lesser Festival
Lesser Festivals are a type of observance in the Church of England, considered to be less significant than a Principal Feast, Principal Holy Day, or Festival, but more significant than a Commemoration. Whereas Principal Feasts must be celebrated, it is not obligatory to observe Lesser Festivals...
on 30 August, and on the liturgical calendar of the Episcopal Church (US)
Calendar of saints (Episcopal Church in the United States of America)
The veneration of saints in the Episcopal Church is a continuation of an ancient tradition from the early Church which honors important people of the Christian faith. The usage of the term "saint" is similar to Roman Catholic and Orthodox traditions. Those in the Anglo-Catholic tradition may...
on 29 August.

He is recorded in the Elstow parish register as having been baptised John Bunyan, on 30 November 1628.

On 23 May 1627, Thomas married his first wife, Margaret Bentley.

"Apology for his Book".

The name of the slough was Despond.

Every fat must stand upon his bottom.

Part i. Compare: "Every tub must stand upon its bottom", Charles Macklin, The Man of the World, act i. sc. 2.

It beareth the name of Vanity Fair, because the town where 't is kept is lighter than vanity.

They came to the Delectable Mountains.

Some things are of that nature as to make One's fancy chuckle, while his heart doth ache.

The Author's Way of sending forth his Second Part of the Pilgrim.
More
x