Encyclopedia
East Franconian is a dialect which is spoken in northern Bavaria
Bavaria
Bavaria, formally the Free State of Bavaria is a state of Germany, located in the southeast of Germany. With an area of , it is the largest state by area, forming almost 20% of the total land area of Germany...
and other areas in Germany
Germany
Germany , officially the Federal Republic of Germany , is a federal parliamentary republic in Europe. The country consists of 16 states while the capital and largest city is Berlin. Germany covers an area of 357,021 km2 and has a largely temperate seasonal climate...
around Nuremberg
Nuremberg
Nuremberg[p] is a city in the German state of Bavaria, in the administrative region of Middle Franconia. Situated on the Pegnitz river and the Rhine–Main–Danube Canal, it is located about north of Munich and is Franconia's largest city. The population is 505,664...
, Bamberg
Bamberg
Bamberg is a city in Bavaria, Germany. It is located in Upper Franconia on the river Regnitz, close to its confluence with the river Main. Bamberg is one of the few cities in Germany that was not destroyed by World War II bombings because of a nearby Artillery Factory that prevented planes from...
, Coburg
Coburg
Coburg is a town located on the Itz River in Bavaria, Germany. Its 2005 population was 42,015. Long one of the Thuringian states of the Wettin line, it joined with Bavaria by popular vote in 1920...
, Würzburg
Würzburg
Würzburg is a city in the region of Franconia which lies in the northern tip of Bavaria, Germany. Located at the Main River, it is the capital of the Regierungsbezirk Lower Franconia. The regional dialect is Franconian....
, Hof, Bayreuth, Bad Mergentheim
Bad Mergentheim
Bad Mergentheim is a town in the Main-Tauber district in the German state of Baden-Württemberg.-History:Mergentheim is mentioned in chronicles as early as 1058, as the residence of the family of the counts of Hohenlohe, who early in the 13th century assigned the greater part of their estates in...
, Crailsheim
Crailsheim
Crailsheim is a town in the German state of Baden-Württemberg, 32 km east of Schwäbisch Hall, 40 km southwest of Ansbach in the Schwäbisch Hall district, incorporated in 1338....
and Suhl
Suhl
- Geography :Suhl sits on the south edge of the Suhler Scholle, an upthrust granite complex that is streaked by numerous dikes. This is part of the Ruhla-Schleusingen Horst that defines the southwest side of the Thuringian Forest...
. The major subgroups are Unterostfränkisch (spoken in Lower Franconia and southern Thuringia), Oberostfränkisch (spoken in Upper and Middle Franconia) and Südostfränkisch (spoken in some parts of Middle Franconia and Hohenlohe). The Vogtländisch
Vogtländisch
Vogtländisch is an East-Franconian dialect, spoken in Vogtland.- Distribution and history :Vogtländisch is mainly spoken in rural and small town areas...
and Erzgebirgisch
Erzgebirgisch
Erzgebirgisch is an Upper German dialect, probably belonging to the Franconian dialect group, spoken mainly in the central Erzgebirge . It has received relatively little academic attention...
dialects spoken in western Saxony
Saxony
The Free State of Saxony is a landlocked state of Germany, contingent with Brandenburg, Saxony Anhalt, Thuringia, Bavaria, the Czech Republic and Poland. It is the tenth-largest German state in area, with of Germany's sixteen states....
(Vogtland
Vogtland
The term Vogtland refers to a region reaching across the German free states of Bavaria, Saxony and Thuringia and into the Czech Republic . The name of the region contains a reference to the former leadership by the Vögte of Weida, Gera and Plauen, which translates approximately to advocates or lord...
and Ore Mountains region) around Plauen
Plauen
Plauen is a town in the Free State of Saxony, east-central Germany.It is the capital of the Vogtlandkreis. The town is situated near the border of Bavaria and the Czech Republic.Plauen's slogan is Plauen - echt Spitze.-History:...
segue into Upper Saxon German
Upper Saxon German
Upper Saxon is a Central German dialect spoken in much of the modern German states of Saxony and Thuringia. Contrary to its name it is not a descendant of Old Saxon. The degree of accent varies from place to place within the states, with it being anywhere from a relatively mild accent in the...
. The language roughly overlaps with Franconia
Franconia
Franconia is a region of Germany comprising the northern parts of the modern state of Bavaria, a small part of southern Thuringia, and a region in northeastern Baden-Württemberg called Tauberfranken...
and southern Thuringia
Thuringia
The Free State of Thuringia is a state of Germany, located in the central part of the country.It has an area of and 2.29 million inhabitants, making it the sixth smallest by area and the fifth smallest by population of Germany's sixteen states....
, being a transitional dialect. 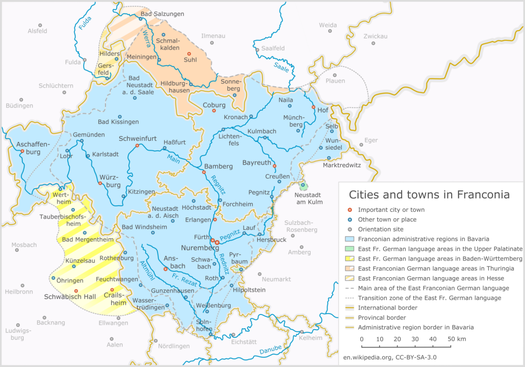 In the transitional area between Rhine Franconian
Rhine Franconian
Rhine Franconian , or Rhenish Franconian, is a dialect family of West Central German. It comprises the German dialects spoken across the western regions of the states of Saarland, Rhineland-Palatinate, and Hesse in Germany...
in the northwest and the Austro-Bavarian
Austro-Bavarian
Bavarian , also Austro-Bavarian, is a major group of Upper German varieties spoken in the south east of the German language area.-History and origin:...
dialects in the southeast, East Franconian has elements of Central German
Central German
Central German is a group of High German dialects spoken from the Rhineland in the west to the former eastern territories of Germany.-History:...
and Upper German
Upper German
Upper German is a family of High German dialects spoken primarily in southern Germany, Austria, Switzerland and Northern Italy.-Family tree:Upper German can be generally classified as Alemannic or Austro-Bavarian...
. The same goes only for South Franconian German
South Franconian German
South Franconian is a dialect which is spoken in the northern Baden region in Germany around Karlsruhe, Pforzheim and Rastatt....
in adjacent Baden-Württemberg
Baden-Württemberg
Baden-Württemberg is one of the 16 states of Germany. Baden-Württemberg is in the southwestern part of the country to the east of the Upper Rhine, and is the third largest in both area and population of Germany's sixteen states, with an area of and 10.7 million inhabitants...
. East Franconian is one of the German dialects with the highest number of speakers.