Dyeing is the process of adding color to textile
Textile
A textile or cloth is a flexible woven material consisting of a network of natural or artificial fibres often referred to as thread or yarn. Yarn is produced by spinning raw fibres of wool, flax, cotton, or other material to produce long strands...
products like fiber
Fiber
Fiber is a class of materials that are continuous filaments or are in discrete elongated pieces, similar to lengths of thread.They are very important in the biology of both plants and animals, for holding tissues together....
s, yarn
Yarn
Yarn is a long continuous length of interlocked fibres, suitable for use in the production of textiles, sewing, crocheting, knitting, weaving, embroidery and ropemaking. Thread is a type of yarn intended for sewing by hand or machine. Modern manufactured sewing threads may be finished with wax or...
s, and fabric
Fabric
A fabric is a textile material, short for "textile fabric".Fabric may also refer to:*Fabric , the spatial and geometric configuration of elements within a rock*Fabric , a nightclub in London, England...
s. Dyeing is normally done in a special solution
Solution
In chemistry, a solution is a homogeneous mixture composed of only one phase. In such a mixture, a solute is dissolved in another substance, known as a solvent. The solvent does the dissolving.- Types of solutions :...
containing dye
Dye
A dye is a colored substance that has an affinity to the substrate to which it is being applied. The dye is generally applied in an aqueous solution, and requires a mordant to improve the fastness of the dye on the fiber....
s and particular chemical material
Material
Material is anything made of matter, constituted of one or more substances. Wood, cement, hydrogen, air and water are all examples of materials. Sometimes the term "material" is used more narrowly to refer to substances or components with certain physical properties that are used as inputs to...
. After dyeing, dye molecules have uncut Chemical bond
Chemical bond
A chemical bond is an attraction between atoms that allows the formation of chemical substances that contain two or more atoms. The bond is caused by the electromagnetic force attraction between opposite charges, either between electrons and nuclei, or as the result of a dipole attraction...
with fiber molecules. The temperature
Temperature
Temperature is a physical property of matter that quantitatively expresses the common notions of hot and cold. Objects of low temperature are cold, while various degrees of higher temperatures are referred to as warm or hot...
and time controlling are two key factors in dyeing. There are mainly two classes of dye, natural and man-made.
For most of the thousands of years in which dyeing has been used by humans to decorate clothing
Clothing
Clothing refers to any covering for the human body that is worn. The wearing of clothing is exclusively a human characteristic and is a feature of nearly all human societies...
, or fabrics for other uses, the primary source of dye has been nature
Nature
Nature, in the broadest sense, is equivalent to the natural world, physical world, or material world. "Nature" refers to the phenomena of the physical world, and also to life in general...
, with the dyes being extracted from animal
Animal
Animals are a major group of multicellular, eukaryotic organisms of the kingdom Animalia or Metazoa. Their body plan eventually becomes fixed as they develop, although some undergo a process of metamorphosis later on in their life. Most animals are motile, meaning they can move spontaneously and...
s or plant
Plant
Plants are living organisms belonging to the kingdom Plantae. Precise definitions of the kingdom vary, but as the term is used here, plants include familiar organisms such as trees, flowers, herbs, bushes, grasses, vines, ferns, mosses, and green algae. The group is also called green plants or...
s. In the last 150 years, humans have produced artificial dyes to achieve a broader range of colors, and to render the dyes more stable to resist washing and general use. Different classes of dyes are used for different types of fiber and at different stages of the textile production process, from loose fibers through yarn and cloth to completed garments. 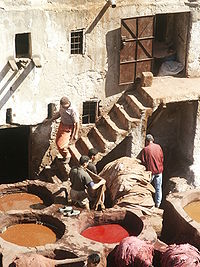 Dyes are applied to textile goods by dyeing from dye solutions and by printing from dye pastes.

The term "direct dye application" stems from some dyestuff having to be either fermented as in the case of some natural dye or chemically reduced
Redox
Redox reactions describe all chemical reactions in which atoms have their oxidation state changed....
as in the case of synthetic vat and sulfur dyes before being applied. This renders the dye soluble so that it can be absorbed by the fiber since the insoluble dye has very little substantivity to the fiber. Direct dyes, a class of dyes largely for dyeing cotton, are water soluble and can be applied directly to the fiber from an aqueous solution. Most other classes of synthetic dye, other than vat and surface dyes, are also applied in this way.

The term may also be applied to dyeing without the use of mordant
Mordant
A mordant is a substance used to set dyes on fabrics or tissue sections by forming a coordination complex with the dye which then attaches to the fabric or tissue. It may be used for dyeing fabrics, or for intensifying stains in cell or tissue preparations. The term mordant comes from the Latin...
s to fix the dye once it is applied. Mordants were often required to alter the hue and intensity of natural dyes and improve their color fastness. Chromium
Chromium
Chromium is a chemical element which has the symbol Cr and atomic number 24. It is the first element in Group 6. It is a steely-gray, lustrous, hard metal that takes a high polish and has a high melting point. It is also odorless, tasteless, and malleable...
salts were until recently extensively used in dying wool with synthetic mordant dyes. These were used for economical high color fastness dark shades such as black and navy
Navy blue
Navy blue is a very dark shade of the color blue which almost appears as black. Navy blue got its name from the dark blue worn by officers in the British Royal Navy since 1748 and subsequently adopted by other navies around the world....
. Environmental concern has now restricted their use, and they have been replaced with reactive and metal complex dyes which need no mordant.

The common dyeing process of cotton yarn with reactive dyes at package form is as follows:

After this process, the dyed yarn packages are packed and delivered.

If things go wrong in the dyeing process, the dyer may be forced to remove the dye already applied by a process that is normally known as stripping. This normally means destroying the dye with powerful reducing agents (sodium hydrosulphite) or oxidizing agents (hydrogen peroxide or sodium hypochlorite). The process often risks damaging the substrate (fiber). Where possible, it is often less risky to dye the material a darker shade, with black often being the easiest or last option.