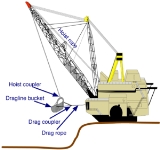 Overview
A dragline excavator is a piece of heavy equipment used in civil engineering
Civil engineering
Civil engineering is a professional engineering discipline that deals with the design, construction, and maintenance of the physical and naturally built environment, including works like roads, bridges, canals, dams, and buildings...
and surface mining
Mining
Mining is the extraction of valuable minerals or other geological materials from the earth, from an ore body, vein or seam. The term also includes the removal of soil. Materials recovered by mining include base metals, precious metals, iron, uranium, coal, diamonds, limestone, oil shale, rock...
.

In civil engineering
Civil engineering
Civil engineering is a professional engineering discipline that deals with the design, construction, and maintenance of the physical and naturally built environment, including works like roads, bridges, canals, dams, and buildings...
the smaller types are used for road, port construction, and as pile
Deep foundation
A deep foundation is a type of foundation distinguished from shallow foundations by the depth they are embedded into the ground. There are many reasons a geotechnical engineer would recommend a deep foundation over a shallow foundation, but some of the common reasons are very large design loads, a...
driving rigs. The larger types are used in strip-mining operations to move overburden
Overburden
Overburden is the material that lies above an area of economic or scientific interest in mining and archaeology; most commonly the rock, soil, and ecosystem that lies above a coal seam or ore body. It is also known as 'waste' or 'spoil'...
above coal
Coal
Coal is a combustible black or brownish-black sedimentary rock usually occurring in rock strata in layers or veins called coal beds or coal seams. The harder forms, such as anthracite coal, can be regarded as metamorphic rock because of later exposure to elevated temperature and pressure...
, and for tar-sand mining. Draglines are amongst the largest mobile equipment ever built on land, and weigh in the vicinity of 2000 metric tonne
Tonne
The tonne, known as the metric ton in the US , often put pleonastically as "metric tonne" to avoid confusion with ton, is a metric system unit of mass equal to 1000 kilograms. The tonne is not an International System of Units unit, but is accepted for use with the SI...
s, though specimens weighing up to 13,000 metric tonnes have also been constructed.

A dragline bucket system consists of a large bucket which is suspended from a boom (a large truss
Truss
In architecture and structural engineering, a truss is a structure comprising one or more triangular units constructed with straight members whose ends are connected at joints referred to as nodes. External forces and reactions to those forces are considered to act only at the nodes and result in...
-like structure) with wire rope
Wire rope
thumb|Steel wire rope Wire rope is a type of rope which consists of several strands of metal wire laid into a helix. Initially wrought iron wires were used, but today steel is the main material used for wire ropes....
s.

Does anyone know anyone who would be interested in a LS98A Link-Belt dragline. it had $10,000 spent on it then operator died. new cables & brakes--ver...

I am trying to find out info on what type of draglines are owned and operate in auatralia. Thank andre t

Are Draglines considered Cranes as per safety requirement
More
x