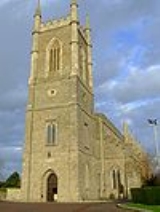 Overview
Downpatrick is a medium-sized town about 33 km (20 miles) south of Belfast
Belfast
Belfast is the capital of and largest city in Northern Ireland. By population, it is the 14th biggest city in the United Kingdom and second biggest on the island of Ireland . It is the seat of the devolved government and legislative Northern Ireland Assembly...
in County Down
County Down
-Cities:*Belfast *Newry -Large towns:*Dundonald*Newtownards*Bangor-Medium towns:...
, Northern Ireland
Northern Ireland
Northern Ireland is one of the four countries of the United Kingdom. Situated in the north-east of the island of Ireland, it shares a border with the Republic of Ireland to the south and west...
. It is the county town
County town
A county town is a county's administrative centre in the United Kingdom or Ireland. County towns are usually the location of administrative or judicial functions, or established over time as the de facto main town of a county. The concept of a county town eventually became detached from its...
of Down with a rich history and strong connection to Saint Patrick
Saint Patrick
Saint Patrick was a Romano-Briton and Christian missionary, who is the most generally recognized patron saint of Ireland or the Apostle of Ireland, although Brigid of Kildare and Colmcille are also formally patron saints....
. It had a population of 10,316 at the 2001 Census
United Kingdom Census 2001
A nationwide census, known as Census 2001, was conducted in the United Kingdom on Sunday, 29 April 2001. This was the 20th UK Census and recorded a resident population of 58,789,194....
. Downpatrick is where Down District Council
Down District Council
Down District Council is a Local Council in County Down in Northern Ireland. The Council is headquartered in Downpatrick. Other towns in the Council area are Ardglass, Ballynahinch, Castlewellan, Clough, Crossgar, Dundrum, Killough, Killyleagh, Newcastle, Saintfield, Seaforde and Strangford...
has its headquarters.
As the largest town in the Lecale
Lecale peninsula
The Lecale peninsula lies in the east of Ulster, on the southeastern side of County Down, covering an area of some between Downpatrick and Dundrum. It is an area of historical and geographic significance, bounded by the Quoile Marshes , the Blackstaff River, the Irish Sea and Strangford Lough...
area, Downpatrick is a commercial, recreational and administrative centre for the locality and serves as a hub for the nearby towns and villages.

What was Downpatrick's purpose when it was first founded?

What was the original purpose of Downpatrick?
More
x