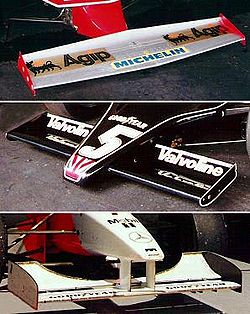 Downforce is a downwards thrust created by the aerodynamic
Aerodynamics
Aerodynamics is a branch of dynamics concerned with studying the motion of air, particularly when it interacts with a moving object. Aerodynamics is a subfield of fluid dynamics and gas dynamics, with much theory shared between them. Aerodynamics is often used synonymously with gas dynamics, with...
characteristics of a car
Čar
Čar is a village in the municipality of Bujanovac, Serbia. According to the 2002 census, the town has a population of 296 people.-References:...
. The purpose of downforce is to allow a car to travel faster through a corner by increasing the vertical force on the tires, thus creating more grip
Grip (autoracing)
Grip is a term describing the total cornering envelope of a race car by the friction of the tire as a function of i.a. the mass of the machine and the downforce generated.-See also:*Lift *Downforce*Bernoulli's principle*Ground effect in cars...
.

The same principle
Bernoulli's principle
In fluid dynamics, Bernoulli's principle states that for an inviscid flow, an increase in the speed of the fluid occurs simultaneously with a decrease in pressure or a decrease in the fluid's potential energy...
that allows an airplane to rise off the ground by creating lift
Lift (force)
A fluid flowing past the surface of a body exerts a surface force on it. Lift is the component of this force that is perpendicular to the oncoming flow direction. It contrasts with the drag force, which is the component of the surface force parallel to the flow direction...
from its wing
Wing
A wing is an appendage with a surface that produces lift for flight or propulsion through the atmosphere, or through another gaseous or liquid fluid...
s is used in reverse to apply force that presses the race car against the surface of the track. This effect is referred to as "aerodynamic grip" and is distinguished from "mechanical grip," which is a function of the car mass repartition, tires and suspension. The creation of downforce by passive devices almost always can only be achieved at the cost of increased aerodynamic drag
Drag (physics)
In fluid dynamics, drag refers to forces which act on a solid object in the direction of the relative fluid flow velocity...
(or friction
Friction
Friction is the force resisting the relative motion of solid surfaces, fluid layers, and/or material elements sliding against each other. There are several types of friction:...
), and the optimum setup is almost always a compromise between the two. The aerodynamic setup for a car can vary considerably between race tracks, depending on the length of the straights and the types of corners; some drivers also make different choices on setup. Because it is a function of the flow of air over and under the car, and because aerodynamic forces increase with the square of velocity, downforce increases with the square of the car's speed and requires a certain minimum speed in order to produce a significant effect. But some cars have had rather unstable aerodynamics, such that a minor change in angle of attack
Angle of attack
Angle of attack is a term used in fluid dynamics to describe the angle between a reference line on a lifting body and the vector representing the relative motion between the lifting body and the fluid through which it is moving...
or height of the vehicle and this can cause large changes in the downforce. In the very worse cases the can cause the car to experience lift, not downforce, for example, caused by a bump on the track or slipstreaming over a crest, and sometimes can have disastrous consequences. A notorious example of this was Peter Dumbreck
Peter Dumbreck
Peter Dumbreck is a racing driver from Scotland.In 1994 he dominated the British Formula Vauxhall Junior championship and followed this in 1996 with a similarly strong performance when he won ten races to take the full Formula Vauxhall Championship.After finishing third in British Formula 3 in...
's Mercedes-Benz CLR
Mercedes-Benz CLR
The Mercedes-Benz CLR was a Le Mans Prototype built by Mercedes-Benz for the 1999 24 Hours of Le Mans. It became infamous for spectacular crashes during its only competitive outing.-Racing history:...
in the 1999 Le Mans 24 hours, which flipped spectacularly after closely following a competitor car over a hump.

Two primary components of a racing car can be used to create downforce when the car is travelling at racing speed:

Most racing formulae have a ban on aerodynamic devices that can be adjusted during a race, except at pit stop
Pit stop
In motorsports, a pit stop is where a racing vehicle stops in the pits during a race for refuelling, new tires, repairs, mechanical adjustments, a driver change, or any combination of the above...
s.

The formula for downforce of a wing is given by:

The rounded and tapered shape of the top of the car is designed to slice through the air and minimize wind resistance. Detailed pieces of bodywork on top of the car can be added to allow a smooth flow of air to reach the downforce-creating elements (i.e., wings or spoilers, and underbody tunnels).

The overall shape of a street car resembles an airplane wing with air flowing over it faster than the air flows under it causing a difference in air pressure. Almost all street cars have aerodynamic lift as a result of this shape. There are many techniques that are used to counter-balance a street car. Looking at the profile of most street cars, the front bumper has the lowest ground clearance followed by the section between the front and rear tires, and followed yet by a rear bumper usually with the highest clearance. Using this method, the air flowing under the front bumper will be constricted to a lower cross sectional area, and thus achieve a lower pressure. Additional downforce comes from the rake (or angle) of the vehicles' body, which directs the underside air up and creates a downward force, and increases the pressure on top of the car because the air flow direction comes closer to perpendicular to the surface. Volume does not affect the air pressure because it is not an enclosed volume, despite the common misconception. Race cars will exemplify this effect by adding a rear diffuser to accelerate air under the car in front of the diffuser, and raise the air pressure behind it to lessen the car's wake. Other aerodynamic components can be found on the underside to improve downforce and/or reduce drag include a splitter and a diffuser
Diffuser (automotive)
A diffuser, in an automotive context, is a shaped section of the car underbody which improves the car's aerodynamic properties by enhancing the transition between the high-velocity airflow underneath the car and the much slower freestream airflow of the ambient atmosphere...
and vortex generators.

The amount of downforce created by the wings or spoilers on a car is dependent primarily on two things:

A larger surface area creates greater downforce and greater drag (also known as air resistance). The aspect ratio is the width of the airfoil divided by its depth. The aspect ratio formula is written like AR=b squared/s, where AR=aspect ratio, b=spand squared, and s=wing area. Also, a greater angle of attack (or tilt) of the wing or spoiler, creates more downforce, which puts more pressure on the rear wheels and more drag. 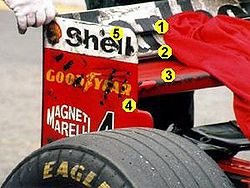 The function of the airfoils at the front of the car is twofold. They create downforce that enhances the grip of the front tires, while also optimizing (or minimizing disturbance to) the flow of air to the rest of the car. The front wings on an open-wheeled car undergo constant modification as data is gathered from race to race, and are customized for every characteristic of a particular circuit (see top photos). In most series, the wings are even designed for adjustment during the race itself when the car is serviced.

The flow of air at the rear of the car is affected by the front wings, front wheels, mirrors, driver's helmet, side pods and exhaust. This causes the rear wing to be less aerodynamically efficient than the front wing, Yet, because it must generate more than twice as much downforce as the front wings in order to maintain the handling to balance the car, the rear wing typically has a much larger aspect ratio, and often uses two or more elements to compound the amount of downforce created (see photo at left). Like the front wings, each of these elements can often be adjusted when the car is serviced, before or even during a race, and are the object of constant attention and modification.

Partly as a consequence of rules aimed at reducing downforce from the front and rear wings of F1 cars, several teams have sought to find other places to position wings. Small wings mounted on the rear of the cars' sidepods began to appear in mid-1994, and were virtually standard on all F1 cars in one form or another, until all such devices were outlawed in 2009. Other wings have sprung up in various other places about the car, but these modifications are usually only used at circuits where downforce is most sought, particularly the twisty Hungary and Monaco racetracks.

The 1995 McLaren Mercedes MP4/10 was one of the first cars to feature a "midwing", using a loophole in the regulations to mount a wing on top of the engine cover. This arrangement has since been used by every team on the grid at one time or another, and in the 2007 Monaco Grand Prix
2007 Monaco Grand Prix
The 2007 Monaco Grand Prix was a Formula One motor race and was the fifth round of the 2007 Formula One season. It took place from 24–27 May at the Circuit de Monaco in Monte Carlo. The race itself commenced at 14:00 CET , Sunday, May 27, and lasted about 1 hour and 40 minutes...
all but two teams used them. These midwings are not to be confused either with the roll-hoop mounted cameras which each car carries as standard in all races, or with the bull-horn shaped flow controllers first used by McLaren and since by BMW Sauber, whose primary function is to smooth and redirect the airflow in order to make the rear wing more effective rather than to generate downforce themselves.

A variation on this theme was "X-wings", high wings mounted on the front of the sidepods which used a similar loophole to midwings. These were first used by Tyrrell in 1997, and were last used in the 1998 San Marino Grand Prix, by which time Ferrari, Sauber, Jordan and others had used such an arrangement. However it was decided they would have to be banned in view of the obstruction they caused during refueling and the risk they posed to the driver should a car roll over. (It is rumored that Bernie Ecclestone saw them as being too ugly on television and therefore had them banned.)

Various other extra wings have been tried from time to time, but nowadays it is more common for teams to seek to improve the performance of the front and rear wings by the use of various flow controllers such as the afore-mentioned "bull-horns" used by McLaren.