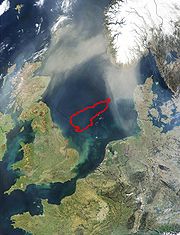 The Dogger Bank incident (also known as the North Sea Incident, the Russian Outrage or the Incident of Hull) occurred when the Russian Baltic Fleet mistook some British trawlers at Dogger Bank
Dogger Bank
Dogger Bank is a large sandbank in a shallow area of the North Sea about off the east coast of England. It extends over approximately , with its dimensions being about long and up to broad. The water depth ranges from 15 to 36 metres , about shallower than the surrounding sea. It is a...
for an Imperial Japanese Navy
Imperial Japanese Navy
The Imperial Japanese Navy was the navy of the Empire of Japan from 1869 until 1947, when it was dissolved following Japan's constitutional renunciation of the use of force as a means of settling international disputes...
force.
The Russians attacked on the night of 21/22 October 1904. Three British fishermen died and a number were wounded. One sailor and a priest aboard a Russian cruiser caught in the crossfire were also killed. The incident almost led to war between Britain and Russia, but it was diplomatically defused.

The Russian warships involved in the incident were enroute to the Far East, to reinforce their 1st Pacific Squadron stationed at Port Arthur, and later Vladivostok
Vladivostok
The city is located in the southern extremity of Muravyov-Amursky Peninsula, which is about 30 km long and approximately 12 km wide.The highest point is Mount Kholodilnik, the height of which is 257 m...
during the Russo-Japanese War
Russo-Japanese War
The Russo-Japanese War was "the first great war of the 20th century." It grew out of rival imperial ambitions of the Russian Empire and Japanese Empire over Manchuria and Korea...
. Because of incorrect reports about the presence of Japan
Japan
Japan is an island nation in East Asia. Located in the Pacific Ocean, it lies to the east of the Sea of Japan, China, North Korea, South Korea and Russia, stretching from the Sea of Okhotsk in the north to the East China Sea and Taiwan in the south...
ese torpedo boat
Torpedo boat
A torpedo boat is a relatively small and fast naval vessel designed to carry torpedoes into battle. The first designs rammed enemy ships with explosive spar torpedoes, and later designs launched self-propelled Whitehead torpedoes. They were created to counter battleships and other large, slow and...
s, submarines and minefields in the North Sea, and the general nervousness of the Russian sailors, 48 harmless fishing vessels were attacked by the Russians, thousands of miles away from enemy waters.

However, the recently developed torpedo boats of the European navies, which did have the potential to wreck large warships, could also strike while nearly invisible. Torpedo boats created a psychological stress on sailors at war, and as early as 1898 during the Spanish-American War
Spanish-American War
The Spanish–American War was a conflict in 1898 between Spain and the United States, effectively the result of American intervention in the ongoing Cuban War of Independence...
, American sailors had opened fire on ocean swells, trains on land, and rocks along the coastline, believing them to be enemy torpedo boats.

Accidents and rumors, which had also dogged the US Navy during their war with Spain
Spain
Spain , officially the Kingdom of Spain languages]] under the European Charter for Regional or Minority Languages. In each of these, Spain's official name is as follows:;;;;;;), is a country and member state of the European Union located in southwestern Europe on the Iberian Peninsula...
in 1898, did not exempt the Russian fleet on their voyage, and there was general fear of attack amongst the sailors, which their command tried to quell by calling for increased vigilance and issuing an order that "no vessel of any sort must be allowed to get in amongst the fleet". This soon led to an incident near the Danish coast unrelated to the Dogger Bank disaster, when fishermen bearing consular dispatches for the fleet were fired on, but escaped unharmed.

The disaster of 21 October began in the evening, when the drunken captain of the supply ship Kamchatka (Камчатка), which was last in the Russian line, took a passing Swedish
Sweden
Sweden , officially the Kingdom of Sweden , is a Nordic country on the Scandinavian Peninsula in Northern Europe. Sweden borders with Norway and Finland and is connected to Denmark by a bridge-tunnel across the Öresund....
ship for a Japanese torpedo boat and radioed that he was being attacked. Later in the night the officers on duty sighted the British ships, interpreted their signals incorrectly and classified them as Japanese torpedo boats, and consequently opened fire on the British fishermen. The British trawler Crane was sunk and two British fishermen lost their lives. On the other boats there were six fishermen wounded, one of whom died a few months later. In the general chaos, Russian ships shot at each other: when the protected cruiser
Protected cruiser
The protected cruiser is a type of naval cruiser of the late 19th century, so known because its armoured deck offered protection for vital machine spaces from shrapnel caused by exploding shells above...
Aurora
Aurora (cruiser)
Aurora is a 1900 Russian protected cruiser, currently preserved as a museum ship in St. Petersburg. She battled the Japanese Navy in the Russo-Japanese War. One of the first incidents of the October Revolution in Russia took place on the cruiser Aurora.-Russo-Japanese War:Aurora was one of three...
(Aврора), which had yet to be involved, approached, she was taken for a Japanese warship, bombarded and slightly damaged. At least one Russian sailor was killed, another badly wounded. A priest aboard a Russian cruiser caught in the crossfire was also fatally wounded. More serious losses on both sides were only avoided by the extremely low quality of Russian naval artillery fire, with one battleship reported to have fired more than 500 shots without hitting anything.


(1) The Skipper could have been JAMES CULLING

(2) The Skipper could have been JOHN NEAL

(3) The Skipper could have been JOHN GOWAN

(4) The Skipper could have been GEORGE WOODGATE or ROBERT DODSON

(5) The Skipper could have been JOHN BROCKLESBY

(6) The Skipper could have been CHARLES SMITH


Other trawlers and questions

The Gamecock trawler Bovic was on its way to join the fleet at the time of the incident, while other trawlers not mentioned are assumed to have been docked in Hull during the incident. They include the Gamecock trawlers Britannic, Hawk, Ibis, Jackdaw, Jay, Parramatta, Prome, Quail and Swallow, and the Leyman trawlers Greta and Mersey. Arthur Credland provides the most accurate information on the incident, but there is evidence that the Kite was at the incident, and it is not clear if there is any evidence of the location of the other trawlers, also he has the Skipper of the Forth as John Gowan but the Fishing Crew List has the Skipper as John Gibbs, this could be a long standing mix up of people with similar names from the inquiry as John Gowan does not seem to have been qualified as a Skipper. Hulltrawler.net has the Greta, Ibis, Mersey and Vigilant at the scene but has other errors and could not provide proof, as is the case with the trawlers Onyx and Swan. 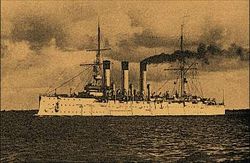 The incident led to a serious diplomatic conflict between Russia and Britain, which was particularly dangerous due to the Anglo-Japanese Alliance
Anglo-Japanese Alliance
The first was signed in London at what is now the Lansdowne Club, on January 30, 1902, by Lord Lansdowne and Hayashi Tadasu . A diplomatic milestone for its ending of Britain's splendid isolation, the alliance was renewed and extended in scope twice, in 1905 and 1911, before its demise in 1921...
. In the aftermath some British newspapers called the Russian fleet 'pirates' and the Russian admiral Zinovi Petrovich Rozhestvenski was heavily criticised for not leaving the British sailors lifeboats. The editorial of the morning's Times was particularly scathing:

"It is almost inconceivable that any men calling themselves seamen, however frightened they might be, could spend twenty minutes bombarding a fleet of fishing boats without discovering the nature of their target."

Royal Navy battleship
Battleship
A battleship is a large armored warship with a main battery consisting of heavy caliber guns. Battleships were larger, better armed and armored than cruisers and destroyers. As the largest armed ships in a fleet, battleships were used to attain command of the sea and represented the apex of a...
s of the Home Fleet were prepared for war, while British cruiser
Cruiser
A cruiser is a type of warship. The term has been in use for several hundreds of years, and has had different meanings throughout this period...
squadrons shadowed the Russian fleet as it made its way through the Bay of Biscay
Bay of Biscay
The Bay of Biscay is a gulf of the northeast Atlantic Ocean located south of the Celtic Sea. It lies along the western coast of France from Brest south to the Spanish border, and the northern coast of Spain west to Cape Ortegal, and is named in English after the province of Biscay, in the Spanish...
. Under diplomatic pressure, the Russian government agreed to investigate the incident, and Rozhestvenski was ordered to dock in Vigo
Vigo
Vigo is a city and municipality in north-west Spain, in Galicia, situated on the ria of the same name on the Atlantic Ocean.-Population:...
, Spain, where he left behind those officers considered responsible (as well as at least one officer who had been critical of him).

On November 25, 1904, the British and the Russian governments signed a joint agreement in which they agreed to submit the issue to the International Commission of Inquiry at the Hague. The commission completed its report on February 26, 1905, in which it criticized Admiral Rozhestvenski for his decision to fire upon the British ships. However, it concluded that "as each (British) vessel swept the horizon in every direction with her own searchlights to avoid being taken by surprise, it was difficult to prevent confusion". It concluded that "the opening of fire by Admiral Rozhestvenski was not justifiable". It also concluded as follows: "the commissioners take pleasure in recognizing, unanimously, that Admiral Rozhestvenski personally did everything he could, from beginning to end of the incident, to prevent
trawlers, recognized as such, from being fired upon by the squadron".

The fishermen eventually received £66,000 from Russia in compensation. In 1906 the Fisherman's Memorial was unveiled in Hull
Kingston upon Hull
Kingston upon Hull , usually referred to as Hull, is a city and unitary authority area in the ceremonial county of the East Riding of Yorkshire, England. It stands on the River Hull at its junction with the Humber estuary, 25 miles inland from the North Sea. Hull has a resident population of...
to commemorate the deaths of the three British sailors. The approx. 18 feet high statue shows the dead fisherman George Henry Smith and carries the following inscription:

Erected by public subscription to the memory of George Henry Smith (skipper) and William Richard Legget (third hand), of the steam-trawler CRANE, who lost their lives through the action of the Russian Baltic Fleet in the North Sea, October 22, 1904, and Walter Whelpton, skipper of the trawler MINO, who died through shock, May 1905.