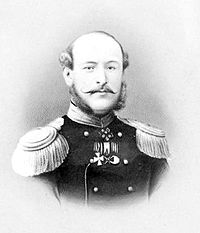 Maksutov was born in the city of Perm
Perm
Perm is a city and the administrative center of Perm Krai, Russia, located on the banks of the Kama River, in the European part of Russia near the Ural Mountains. From 1940 to 1957 it was named Molotov ....
. In 1840, he enrolled in Naval Cadets Corps
Sea Cadet Corps (Russia)
The Sea Cadet Corps , occasionally translated as the Marine Cadet Corps or the Naval Cadet Corps, is an educational establishment for training Naval officers for the Russian Navy in Saint Petersburg.It is the oldest existing high school in Russia.-History:...
, which he graduated in 1847 in the rank of naval cadet. Maksutov was promoted to the rank of lieutenant in March 1851, was assigned to the 46th division and left for the Russian Far East
Russian Far East
Russian Far East is a term that refers to the Russian part of the Far East, i.e., extreme east parts of Russia, between Lake Baikal in Eastern Siberia and the Pacific Ocean...
.

As the Crimean War
Crimean War
The Crimean War was a conflict fought between the Russian Empire and an alliance of the French Empire, the British Empire, the Ottoman Empire, and the Kingdom of Sardinia. The war was part of a long-running contest between the major European powers for influence over territories of the declining...
broke out, he was transferred to Petropavlovsk
Petropavlovsk
Petropavlovsk may refer to:*Petropavlovsk plc, a mining company listed on the London Stock Exchange-Ships:*Battleship Petropavlovsk , Imperial Russia...
in June 1854. Dmitry and his two brothers—Pavel
Pavel Maksutov
Pavel Petrovich Maksutov was an Imperial Russian Navy rear-admiral, prince, hero of Crimean War, 15th governor of Taganrog.Pavel Maksutov was born in Penza into a Russian noble family of Pyotr Ivanovich Maksutov...
and Alexander—took part in the war. Pavel Maksutov served in the Black Sea Fleet
Black Sea Fleet
The Black Sea Fleet is a large operational-strategic sub-unit of the Russian Navy, operating in the Black Sea and the Mediterranean Sea since the late 18th century. It is based in various harbors of the Black Sea and the Sea of Azov....
and was on board the battleship Paris during the Battle of Sinop
Battle of Sinop
The Battle of Sinop, or the Battle of Sinope, took place on 30 November 1853 at Sinop, a sea port in northern Anatolia, when Imperial Russian warships struck and annihilated a patrol force of Ottoman ships anchored in the harbor...
, while Alexander and Dmitry took part in the defense of Petropavlovsk during the siege of Petropavlovsk
Siege of Petropavlovsk
The Siege of Petropavlovsk was the main operation on the Pacific Theatre of the Crimean War. The Russian casualties are estimated at 100 soldiers; the Allies lost five times as many....
. Dmitry Maksutov commanded the legendary cannon battery No. 2, while his brother Alexander commanded the battery No. 3. After the battle, both were awarded with the cross of Order of St. George
Order of St. George
The Military Order of the Holy Great-Martyr and the Triumphant George The Military Order of the Holy Great-Martyr and the Triumphant George The Military Order of the Holy Great-Martyr and the Triumphant George (also known as Order of St. George the Triumphant, Russian: Военный орден Св...
of the 4th degree (posthumously for Alexander Maksutov).

In 1859, Prince Dmitry Maksutov came to Russian America to work for the Russian-American Company
Russian-American Company
The Russian-American Company was a state-sponsored chartered company formed largely on the basis of the so-called Shelekhov-Golikov Company of Grigory Shelekhov and Ivan Larionovich Golikov The Russian-American Company (officially: Under His Imperial Majesty's Highest Protection (patronage)...
. At the beginning he was Assistant to the Governor Johan Hampus Furuhjelm
Johan Hampus Furuhjelm
Johan Hampus Furuhjelm, was a Finnish-Russian vice-admiral and explorer, commander of the Russian Baltic Fleet, Governor of the Russian Far East, Taganrog and Russian America.-Early years:...
, whom he succeeded at the helm of the company in March 1864. After the Alaska purchase
Alaska purchase
The Alaska Purchase was the acquisition of the Alaska territory by the United States from Russia in 1867 by a treaty ratified by the Senate. The purchase, made at the initiative of United States Secretary of State William H. Seward, gained of new United States territory...
, the Russian Imperial flag was lowered, and the Star-Spangled Banner was raised on October 6, 1867. Maksutov was Russian America's last governor. He stayed in what became renamed Alaska for one more year, serving as Russian consul in Sitka and was in charge of the emigration of remaining Russians.