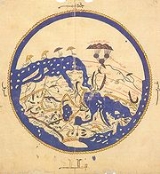 Encyclopedia
Dhul-Qarnayn literally "He of the Two Horns" or "He of the two centuries" is a figure mentioned in the Qur'an
Qur'an
The Quran , also transliterated Qur'an, Koran, Alcoran, Qur’ān, Coran, Kuran, and al-Qur’ān, is the central religious text of Islam, which Muslims consider the verbatim word of God . It is regarded widely as the finest piece of literature in the Arabic language...
, the sacred scripture of Islam
Islam
Islam . The most common are and .   : Arabic pronunciation varies regionally. The first vowel ranges from ~~. The second vowel ranges from ~~~...
, where he is described as a great and righteous ruler who built a long wall that keeps Gog and Magog
Gog and Magog
Gog and Magog are names that appear primarily in various Jewish, Christian and Muslim scriptures, as well as numerous subsequent references in other works. Their context can be either genealogical or eschatological and apocalyptic, as in Ezekiel and Revelation...
from attacking the people who he met on his journey to the east (i.e., the rising of the sun). According to a classical interpretation, the name is due to his having reached the two 'Horns' of the Sun, east and west, where it rises and where it sets" during his journey.

The story of Dhul-Qarnayn appears in sixteen verses of the Qur'an, specifically verses 18:83-98:

The Quraysh sent An-Nadr bin Al-Harith and `Uqbah bin Abi Mu`it to the rabbi
Rabbi
In Judaism, a rabbi is a teacher of Torah. This title derives from the Hebrew word רבי , meaning "My Master" , which is the way a student would address a master of Torah...
s in Al-Madinah, and told them: `Ask them (the rabbis) about Muhammad, and describe him to them, and tell them what he is saying. They are the people of the first Book, and they have more knowledge of the Prophets than we do.' So they set out and when they reached Al-Madinah, they asked the rabbis about the Messenger of Allah. They described him to them and told them some of what he had said. They said, `You are the people of the Tawrah and we have come to you so that you can tell us about this companion of ours.' They (the rabbis) said, `Ask him about three things which we will tell you to ask, and if he answers them then he is a Prophet who has been sent (by Allah); if he does not, then he is saying things that are not true, in which case how you will deal with him will be up to you. Ask him about some young men in ancient times, what was their story for theirs is a strange and wondrous tale. Ask him about a man who travelled a great deal and reached the east and the west of the earth. What was his story And ask him about the Ruh (soul or spirit) – what is it If he tells you about these things, then he is a Prophet, so follow him, but if he does not tell you, then he is a man who is making things up, so deal with him as you see fit.http://www.tafsir.com/default.asp?sid=18&tid=29908

This Surah was sent down in answer to the three questions which the mushriks of Makkah, in consultation with the people of the Book, had put to the Holy Prophet in order to test him. These were: (1) Who were "the Sleepers of the Cave"? (2) What is the real story of Khidr? and (3) What do you know about Dhul-Qarnain? As these three questions and the stories involved concerned the history of the Christians and the Jews, and were unknown in Hijaz, a choice of these was made to test whether the Holy Prophet possessed any source of the knowledge of the hidden and unseen things. Allah, however, not only gave a complete answer to their questions but also employed the three stories to the disadvantage of the opponents of Islam in the conflict that was going on at that time at Makkah between Islam and un-belief.http://www.translatedquran.com/SurahIntro.asp?sno=18 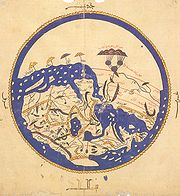 Differences Between Alexander the Great and Dhul-Qarnayn

Azad also rejected what it already belongs to Qahtaan Arabic Yemen
Yemen
The Republic of Yemen , commonly known as Yemen , is a country located in the Middle East, occupying the southwestern to southern end of the Arabian Peninsula. It is bordered by Saudi Arabia to the north, the Red Sea to the west, and Oman to the east....
, on the basis that the question of the Jews by the Prophet was with a view to embarrass him, even if the Arabs of Quraish were aware of it and asked what was miraculous.

Azad builds his theory on the basis that the origin of the name "Dhul-Qarnayn" comes from the name stated in the Torah is "Haqqərānayim" which is launched by the name of the Jews to Cyrus, to show tolerance to them when his predecessors had been unjust to them.